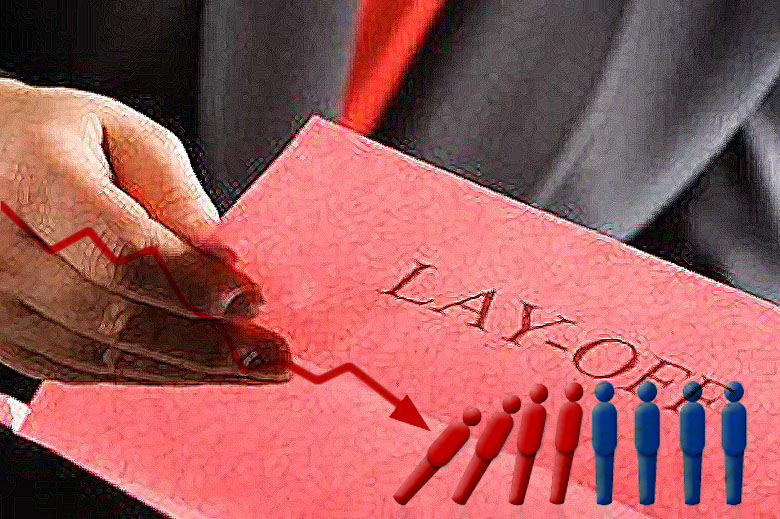 It’s getting harder to keep the earrings on this lipsticked pig of an economy.

While we await for the BLS to report another seasonally adjusted Initial Claims report which will be near multi-decade lows, a far more disturbing report was released moments ago by outplacement consultancy Challenger Gray, which has done a far better job of compiling true layoff data, and which reported that in July there was a whopping 105,696, up 136% from the 44,842 job cuts in June, and the highest in nearly four years, or since September 2011, which the last time there were more than more than 100,000 layoffs.

Worse, the July surge brings the year-to-date job cut total to 393,368, which is 34% higher than the 292,921 cuts announced in the first seven months of 2014. This represents the highest seven-month total since 2009, when 978,048 job cuts were announced amid the worst recession since the Great Depression.

Finally, this was the worst July for layoffs in over a decade.

And while we expect energy-sector terminations to take center stage in the coming months following the resumed plunge in energy prices, the July surge in layoffs came from an unexpected source: the US Army.

According to Challenger, more than half of the July job cuts were the result of massive troop and civilian workforce reductions announced by the United States Army. The cutbacks will eliminate 57,000 from government payrolls over the next two years.

The bigger problem is what happens to all those energy sector jobs which were spared in the last moment after oil launched its dead cat bounce earlier this year and which has been fully faded at this moment. In July only 8,878 oil-related jobs were cut, which is a far cry from the 21K monthly peak early in the year. Expect those same numbers to be promptly surpassed.

SCHLUMBERGER ANNOUNCES ANOTHER ROUND OF LAYOFFS

The oil service company says it plans to cut another 11,000 jobs worldwide. It did not specify how many of those jobs are in the Houston area.

In January, the company said it was laying off 9,000 employees in response to plunging oil prices. This second round of layoffs brings the total number of job reduction to about 15 percent.

Barclays plans to cut more than 30,000 jobs: The Times

“Well, the idea that America is in the midst of a great recovery is pure fiction. It’s a lie. It’s a jobless recovery,” Wynn said. “Because recoveries are marked by the level of real employment. And if you count the people who have left the work force, real unemployment is 15 to 20 percent.”

It sounds like IBM layoffs are still going on

US layoffs mount amid signs of economic slowdown

US corporations announced thousands of layoffs this week amid a series of plant closures, mergers and consolidations and signs of declining economic growth.

On Wednesday, US Steel announced 2,080 layoffs at its Granite City Works in Illinois. The Pittsburgh-based steelmaker plans to lay off over 4,500 employees nationwide, including over 1,800 workers in Alabama. Job cuts are also planned in Minnesota and Texas.

The same day, steelmaker Worthington Industries of Columbus, Ohio announced plans to lay off 555 employees nationwide. Of these, 310 are to lose their jobs as a result of the closure of a plant in Florence, South Carolina.

The steel companies said the layoffs were a response to a fall in demand stemming from the drop in oil prices and appreciation of the dollar, which have led to a reduction in international orders.

Also on Wednesday, HJ Heinz announced plans to buy Kraft Foods Group in a $36.6 billion deal that, according to one analyst, could lead to 5,000 job cuts, affecting nearly one quarter of Kraft’s North American work force.

The fate of tens of thousands of RadioShack workers and their families hung in the balance Friday as lenders and hedge funds wrangled at auction over the remains of the bankrupt consumer electronics chain, which presently employs 27,000 people at more than 4,000 locations nationwide.

Salus Capital Partners said Friday that it had outbid its nearest competitor, hedge fund Standard General, offering $271 million in cash as part of a plan that would completely dismantle the company, laying off all employees and selling off inventory and fixtures. Standard General had offered $16 million in a plan that would have kept 1,740 stores open, saving 7,500 jobs, but still laying off nearly 20,000 workers.

Office supply retailer Staples, which announced plans to merge with Office Depot in February, filed documents with the Securities and Exchange Commission showing that it intends to pay CEO Roland Smith $46.78 million for 16 months of work if the deal goes through. The merger would entail the closure of up to 1,000 stores and the potential layoff of tens of thousands of workers.

The plant closures and layoffs came as figures from the Commerce Department confirmed that the US economy slowed significantly in the fourth quarter of last year. The economy grew at an annual rate of 2.2 percent in the final three months of 2014, down from an initial estimate of 2.6 percent released in January.

The fourth quarter marked a significant slowdown compared with the second quarter, in which the economy grew at a 5 percent rate, and the third quarter, which had a growth rate of 4.6 percent. Analysts had expected the economy to grow at a 2.4 percent annual rate in the final quarter of last year.

Business investment on equipment in the fourth quarter was revised downward to show a 0.6 percent increase, down from a previously reported 0.9 percent. Reuters reported that the slowdown in investment likely reflected “the impact of the strong dollar and lower crude oil prices, which have caused a drop in drilling and exploration activity.”

Government spending contracted at a rate of 1.9 percent, led by cuts to federal spending.

Even the anemic pace of economic growth in the last quarter of 2014 was significantly higher than what is expected in the first quarter of this year, which ends next week. Economists from JPMorgan Chase, Macroeconomic Advisers and Goldman Sachs recently cut their estimates for first-quarter economic growth, all of them forecasting a rate of 1.4 percent to 1.5 percent. The Federal Reserve Bank of Atlanta is predicting even worse results, with a first-quarter GDP growth rate of just 0.2 percent.

A number of recently released economic figures underscore this gloomy outlook. The Commerce Department said Wednesday that orders for durable goods fell by 1.4 percent in February compared with a month earlier. The report also showed that non-defense capital goods orders fell for the sixth straight week.

The University of Michigan’s survey of consumer sentiment fell to 93.0 in March, down from 95.4 in February. Richard Curtin, chief economist at the University of Michigan’s Surveys of Consumers, told the Wall Street Journalthat, “most of the recent variation was among lower-income households, whose budgets are more sensitive to higher utility costs and disruptions in work hours.”

The significant appreciation of the dollar, which hit 0.95 euros earlier this month, up from 0.75 euros a year ago, has had a negative impact on the US trade balance and US corporate earnings.

US corporations have responded to the appreciation of the dollar and falling profits with the demand that the Federal Reserve delay its plans to begin raising interest rates this year. Last week, Fed Chairwoman Janet Yellen hinted that the US central bank might begin raising rates later than it had previously indicated, and the Fed issued interest rate projections for 2015 and beyond showing a slower pace of rate hikes than previously predicted once the increases begin.

Yellen reinforced this message in remarks at the Federal Reserve Bank of San Francisco on Friday, declaring that she expected the “level of the federal funds rate to be normalized only gradually” and warning of raising rates “too quickly.”

The continued influx of cash from the Federal Reserve has led the Dow Jones Industrial Average to nearly triple over the course of the past six years, while allowing Wall Street bonuses to hit the highest levels since 2008. Average CEO pay in the US is higher than ever.

The response of the corporate-financial aristocracy to the renewed slowdown in the US economy will no doubt be an intensification of the policies that have characterized official economic policy since the 2008 crash: virtually unlimited amounts of cash for the financial markets coupled with a relentless offensive against the jobs, wages and living standards of working people.