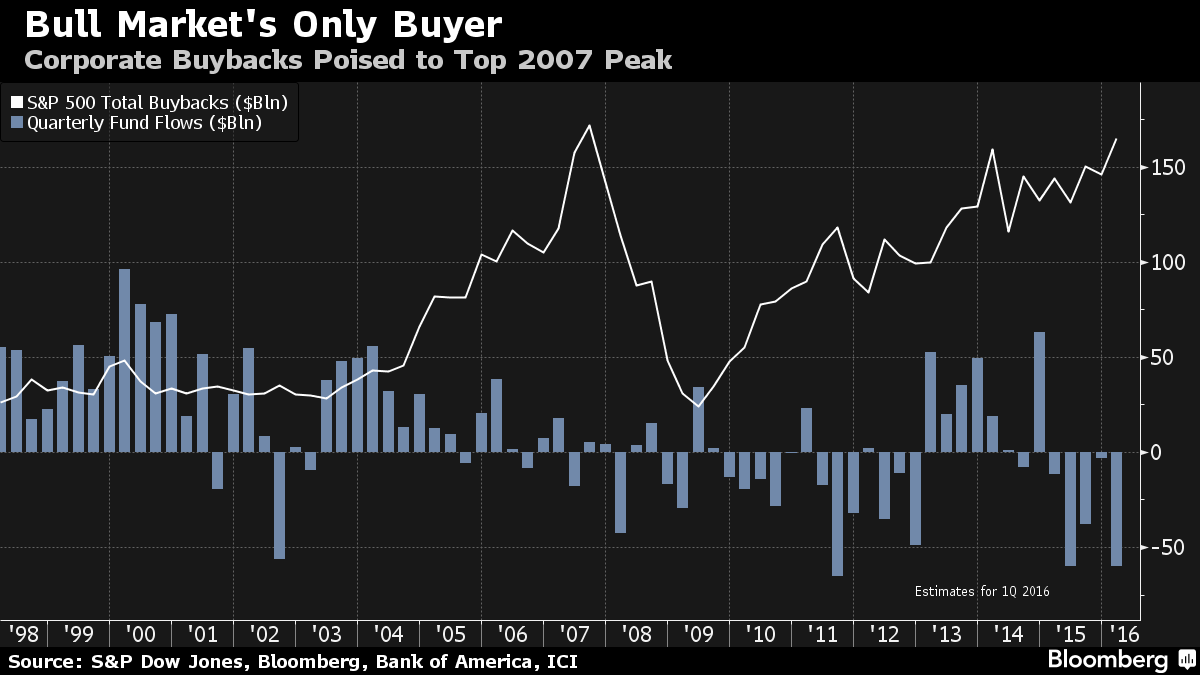 by Bill Bonner of Bonner & Partners

The Dow rose the fifth week in a row last week, ending with a 120-point jump on Friday. This has put the index firmly in the black for 2016. Well, this is a showdown, isn’t it?

Either us… or the great mass of investors – one of us is wrong. In the weeks to come, we’ll find out who (notice to new readers: It could go either way). But wait a minute…

Our old friend Rob Marstrand, who writes at Of Wealth.com, explains why the great mass of investors has little to do with it. Apparently, corporations have nothing better to do with their money than buy their own shares.

“There’s a dirty little secret in the U.S. stock market. Corporate America is paying out more cash to shareholders than it earns in profits. This means there’s nothing left to invest in business growth. It also means debt levels are going up, increasing risk…

Analysis by Bloomberg shows that those companies are on track to spend $590 billion a year on buybacks in 2016, at the first-quarter rate. That would be even more than the last point of peak buybacks – at the previous market top in 2007, just before the last crash. Put simply, companies are spending record amounts of cash on buybacks at precisely the wrong time (as usual): when stocks are extremely expensive.”

Corporate buybacks vs. other fund flows – corporations are the market’s main remaining prop, by buying back their own stock on credit at insane prices.  They are doing this in order to flatter earnings per share amid a complete lack of top-line growth and declining profits. What’s the point? The stock options managers pay themselves, which are only worth something if stock prices hold up. If that requires destroying balance sheets and shareholder value, so be it.

It’s an Alice in Wonderland world. Everything is nonsense. Stocks are going up. That should mean things are looking up for business. Which should mean that companies have plenty of worthwhile new capital investments to make – new machinery, new factories, new products, and more distribution.

Time is the ultimate unyielding human resource. And the ultimate measure of how wealthy a society is how much you can get paid per hour. Cometh another depressing report for millennials from conservative website Red Alert Politics:

The chart shows the income situation of the 20-24 and 25-29 age brackets relative to the national average across the world as of 2013. Although slightly dated, we assure you the situation hasn’t gotten any better since then. It is by far worst in the US, which partly explains why Mr. Sanders is so appealing to youngsters – click to enlarge.

Not that we’re going to whine on behalf of the young. They’re doing their own whining at the ballot box. The youngest voters are going for the oldest candidate: democratic socialist Bernie Sanders. But what entertains us today is the nonsense of the entire system.

It begins with phony money. Dollars are supposed to represent wealth. How do you get wealth? By working, investing, and saving, right? But after 1971 – when President Nixon ended the direct convertibility of dollars to gold – the Fed created new dollars with no wealth backing them. Post-1971 dollars are IOUs from Uncle Sam, nothing more. The Fed carries them on its books as a liability.

Then there is the problem of phony savings. In a healthy economy, you earn money, and you save part of it. This can be lent out, as credit, to fund new projects and earn interest. Savings – and credit – are limited. They are based on real surplus wealth.

But in today’s mad system, central banks and banks create credit out of thin air… using nothing but keystrokes on a computer. No savings are needed. Savers might as well not bother. Thanks to the Fed’s regime of ultra-low interest rates, over the past 10 years, Bloomberg estimates that about $8 trillion has been confiscated from savers – money they should have earned in interest.

On top of this, the government has a phony fiscal policy. It borrows phony money from banks in return for Treasury bonds. Under QE, the Fed then buys these bonds from the banks. The Treasury then pays the Fed interest on these bonds… the Fed then gives this interest back to the Treasury.

Neat, huh? It’s free money for the feds. They borrow nothing for nothing… and everyone pretends it’s real.

This is all made possible by phony monetary policy. The Fed sets interest rates at the lowest levels in history. So borrowers – especially the largest borrower in history, the U.S. government – can get funds cheaply.   This is done to strengthen the economy, but the economy grows weaker under the burden of so much more debt.

This all leads to a phony stock market, in which corporate bosses use the cheap money to loot their own businesses. Companies borrow heavily to buy back their own shares and cancel them. This increases the earnings per share of the outstanding shares, boosting their value.

Top execs then collect fat bonuses based on rising share prices. Shareholders get a temporary boost as their stocks go up, but their businesses are weakened by the additional debt.

And the entire system creates phony wealth. This is not capitalism. It’s phony, crony capitalism. Its phony money leads to phony investments – short-term speculations… scams… and rent seeking. These do not build real wealth; they extract real wealth from the rest of the economy and shift it to the well-connected sectors.

Here’s how it works in housing, for example. The banks get the phony money and lend it to house buyers. They collect interest on “money” that cost them next to nothing. Naturally, they lend more and more… in order to maximize their own income. This leads to rising house prices… and eventually, a bust, when too many people own too much money on houses they can’t really afford.

This is what happened in 2007. Home buyers couldn’t make their payments. Home prices fell. Families lost their homes. And then, even the banks were in trouble. So, the Fed came and bailed out the banks, so the extraction could continue.

And today, almost every one of America’s taxpayers continues to make payments to the credit industry – for student loans, housing loans, auto loans, credit cards – transferring more and more real wealth from the people who earned it to the privileged elite.

But it is not just Wall Street that comes out ahead. The entire Deep State complex is at the heart of the nonsensical, corrupt, and fraudulent system… Expecting the Mad Hatter to protect you? Or the Cheshire Cat?

Good luck with that!