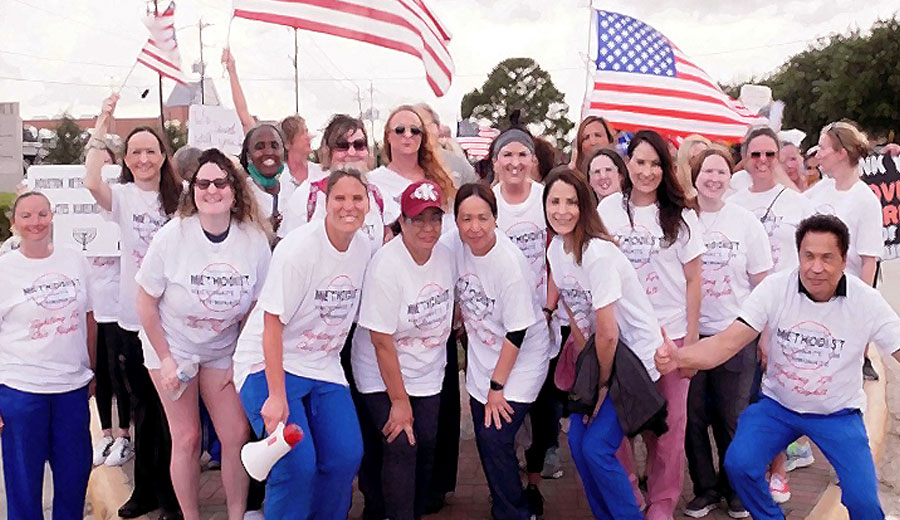 VIDEO: On Monday June 7, 2021, more than a hundred hospital employees and supporters gathered at the Baytown Methodist campus east of Houston, Texas to protest the hospitals firing of nurses who say no to the COVID shots. Derrick Broze documented and interviewed nurses and a doctor.

by Derrick Broze via thelastamericanvagabond.com

The Houston Methodist hospital operates eight hospitals with more than 26,000 employees. On March 31, Methodist CEO Dr. Marc Boom announced that the shots – which have not received approval by the US Food and Drug Administration – would be mandatory for all employees. Houston Methodist hospital employees were told to take the shots by June 7th or lose their jobs. Methodist also required hospital managers to have at least one COVID shot by April 15th. Those who chose not to receive the treatments by Monday now have 2 final weeks before they will officially be fired.

“Mandating the vaccine was not a decision we made lightly. … Because science has proven that the Covid-19 vaccines are not only safe, but extremely effective, it became an easier decision to make,” Boom wrote in a letter to staff in April.

Despite reassurances from Boom, 117 employees filed suit against Houston Methodist for “forcing its employees to be human ‘guinea pigs’ as a condition for continued employment” by requiring an experimental treatment which has only been authorized for emergency use.

Jennifer Bridges is one of the nurses leading the charge. In recent months she has become the public face of the hospital employees’ fight against mandates they see as unconstitutional. On Monday evening, Bridges walked out of the Baytown Methodist hospital to a crowd of cheering supporters. “I am sad, I am happy, I am proud,” Jennifer said as she exited the parking lot for the final time.

Bridges stated that the hospital attempted to “bribe” employees with cash and required those receiving the injection to sign a waiver stating they would not hold Methodist hospital liable if they were to experience an adverse reaction. She says that nurses who treated COVID-19 patients in 2020 are now treating patients who have had reactions to the shots.

“We’ve already had nurses who took the vaccine – whether they wanted to or were forced – and so many have come down with adverse reactions. I’ve already heard from nurses who have had miscarriages,” Bridges stated during an interview with Free Thinker Radio.

Bridges was joined by nurses and doctors from the Houston area, including fellow employees from the various Houston Methodist campuses. One such Methodist nurse was Lacey Guedry. “I don’t think a mandated vaccine is ethical. At the very least I think it violates our basic liberties and freedoms, especially with institutions claiming to be practicing evidence based medicine,” said Guedry. “The WHO recently went on record saying that natural infection provides superior or equal protection that the vaccine does. So if we are going to follow “science” why are we neglecting this information?”

Although the lawsuit was filed in Texas state court it was recently transferred to a Houston federal court, a move that has been called unusual by the plaintiffs attorneys. On Friday, U.S. District Judge Lynn Hughes denied a temporary restraining order which would have prevented the Houston hospital system from firing the employees until the case is worked out.“The plaintiffs are not just jeopardizing their own health; they are jeopardizing the health of doctors, nurses, support staff, patients and their families,” Hughes wrote.

Courthouse News reports that Judge Hughes “appears ready to dispose of the lawsuit” after he authorized Houston Methodist to file a motion to dismiss the lawsuit. A hearing is scheduled for Friday June 11.

In the lawsuit Bridges and the other plaintiffs argue that, “There were 4,434 death reports and over 12,619 serious injuries reported to the CDC’s VAERS [Vaccine Adverse Event Reporting System] database from Covid-19 vaccines through May 10, 2021”, which has since risen to  5,165 deaths and 25,359 serious injuries through May 28, 2021. The plaintiffs argue that they are protected by a 1985 Texas Supreme Court decision in the case Sabine Pilot Service Inc. v. Hauck. In that case the court found that employees could sue if the only reason they were fired was for refusing to do an illegal act. They also argue that the hospitals mandate violates federal laws on authorizing medical products in emergencies.

I spoke with a nurse at Houston Methodist whose medical exemption was approved who supported the employees right to say no to the shots. “I’m here to show support for my fellow Methodist employees who were not allowed a choice in their medical care. They were bullied and bribed into taking a vaccine,” she said on Monday afternoon. “Luckily they approved my exemption, but there have been many, many which have not been approved.”

One of the nurses who had her exemption request denied was Melissa Smith of the Clear Lake Methodist Hospital.

“Friday was my last day. Tomorrow I will sign my suspension and then they will give me 2 weeks to take the J & J vaccine. I am not going to get the vaccine and they will fire me,” Smith told TLAV. She applied for a religious exemption from the treatment and was denied. “This was under our Director of the Operating Room and the manager of my department. They gave us specific instructions on how to fill out the exemption form. So many of us did and all were denied. We all received the blanket email. I actually believe no one even read it.”

Smith estimated that the number of nurses at her hospital requesting religious exemption was in the 40’s.

“I am really here for the people who have cried, the people I have prayed with who got vaccinated because they felt they didn’t have a choice,” Smith stated while the crowd of supporters gathered outside the Baytown Methodist Hospital. “They didn’t have a voice, they felt they had nowhere to go. I am hoping that this kind of action gives them that voice and gives us choices.”

more from Derrick Broze can be found here: theconsciousresistance.com

For more regarding the difference between EAU-Emergency Use Authorization and FDA Approval Please also see: Covid Vaccine Sense or Nonsense
the following is an excerpt…

MANDATING VACCINATION UNDER EMERGENCY USE AUTHORIZATION IS IMPERMISSIBLE

An EUA is not “FDA Approval.”

An EUA indicates that a product has not been fully tested but, despite the obvious risks, distribution is permitted because the government declared a “public health emergency” in January 2020.

As the FDA notes in its Information Sheet for the Moderna shot:

The Moderna COVID-19 Vaccine has not undergone the same type of review as an FDA- approved or cleared product.”

The FDA granted EUAs for all three experimental vaccines after less than five months of clinical trials, with most of trial data still to be collected. All three vaccines will be in clinical trial status through January 31, 2023.

These experimental gene altering injections are only authorized due to the declared state of emergency. There can be no state of emergency if there are effective authorized treatments for covid. Many experts are being silenced and censored regarding their successful use of Ivermectin in early stages of symptomatic infections.

It seems that the vaccine manufacturers and many governments are desperate to protect their pro-vaccine agenda and will attempt to censor information and news regarding the efficacy of Ivermectin.

You will NEVER be “fully vaccinated”