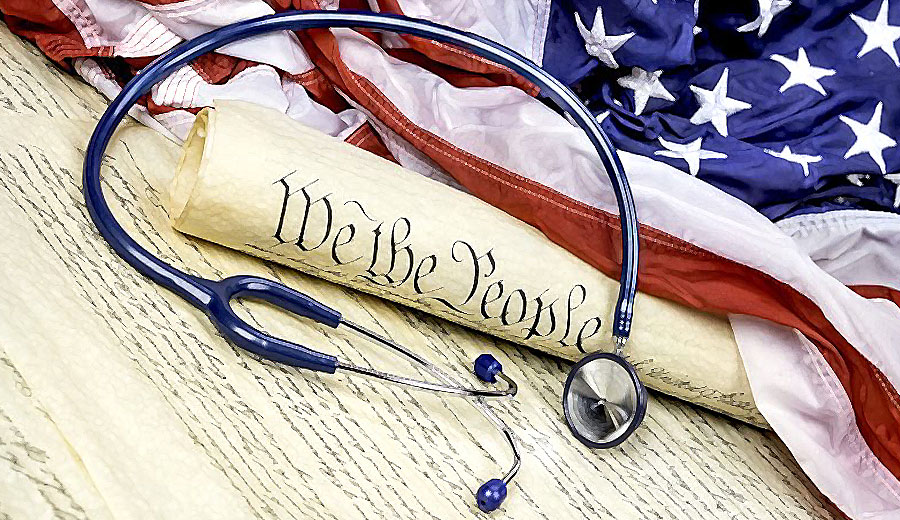 In a “deeply disturbing” speech last week, President Biden exhorted medical coercion of an experimental gene therapy for a virus with a 99% survival rate for a large portion of the population, and for which no one bears financial liability in cases where injuries or deaths occur.

How’s this going to ‘protect the vaccinated from the unvaccinated’ on Capitol Hill?

Biden announced the Department of Labor will require employers with 100 or more employees to require shots or testing Thursday evening https://t.co/0LPOxr9bNQ pic.twitter.com/cDH7ndhdIx

If the “vaccine” actually worked, wouldn’t the vaccinated already be protected from the unvaccinated?  And if it doesn’t work (which we already know from extensive data from the most vaccinated countries and regions) then why are they so hell bent to stick everyone (except themselves, of course) with it?

Everyone's gotta do this weird, super tense, phoney happy smiley dance about how perfect and not-at-all-disappointing the vaccine is, because being truthful about how disappointed you feel hurts the vaccination campaign and therefore means you're worse than Hitler. Big smiles!!! pic.twitter.com/83ZtJeiGIm

President Biden’s speech last week was stunning. As the Associated Press aptly reported, the president pivoted from a war on the coronavirus to a war on the “unvaccinated.”

Coercing the “unvaccinated” was the president’s first and foremost point — the only way back to normal is through vaccination, testing and masks, he said.

But the president went much further — he vilified the unvaccinated. They are not “doing the right thing.” They are “keeping us from turning the corner.” They are “blocking public health.”

“The refusal [of the unvaccinated] has cost all of us,” Biden said.

Addressing the 80 million refusers, the president said, as if speaking to unruly children, “our patience is wearing thin.”

He went further still, empathizing with the anger and anxiety of those who’ve been vaccinated and thus presumably protected. He threatened, “We cannot let the unvaccinated undo this progress,” although he muddled the words in delivery.

Biden also took a potshot at dissenting doctors, suggesting they are “conspiracy theorists,” not “real doctors.” His comments echoed the calls of others, including the Federation of State Medical Boards, to take away the medical licenses of doctors who dare to raise questions about vaccine safety.

The president’s speech was deeply disturbing. He exhorted medical coercion of an experimental gene therapy for a virus with a 99% survival rate for a large portion of the population, and for which no one bears financial liability in cases where injuries or deaths occur.

Furthermore, Biden misled the public on vaccine approval. He suggested that because the U.S. Food and Drug Administration (FDA) approved the Pfizer Comirnaty vaccine on Aug. 23, there’s nothing more for the unvaccinated to “wait for.”

However, the FDA has not licensed the Moderna, Johnson & Johnson (marketed as Janssen) and Pfizer-BioNTech vaccines, and the licensed Pfizer Comirnaty vaccine is largely unavailable in the U.S.

The shots that are available are overwhelmingly Emergency Use Authorizationonly, to which federal law requires the right of refusal, under Title 21 U.S.C. § 360bbb-3(e)(1)(A)(ii)(III) of the Federal Food, Drug, and Cosmetic Act.

As The Defender reported last month, the administration’s gambit on licensure is a cynical bait-and-switch tactic.

The president’s speech announced the full weight of the federal government against those who lawfully reject an unwanted, experimental medical intervention. Worse still, he sought to enlist the vaccinated in this divisive and dangerous campaign.

Medical decision-making must be individual and individualized, and occur in the context of the doctor-patient relationship. No medical intervention can be safe and effective for all, as the president suggested. Science does not support dividing people by vaccination status and discriminating on that basis, as the president purported — nor do law or ethics support damaging discrimination.

The president failed to respect the individual rights to informed consent. The Nuremberg Code, which the U.S. promulgated and has expanded over time, says it best: “The voluntary consent of the human subject is absolutely essential.”

Suggesting the “large majority of Americans” may demonize and marginalize a minority for rejecting experimental medicine is abhorrent.

But what did President Biden really mean when he talked about the “unvaccinated?” Are people who refuse COVID shots actually unvaccinated?

No. The vast majority have had many vaccines during their lifetimes: polio, diphtheria, tetanus, pertussis, measles, mumps, rubella, hepatitis B, influenza and a battery of other ones. They simply have chosen not to take experimental COVID shots that have not yet finished phase 3 clinical trials (Moderna’s trials go to 2022, Pfizer’s until 2023) and that have blanket liability protection for manufacturers, healthcare providers and government officials.

Suggesting the government or the majority is entitled to marginalize the minority on COVID vaccination grounds is shocking.

The president’s final blessing to those “on the front lines of this pandemic” and to “our troops” was particularly painful, because it is precisely these people with deep knowledge of the disease and the vaccines who are refusing the shots in large numbers, and who now are at risk of their livelihoods.

These people who put their lives on the line during the pandemic are being asked to lose everything if they exercise their right to refuse this medical treatment.

What can we do?

Based on President Biden’s speech, the next few months may be challenging. Here’s what you can count on from CHD:

Please support our work in any way you can. Thank you.