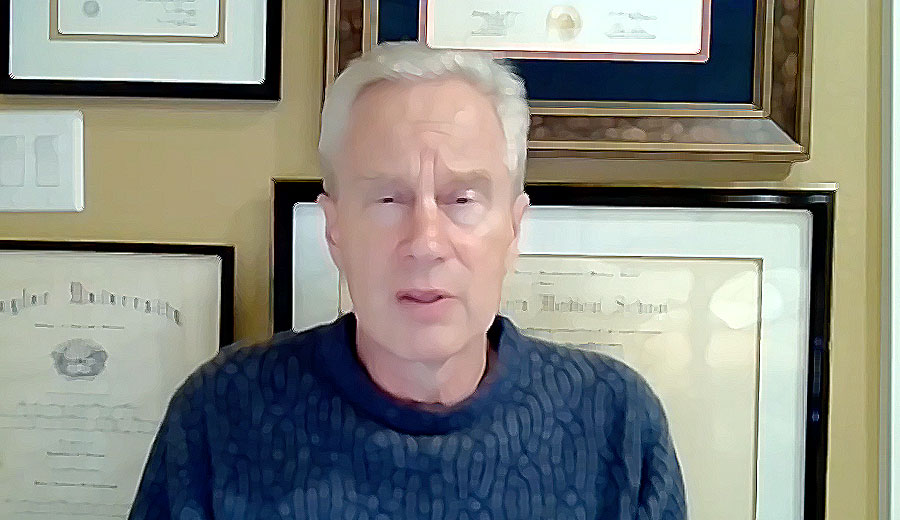 Authored by Art Moore via WND.com,

Dr. Peter McCullough – a renowned cardiologist and highly published medical scientist whose confrontation of the government’s COVID-19 policies has drawn more than 40 million views on Joe Rogan’s podcast – told WND in a video interview Thursday night the official pandemic narrative that has been fiercely guarded by establishment media and social-media censors is “completely crumbling.”

That narrative, he said, included “false statements regarding asymptomatic spread, reliance on lockdown and masks – which obviously didn’t work – the suppression of early treatment, the mass promotion of vaccines that failed.”

“And now here we are, almost in complete free fall,” McCullough said, referring to the record number of COVID-19 cases as officials acknowledge the vaccines don’t prevent infection or transmission.

McCullough noted that in California, with the more contagious but much milder omicron variant now dominant, health care workers who tested positive for COVID-19 and had symptoms were told to go back to work.

“The vaccines should be pulled off the market. They clearly are not solving the problem.”

The focus, he said, should be on “treating high-risk patients who develop symptoms” with some of the early treatments that he and other physicians around the world have found to be effective, including ivermectin and a new drug granted emergency use authorization by the FDA, Paxlovid.

McCullough cited a study from Denmark and data from the U.K.’s health agency showing that the vaccines have zero effectiveness against omicron.

“That’s not misinformation,” he said. “I’m just quoting the data. All of this can be looked up. Fact-checkers can look at it. I know I’ll never have any problems with allegations of misinformation, because I just quote the data.”

President Biden clearly had McCullough in mind when on Thursday he urged social media companies and media outlets to “please deal with the misinformation and disinformation that’s on your shows. It has to stop.”

McCullough pointed out his work has been relied upon by courts across the nation, including the U.S. Supreme Court, and he has testified to the U.S. Senate and will be back there later this month.

“I think America knows who is giving them the straight story.”

In the half-hour video interview with WND (embedded below), McCullough also discussed:

“I think Americans are going to understand that their individual choice is really what’s going to matter in the end,” he McCullough told WND in conclusion. “If Americans decide that they’re not going to take any boosters or any more vaccines, it doesn’t matter how many mandates or how many court decisions that happen. The vaccine program is going to crumble. I think it’s just a matter of saying no.”

He emphasized that the vaccines are still “research.”

“No one can be forced into it,” he said of vaccination. “And they’re not turning out to be safe or effective. So, if  everybody just stands firm and declines the vaccines, I think that will be the quickest way for us to get out of this.”

McCullough, in a video interview with WND in December, called for a “pivot” from the current policies to early treatment and “compassionate care” for those who have COVID or have suffered vaccine injuries, which have included myocarditis, neurological issues and blood clotting.

“Now is the time for doctors to step up. Now is not a time for rhetoric or harsh statements regarding scientific discourse,” he said.

Many of McCullough’s 600 peer-reviewed publications have appeared in top-tier journals such as the New England Journal of Medicine, Journal of the American Medical Association and The Lancet. He testified to the U.S. Senate in November 2020 against what he described as the federal government’s politicization of health care during the pandemic, curbing or blocking the availability of cheap, effective treatments. In a speech in September, he told of having been stripped of the editorship of a Swiss-based journal after having lost his position with a major health system, “with no explanation and no due process.” Baylor University Medical Center fired him in February. And Texas A&M College of Medicine, Texas Christian University and University of North Texas Health Science Center School of Medicine have cut ties with McCullough, accusing him of spreading misinformation.

All because of his “lawful” participation “in a topic of public importance.”

He said there are “powerful forces at work, far more powerful than we can possibly think of, that are influencing anybody who is in a position of authority.”

McCullough is the chief medical adviser for the Truth for Health Foundation, a physician-founded charity that says it is “dedicated to following the Oath of Hippocrates to serve individual patients to the best of our ability and judgement and to uphold the highest standards of medical ethics.”

Last year, America’s doctors, nurses and paramedics were celebrated as frontline heroes battling a fearsome new pandemic. Today, under Joe Biden, tens of thousands of these same heroes are denounced as rebels, conspiracy theorists, extremists and potential terrorists. Along with massive numbers of police, firemen, Border Patrol agents, Navy SEALs, pilots, air-traffic controllers, and countless other truly essential Americans, they’re all considered so dangerous as to merit termination, their professional and personal lives turned upside down due to their decision not to be injected with the experimental COVID vaccines. Biden’s tyrannical mandate threatens to cripple American society – from law enforcement to airlines to commercial supply chains to hospitals. It’s already happening. But the good news is that huge numbers of “yesterday’s heroes” are now fighting back – bravely and boldly. The whole epic showdown is laid out as never before in the sensational October issue of WND’s monthly Whistleblower magazine, titled “THE GREAT AMERICAN REBELLION: ‘We will not comply!’ COVID-19 power grab ignites bold new era of national defiance.”