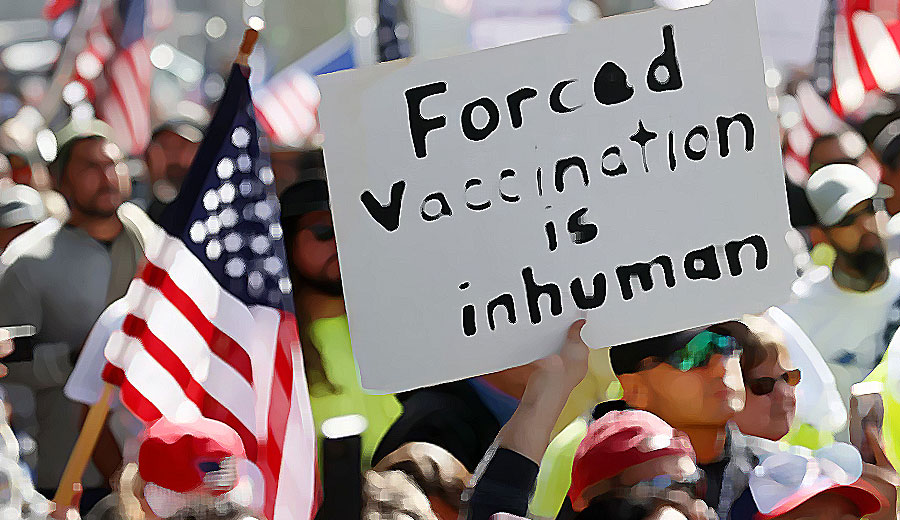 More relevant now than ever!

I am not vaccinated. In a sane society, a personal decision like this would not warrant a column, or even an explanation. But we do not live in a sane society. As a healthy 36-year-old woman, COVID-19 does not pose a statistically meaningful threat to my life. I have a 99.97 percent chance of survival. Why would I get a vaccine for a virus that I do not fear and that isn’t a threat to my life—particularly when there is an element of risk from the vaccines?

Despite this completely rational and data-driven viewpoint, the Biden White House recently broke its previous promise and issued federal mandates that will be applied to about 100 million Americans—two-thirds of all workers. For companies with 100 workers or more, employees must be vaccinated for COVID-19 or subjected to weekly testing starting on January 4, 2022. Health care workers at facilities that receive federal funding are also required to get the vaccine. The Pentagon has issued a vaccine mandate for service members, as well.

In September, when the mandates were first announced, Biden said the guiding principle was to “protect vaccinated workers from unvaccinated co-workers” and “reduce the spread of COVID-19 by increasing the share of the workforce that is vaccinated in businesses all across America.” But the vaccines clearly haven’t accomplished that goal to-date, so what exactly is the point of mandating vaccines that have thus far failed to stop the spread? Furthermore, what is the point of only testing the unvaccinated, when it is now clear that the vaccinated are also still spreading COVID? And why is natural immunity being completely ignored and denied any relevance whatsoever when over 100 research studies have affirmed its effectiveness? That seems at least a little strange.

HBO’s Bill Maher recently railed against the COVID-related hysteria that has taken over the nation. Maher pointed to a Gallup poll that found 41 percent of Democrats believed the unvaccinated have an over-50 percent risk of hospitalization, but, per Gallup, it’s actually “0.89 percent.” This then raises the obvious question: Is the Biden administration governing by paranoia or based on the actual underlying facts?

During a July CNN town hall, Biden told the American people, “you’re not going to get COVID if you have these vaccinations.” This declaration came after a group of fully vaccinated Texas Democratic state legislators turned a visit to Washington, D.C. into a super-spreader event. Shortly after, CDC Director Dr. Rochelle Walensky admitted, “unlike with other variants, vaccinated people infected with Delta can transmit the virus.” In August, Walensky told CNN that the vaccines “continue to work well with Delta with regard to severe illness and death, but what they can’t do anymore is prevent transmission.”

Her comments were in response to a study that examined an outbreak that began on July 3 in Provincetown, Massachusetts, involving 469 cases. Seventy-five percent of the cases in that outbreak occurred in fully vaccinated people, and there was no significant difference found in viral loads between the vaccinated and unvaccinated. A recent study published in The Lancet Infectious Diseases journal came to a similar conclusion, finding that vaccinated people are just as likely to spread the Delta variant as unvaccinated people within their households.

British Prime Minister Boris Johnson actually pointed this out himself when he recently said the vaccine “doesn’t protect you against catching the disease and it doesn’t protect you against passing it on.” Anecdotally, Americans have also witnessed an ever-growing list of high-profile fully vaccinated people who have contracted COVID—White House Press Secretary Jen Psaki being one of them. In the Senate alone, fully vaccinated Senators Lindsey Graham, John Hickenlooper, Angus King and Roger Wicker all have contracted COVID. Celebrities like Chris Rock and Khloe Kardashian have also gotten breakthrough cases.

NEW: A new peer-reviewed study suggests the natural immunity of an unvaccinated person offers more robust protection against re-infection than those who received the vaccine before being infected. https://t.co/N0R3AjGxqA

To its mild credit, Big Pharma warned us in advance. Pfizer’s chairman told Lester Holt of “Dateline” last December that he wasn’t sure if the vaccine would stop transmission. Moderna’s chief medical officer told Axios last November, “I think we need to be careful, as we get vaccinated, not to over-interpret the results.” He went on to say, “When we start the deployment of this vaccine, we will not have sufficient concrete data to prove that this vaccine reduces transmission.” It’s unclear why some now seem so surprised that the vaccines haven’t stopped the spread.

What’s more, is it possible that our myopic approach is outright counterproductive? Dr. Robert Redfield, former CDC director and now a senior advisor to Maryland Governor Larry Hogan, said that 40 percent of the recent COVID deaths in the state of Marylandwere among the fully vaccinated. It’s tough to know exactly what to make of that, but it surely isn’t encouraging, at minimum.

The vaccine helps protect the vaccinated from dying, but it does not protect the vaccinated from either getting or spreading COVID. In other words, it seems clear to many of us that the vaccine is a personal health benefit, not a public health benefit. Therefore, whether to get vaccinated is a profoundly personal decision, not a publichealth decision. And not everyone is high-risk. There is a more than a thousand-fold difference in the risk of mortality between the old and young. The decision I am making as a healthy 36-year-old is different than the one Joe Biden should make as a 78-year-old. And low-risk Millennials like me comprise the largest generation in the broader U.S. labor force.

At a time when America faces a worker shortage and a supply-chain crisis, why would we sideline more workers? Vaccine mandates in cities like New York have already shut down 26 firehouses due to staff shortages. One hospital in upstate New York had to stop delivering babies due to too many maternity workers resigning over the mandate. Many firefighters, police officers, nurses and military men and women also have natural immunity because they had to work during the height of the pandemic; why exactly are we now punishing them again?

Vaccine mandates do not make sense. But most importantly, they are immoral. The government does not own us. I reject mandates because I believe in freedom. I am praying the rest of the country wakes up from this psychosis that has taken over. Is it too much to ask for a little common sense and bodily autonomy?

Lisa Boothe, a national television commentator, is host of the podcast, “The Truth with Lisa Boothe.”

The views expressed in this article are the writer’s own.