Uninformed Consent:Documentary: An In-Depth Look Into the Covid 19 Narrative 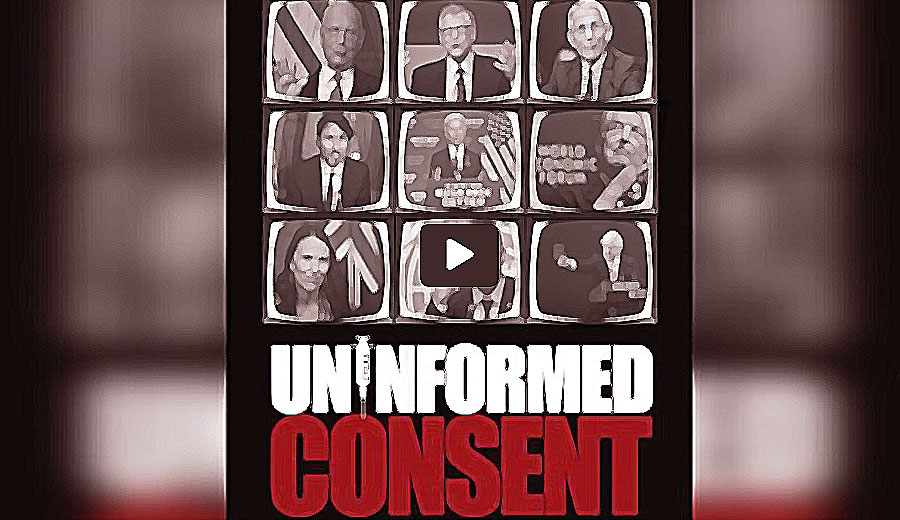 The documentary above, “Uninformed Consent,” takes a deep dive into the COVID-19 narrative — who’s controlling it and how fear was (and continues to be) used to push novel, unproven gene transfer technology onto, and into, people of all ages, and the simultaneous theft of private wealth and the destruction of small businesses, across the globe.

The film is written and directed by Todd Michael Harris (Matador Films). Odessa Orlewicz, a pro-freedom activist in British Columbia and founder of the Canadian social media platform Librti, and Ted Kuntz, retired psychotherapist and president of Vaccine Choice Canada, co-produced the film.

Weaving in and out of the heart-wrenching story of one man’s loss, interviews with doctors and scientists explores the loss of human rights in the name of biosecurity, and how the “elite class” profit from it all.

Interspersed are compilations of media lies and the bewilderingly contradictory dictates of government officials, as well as footage from protests and examples of people collapsing on live television after getting the jab.

The COVID jabs are a crime against humanity, and it’s a crime in progress. For many who are aware of what’s going on, everyday reality is like watching an intentional, slow-motion train wreck.

As noted by B.C. physician Dr. Stephen Malthouse, who is interviewed in the film, “divide and conquer” is an age-old war strategy. During Hitler’s reign, anti-Semitism was normalized through propaganda in which Jews were likened to “lice,” and were accused of carrying typhus. The same exact strategy was used during the COVID pandemic.

Those who dutifully wore their face masks and got the jab were hailed as good and moral citizens, while the rest were labeled as murderous, disease-carrying, amoral egotists, who’d by their selfishness forfeited their right to life.

Irrational hatred against anti-maskers, “anti-lockdowners” and “anti-vaxxers” was relentlessly fueled and “normalized” by government officials, health authorities and media, right from the start.

Those who dutifully wore their face masks and got the jab were hailed as good and moral citizens, while the rest were labeled as murderous, disease-carrying, amoral egotists, who’d by their selfishness forfeited their right to life.

Family members were pitted against family members. Friends against friends. Coworkers against coworkers. Employers against employees. Most of us who opted out of this grand genetic experiment have been shunned and berated by people we love.

Adding insult to injury, we all paid for this abuse. Billions of taxpayer dollars were spent on propaganda, anti-vax harassment and pro-vax advertising. The pain of this intentional divide and conquer strategy was too great to bear for many.

The personal story that Harris returns to again and again throughout the film is that of a grieving husband whose wife committed suicide. She suffered relentless bullying and harassment from coworkers and superiors for refusing the jab, and when she was finally placed on unpaid leave, she took her own life.

How many suicides are the pandemic puppet masters and their brainwashed minions responsible for? Nobody knows, but it’s likely quite a few. And make no mistake: The hateful rhetoric fed into everyone’s brains and acted out by the weak-minded was intended to cause harm.

It was intended to cause distress, and many now carry the cross of having bullied someone to death, whether they’re aware of it or not. Sadly, many have not yet learned their lesson, and efforts to demonize certain groups continues. Now, the targeted opposition are those who ask questions that Big Pharma and government refuse to answer, or point out blatant contradictions in the narrative.

Terms like “conspiracy theorist” and “conspiracy theory” are applied to everything and everyone who questions the official and clearly ridiculous narrative. And, the demonization continues even as so-called “conspiracies” are repeatedly shown to be true.

For example, the suspicion that we’d be forced to take these gene therapy shots multiple times a year, for years on end, was labeled a “conspiracy theory,” yet it didn’t take long before boosters were rolled out, and now they’re coming out with shots for newer variants as well, which will result in another round of shots.

Similarly, “conspiracy theorists” warned that people who got the jab would have to continue getting boosters or lose their precious “fully vaccinated” status, and that’s exactly what happened.

In fact, the concept of vaccine passports being used to shut people out of everyday society was initially dismissed as a paranoid conspiracy theory, yet it didn’t take long before governments were doing exactly that.

“Conspiracy theorists” also warned that the COVID jab didn’t prevent infection or spread, and that too is now an indisputable fact. As of early February 2022, Israel reported that 80% of serious COVID cases were among the fully vaccinated.

“Conspiracy theorists” warned that giving the experimental shot to teens and young children would be unconscionably dangerous, as they have a negligible risk for COVID complications, and now even mainstream media from time to time admit that teens and young adults are suffering above normal rates of heart inflammation.

Between January 2021 and August 2022 (a period of 19 months), at least 1,249 athletes have suffered cardiac arrest or collapse, and 847 have died after COVID injection, worldwide. Historically, the annual average of sudden death in athletes was between 29 and 69.

“Uninformed Consent” scrutinizes many of the elements of the pandemic response, such as the irrational idea that early treatment for COVID-19 is nonexistent and/or futile, and the equally irrational idea that the only solution is to inject everyone on the planet with an experimental product, without regard for individual levels of risk.

He also looks at the lawless culture of the drug industry and its capture of regulatory agencies and media — a development that has effectively eliminated any protection the public would have had, and should have, from predatory behavior and dangerous products. Harris also reviews:

I hope you’ll take the time to watch “Uninformed Consent,” and share it with others. Harris specifically tried, he says, to create a film that would help open the eyes and minds of those who still cannot see what’s happening, or don’t fully believe what they’re seeing.

Resources for Those Injured by the COVID Jabs

To close things out with something that is not covered in this film, if you for whatever reason got one or more jabs and suffered an injury, know there are good doctors and scientists working on solutions.

First and foremost, never ever take another COVID booster, another mRNA gene therapy shot or regular vaccine. You need to end the assault on your system. The same goes for anyone who has taken one or more COVID jabs and had the good fortune of not experiencing debilitating side effects.

Your health may still be impacted long-term, so don’t take any more shots. When it comes to treatment, there still aren’t many doctors who know what to do, although I suspect we’ll see more doctors specializing in COVID jab injuries in the future.

Doctors who have started tackling the treatment of COVID jab injuries in earnest include Dr. Michelle Perro (DrMichellePerro.com), whom I’ve interviewed on this topic. Perro is a pediatrician who over the past couple of years has also started treating adults injured by the jab. Another is Dr. Pierre Kory (DrPierreKory.com).

Both agree that eliminating the spike protein your body is now continuously producing is a primary task. Perro’s preferred remedy for this is hydroxychloroquine, while Kory typically uses ivermectin. Both of these drugs bind and thereby facilitate the removal of spike protein.

Kory also believes there may be ways to boost the immune system to allow it to degrade and eventually remove the spike from your cells naturally, over time. One of the strategies he recommends for this is TRE (time restricted eating), which stimulates autophagy, a natural cleaning process that eliminates damaged, misfolded and toxic proteins. Another strategy that can do the same thing would be sauna therapy.

As a member of the Front Line COVID-19 Critical Care Alliance (FLCCC), Kory helped develop the FLCCC’s post-vaccine treatment protocol called I-RECOVER. Since the protocol is continuously updated as more data becomes available, your best bet is to download the latest version straight from the FLCCC website at covid19criticalcare.com (hyperlink to the correct page provided above).