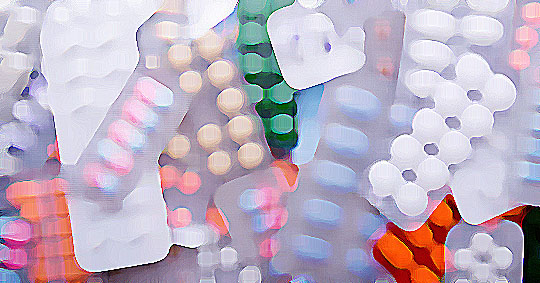 VIDEO: Opens @ 55 seconds in (sorry for the delay) with a montage of reports on Drug companies’/Big Pharma criminal lawsuits and settlements
via: Ryan Cristián/TheLastAmericanVagabond

@26:00 Ryan breaks down the Peer-Reviewed Studies

See the Violation Tracker at the end of the post

Have millions been taking antidepressants with harmful side-effects for decades – when there’s no scientific evidence they do what they claim? Some experts have suspected it for years. Now patients have been left reeling by a groundbreaking study
source: DailyMail

“This myth was created more than 35 years ago by pharmaceutical companies to justify their products, and has been perpetuated ever since by the training and practice of doctors around the world.”

Cool, now do vaccines and all the other Big Pharma poisons https://t.co/kiS0ag6zu8

Like millions of patients who seek help from their GPs for depression, Emma Ward was repeatedly told she was suffering from ‘an imbalance of chemicals in the brain’.

If Emma wanted to get better, her doctors said the 26-year-old should keep taking the antidepressants she had been prescribed since she was 15 — even though the drugs did not seem to improve her mood, and left her feeling perpetually numb emotionally.

Now, shocking new research published yesterday shows that the theory justifying the millions of prescriptions for antidepressants handed out every month to patients such as Emma, is simply not true.

The research confirms what some medical professionals have increasingly come to suspect. That the ‘chemical imbalance’ theory — that depression is due to a lack of the brain chemical serotonin — is nothing more than a myth.

This myth was created more than 35 years ago by pharmaceutical companies to justify their products, and has been perpetuated ever since by the training and practice of doctors around the world. In the most comprehensive review of the research on links between depression and serotonin ever carried out, researchers from the UK, Italy and Switzerland looked at 17 major international reviews that had documented the findings from more than 260 studies, involving 300,000 patients.

Their findings, published in the journal Molecular Psychiatry, undermine the basis for decades of prescribing of the most commonly used antidepressants, Selective Serotonin Reuptake Inhibitors, or SSRIs.

‘For years, people have been led to believe that depression is caused by a chemical imbalance in the brain, due to a deficiency of the chemical serotonin,’ the lead researcher, Professor Joanna Moncrieff, a professor of psychiatry at University College London and a consultant psychiatrist at North East London NHS Foundation Trust, told the Mail.

‘We can safely say that after a vast amount of research conducted over several decades, there is no convincing evidence that depression is caused by serotonin abnormalities.’
…….

Fluoxetine was developed by U.S. pharmaceutical giant Eli Lilly in the early 1970s, based on ‘the hypothesis’ that boosting serotonin would help treat depression, and it soon became apparent that the company had struck gold.

According to a 2005 paper, by two of Fluoxetine’s inventors, ‘revenue from antidepressant sales was valued at less than $200 million in the first eight months of 1975’.

Prozac was approved for the treatment of depression in the U.S. in 1987, and by 2002 it had been prescribed to more than 40 million patients worldwide, with total sales of $22 billion.
…….

‘Part of the reason why the story of chemical imbalances in depression has become so prevalent is because it was propagated by drug companies when they were marketing new antidepressants,’ says Dr Mark Horowitz, a co-author of the new study.

‘Antidepressants have been blockbuster drugs for the pharmaceutical industry, frequently ranking among their most profitable.’

…..‘However, now we have and it confirms that there is no convincing evidence that serotonin is linked with depression, and certainly not that low serotonin is a cause of depression.

Certainly, according to the new review, antidepressants ‘work’ mainly because people believe they do.
…….
…‘Other explanations for the effects of antidepressants have been put forward, including the idea they work via an amplified placebo effect.’

Even if antidepressants do have a placebo effect, they are active drugs that can have unpleasant side-effects, including loss of libido and emotional numbness. Some people can also struggle to come off them because of severe withdrawal symptoms.
…….

Lead researcher behind the new review, Dr Horowitz, a training psychiatrist and clinical research fellow in psychiatry at University College London, said that during his training he, too, was taught depression was caused by low serotonin — ‘I even taught this to students in my own lectures’.

Now, he says, ‘it feels like everything I thought I knew has been flipped upside down’.

Professor Moncrieff says: ‘We do not understand what antidepressants are doing to the brain, and giving people misinformation prevents them from making an informed decision about whether to take them or not.’
…….

No evidence that depression is caused by low serotonin levels, finds comprehensive review

After decades of study, there remains no clear evidence that serotonin levels or serotonin activity are responsible for depression, according to a major review of prior research led by UCL scientists.

“Many people take antidepressants because they have been led to believe their depression has a biochemical cause, but this new research suggests this belief is not grounded in evidence.”

These findings together led the authors to conclude that there is “no support for the hypothesis that depression is caused by lowered serotonin activity or concentrations.”

The researchers say their findings are important as studies show that as many as 85-90% of the public believes that depression is caused by low serotonin or a chemical imbalance.

The serotonin theory of depression: a systematic umbrella review of the evidence

Depression is not caused by a ‘chemical imbalance’ in the brain, say scientists

by: Nina Massey via MetroUK

There is no clear evidence that depression is caused by low serotonin levels, research suggests.

The new review, which analysed existing studies, suggests the condition is not likely caused by a chemical imbalance, and calls into question what antidepressants do.

Researchers say their findings are important as studies show that as many as 85-90% of the public believes that depression is caused by low serotonin or a chemical imbalance.

Most antidepressants are selective serotonin reuptake inhibitors (SSRIs), and were originally said to work by correcting abnormally low serotonin levels.

There is no other accepted way by which antidepressants affect the symptoms of depression.

She said: ‘It is always difficult to prove a negative, but I think we can safely say that after a vast amount of research conducted over several decades, there is no convincing evidence that depression is caused by serotonin abnormalities, particularly by lower levels or reduced activity of serotonin.

‘The popularity of the “chemical imbalance” theory of depression has coincided with a huge increase in the use of antidepressants.

‘Prescriptions for antidepressants have risen dramatically since the 1990s, with one in six adults in England and 2% of teenagers now being prescribed an antidepressant in a given year.’

‘The popularity of the “chemical imbalance” theory of depression has coincided with a huge increase in the use of antidepressants’.

‘Many people take antidepressants because they have been led to believe their depression has a biochemical cause, but this new research suggests this belief is not grounded in evidence.’

Professor Moncrieff added: ‘Thousands of people suffer from side effects of antidepressants, including the severe withdrawal effects that can occur when people try to stop them, yet prescription rates continue to rise.

‘We believe this situation has been driven partly by the false belief that depression is due to a chemical imbalance.

‘It is high time to inform the public that this belief is not grounded in science.’

The umbrella review looked at all relevant studies that have been published in the most important fields of research on serotonin and depression.

In total, these involved tens of thousands of participants.

One of the findings was that research that compared levels of serotonin and its breakdown products in the blood or brain fluids did not find a difference between people diagnosed with depression and healthy people.

The authors also looked at studies where serotonin levels were artificially lowered in hundreds of people.

These studies have been cited as demonstrating that a serotonin deficiency is linked to depression.

But a review of the research available in 2007 and a sample of recent studies found that lowering serotonin in this way did not produce depression in hundreds of healthy volunteers.

One early study found a relationship between stressful events, the type of serotonin transporter gene a person had and the chance of depression.

However, larger, more comprehensive studies suggest this was a false finding.

These findings led the authors to conclude that there is ‘no support for the hypothesis that depression is caused by lowered serotonin activity or concentrations’.

Some evidence suggests that believing low mood is caused by a chemical imbalance leads people to have a pessimistic outlook on the likelihood of recovery, and the possibility of managing moods without medical help.

According to the research, there is also evidence from other studies that people who used antidepressants had lower levels of serotonin in their blood.

The scientists say this indicates that some evidence was consistent with the possibility that long-term antidepressant use reduces serotonin concentrations.

This may imply that the increase in serotonin that some antidepressants produce in the short term could lead to compensatory changes in the brain that produce the opposite effect in the long term.

Professor Moncrieff said: ‘We do not understand what antidepressants are doing to the brain exactly, and giving people this sort of misinformation prevents them from making an informed decision about whether to take antidepressants or not.’

The researchers caution that anyone considering withdrawing from antidepressants should seek the advice of a health professional.

The findings are published in Molecular Psychiatry.

A spokesman for the Royal College of Psychiatrists said: ‘Antidepressants will vary in effectiveness for different people, and the reasons for this are complex, which is why it’s important that patient care is based on each individual’s needs and reviewed regularly.

‘Continued research into treatments for depression is important to help us better understand how medications work as well as their effectiveness.

‘Medication should be available for anyone who needs it. We would not recommend for anyone to stop taking their antidepressants based on this review, and encourage anyone with concerns about their medication to contact their GP.’

Notes: Parent-subsidiary linkages are based on relationships current as of the latest revision listed in the Update Log, which may vary from what was the case when a violation occurred. The penalty totals are adjusted to account for the fact that the individual entries below may include both agency records and settlement announcements for the same case; or else a penalty covering multiple locations may be listed in the individual records for each of the facilities. The totals are also adjusted to reflect cases in which federal and state or local agencies cooperated and issued separate announcements of the outcome. Duplicate or overlapping penalty amounts are marked with an asterisk in the list below.

Links: Subsidy Tracker data on financial assistance to this company by federal, state and local government agencies can be found here.

For an overview of assistance this company is receiving under the CARES Act, see its Covid Stimulus Watch summary page here.

Click on the company or penalty amount for more information on each case.

Download results as CSV or XML or Save your search (Click here for information on download subscriptions)
(*): Penalty amounts marked by an asterisk are ones announced by more than one agency. Parent penalty totals are adjusted to avoid double-counting.