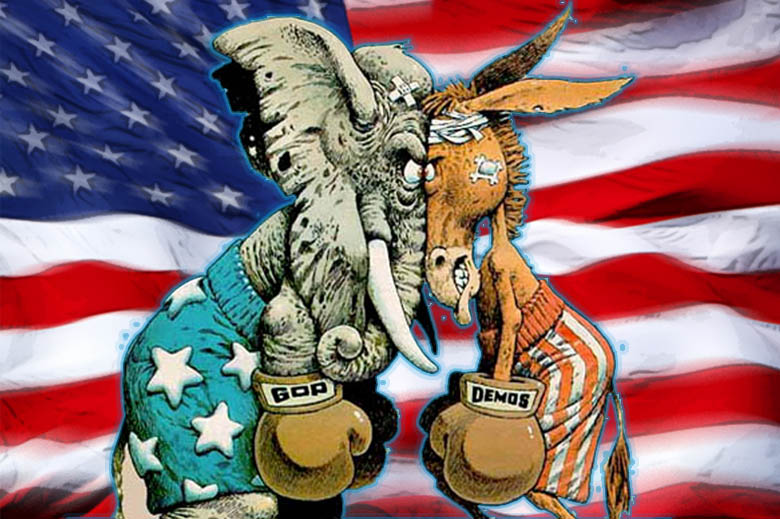 Just in case this concept happens to be new to you, I will try to take small steps to soften the blow and make it as easy as possible to digest. Plain and simple – there is no real difference between the two major political parties. There are indeed other choices which the mainstream media (MSM) usually ignores but for the sake of keeping this introductory 101 course simple and easy lets just stick with the Left and Right sides of the aisle, our one-and-only Republicans and Democrats, or as I like to refer to them, the Republicrats.

The MSM is a crucial tool in promoting this narrative. Just like in our ubiquitous sporting rivalries, everyone is convinced that they must either be for the Red Team or for the Blue Team. One can put aside independent critical thinking on any issue and simply put on either their red jersey or their blue jersey, get in the proper pen and wave their red or blue flag.

The two “opposing” sides of our political theatre group love to argue back and forth especially on issues that most likely pit groups of people against each other. Hot-buttton topics such as gay marriage or abortion are always good issues to keep the people divided. On other issues such as the NDAA, both sides of the aisle seem to be able to easily come to terms as they did on- I believe it was New Year’s eve 2011 when the masses were not paying attention, Congress nearly unanimously passed the bill into law. Coincidentally, it was that same season of the year in December 1913 when they slipped through the Federal Reserve Act. (much more on this to come)

The National Defense Authorization Act authorizes for the indefinite military detention of civilians, including U.S. citizens, suspending the rights of Habeas Corpus, should they be deemed an “enemy combatant” or “enemy of the state”. This vague label could potentially be placed on anyone who may stand up and oppose a particular policy. (This as well will be covered in subsequent posts when we explore the deterioration of our rights and freedoms-but for now, let’s stay on point.) This becomes more chilling as we find out that the current administration was using the IRS to target its opposition, namely conservative Tea Party groups and the like.

Back to the Republicrats!

One must be most cautious to not take any politician on his word but rather judge him by his actions and/or more importantly, if applicable, his voting record.

One such example would be the “fiscal conservative” 2012 vice presidential candidate, Paul Ryan. As the financial crisis took its toll on America, people started to stand up to be heard. One grass-roots movement that gathered steam was the conservative “Tea-Party” movement.  It turns out the movement was more or less co-opted by the GOP who used it to gain momentum against the “spendthrift liberals”. Ryan emerged a leader in the fight of fiscal conservatives intent on slashing irresponsible, out-of-control government spending.

Again, it is more important to judge them by their actions rather than by their words.

Now at this time, we find ourselves nearing the next chapter in the debt-ceiling debates. As we draw closer to this event, let’s prepare ourselves to hear the arguments that without more government spending the economy will not move forward. We can rest assured that our president will be urging Congress to spend more and more money to stimulate growth. He’ll argue that we need to spend more to create jobs, to build infrastructure, to educate everyone equally, blah, blah blah…………… All with money we don’t have and will need to borrow.

Let’s take a moment to remember back to 2006 when at that time freshman senator from Illinois, Senator Barack Obama made the following remarks arguing against the other team’s wishes to at that time raise the debt limit:

“The fact that we are here today to debate raising America’s debt limit is a sign of leadership failure. It is a sign that the U.S. Government can’t pay its own bills. It is a sign that we now depend on ongoing financial assistance from foreign countries to finance our Government’s reckless fiscal policies.”

“Over the past 5 years, our federal debt has increased by $3.5 trillion to $8.6 trillion.That is “trillion” with a “T.” That is money that we have borrowed from the Social Security trust fund, borrowed from China and Japan, borrowed from American taxpayers. And over the next 5 years, between now and 2011, the President’s budget will increase the debt by almost another $3.5 trillion.”

“Numbers that large are sometimes hard to understand. Some people may wonder why they matter. Here is why: This year, the Federal Government will spend $220 billion on interest. That is more money to pay interest on our national debt than we’ll spend on Medicaid and the State Children’s Health Insurance Program. That is more money to pay interest on our debt this year than we will spend on education, homeland security, transportation, and veterans benefits combined. It is more money in one year than we are likely to spend to rebuild the devastated gulf coast in a way that honors the best of America.”

“Every dollar we pay in interest is a dollar that is not going to investment in America’s priorities. Instead, interest payments are a significant tax on all Americans- a debt tax that Washington doesn’t want to tall about. If Washington was serious about honest tax relief in this country, we would see an effort to reduce our national debt by returning to responsible fiscal policies.”

Now, going into the sixth year of his administration he will be urging Congress to again raise the debt ceiling so we can blast right through 17 trillion.

We’ll leave that to steep for a while. Stay tuned for Episode 02.