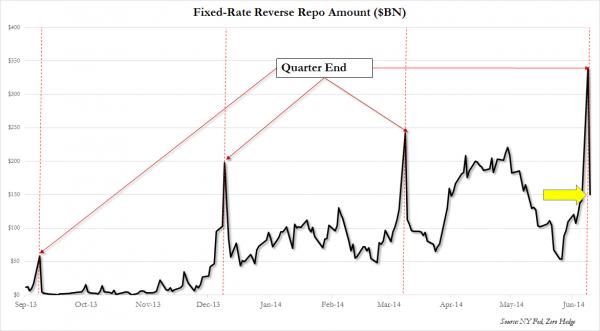 When we reported yesterday’s record reverse-repo surge, driven entirely by collateral-strapped financial entities scrambling to “window dress” their balance sheets with rented Fed-owned Treasurys for regulatory purposes, we said “Expect total reverse repo usage tomorrow to plunge by at least $150 billion as the banks will have fooled their regulator, which also happens to be the Fed, that they are safe and sound.

Rinse, repeat, until the entire financial system collapses once again and people will ask “how anyone could have possibly foreseen this.” Moments ago the Fed reported the daily reverse repo use. It turns out we were optimistic: it wasn’t $150 billion, it was $189 billion.

Following yesterday’s $339 billion allottment, today this number tumbled to just $151 billion, meaing nearly $200 billion in fungible cash had to quick find a new home away from the Fed.

Which, incidentally explains where the relentless buying in today’s market is coming from: today the Fed just released liquidity for two months worth of POMO in one day – money which promptly had to find a parking spot until the next quarter end when the same window dressing exercise is repeated and which will continue to go on completely unnoticed by regulators.

In other words, they’re spending as though they were reasonable people who have realized how the system works. The Fed creates a world where its friends and cronies can borrow at below the rate of consumer price inflation. The 1% gets richer. The other 99% struggles to keep up with the bills.

As we have been warning, consumer prices are rising faster than the Fed admits. That leaves the typical household with less money to spend than the numbers suggest. We see the effect of it on consumer spending. The Fed pinched off savings, investment and employment. Now, it gets what you’d expect: low GDP!

Six years of “stimulating” the economy by giving it more of what it least needed has produced no real recovery… just more debt. It has also produced a corrupt money system in which almost every race is fixed. The 1% wins every time. The consumer is barely able to limp around the track.

It would appear that the exuberance over today’s better-than-expected car sales data should be tempered significantly.

Across the industry, auto lenders are pursuing growth by lengthening terms, increasing advance rates, and originating loans to borrowers with lower credit scores.

With average loan-to-value rates above 100%, they have an ominous warning: “risk in auto-lending is beginning to emerge.” We are sure this will be dismissed (just as the BIS’ warning has been), but with surging charge-offs and increased repackaging (CLOs), and banks holding a lot of this debt, this ‘bubble-financing’ has all the ingredients for subprime 2.0 contagion.

In American society, ‘debt’ and ‘income’ have become increasingly synonymous over the past 3 decades; but as Rick Santelli blasts (commonsensically), “they certainly shouldn’t be.” It appears the average joe has been led to this conclusion by the Central Banks.

Rhetorically asking “where’s the horsepower in the economy coming from?” Rick reflects on the auto-loan fears we discussed earlier, santelli notes that 55% of used cars (and 30% of new cars) are financed by subprime lenders… and rages, “if we continue as a country to fuel our consumerism with debt, there is no way the bond market’s going to be wrong.”

“Until we start to get the income equation moving, the central banks can’t do enough. ultimately, end game, can’t fuel an economy on debt.” (see source for CNBC video)

“When somebody has too much debt and cannot reimburse it, how do you bail him out? Obviously by restructuring his debts, which imply losses for his creditors.

But when one lends him more money in order for him to pay back what he owes, he is not bailing him out but rather pushing him in a bigger hole!

The game until now has been to “print” more money and to add more debt on the shoulders on the indebted ones, to gain some time in the hope that growth will resume and reduce de facto the weight of the existing debt burden and the additional new debt issued to support the initial debt troubles.

This is a big misunderstanding of debt dynamics and its effects on the economy. When debt becomes too big, which it is now the case in many parts of Europe, the servicing drains all the available cash flows and reduces the growth potential.”