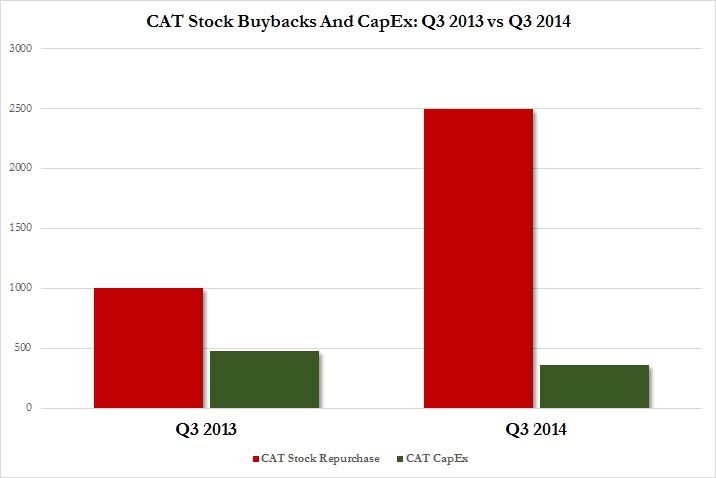 As highlighted in an earlier post: Caterpillar: Microcosm of the un-Recovery Caterpillar can once again give a snapshot of the overall state of economic affairs.

And they’re not alone. With the “free” money flowing from the Fed, it’s a no-brainer. Sadly it doesn’t help the real economy.

This Is How Caterpillar Just Blew Away Q3 Earnings

Those who have been following Caterpillar actual top-line performance know that things for the industrial bellwether have been going from bad to worse, with not only retail sales declining across the globe, as documented here previously, but with the current stretch of declining global retail sales now longer than during what was seen during the Great Recession.

And yet, moments ago(10/23/14), CAT, which is a major DJIA component, just reported blowaway EPS of $1.72, far above the $1.35 expected. How did it achieve this stunning number which has pushed DJIA futures higher by almost half a percent?

Simple: first there was the usual exclusions, with “restructuring costs” adding back some $0.09 to the bottom line number.

But the punchline was this: “In addition to the profit improvement, we have a strong balance sheet and through the first nine months of the year, we’ve had good cash flow.  So far this year,we’ve returned value to our stockholders by repurchasing $4.2 billion of Caterpillar stock and raising our quarterly dividend by 17 percent,” Oberhelman said.”

One can only assume the collapse in CapEx spending is because the company is so enthused about its global growth prospects.

But wait, there’s more, because another reason why the stock is soaring is because CAT actually boosted EPS guidance despite the ongoing retail sales collapse. To be sure, CAT did not boost revenue guidance, and “The company now expects 2014 sales and revenues to be about $55 billion, the middle of the previous outlook range of $54 to $56 billion.”

Actually no. The improvement is the result of a surge in current and upcoming buybacks.

Recall: “As previously announced, the company repurchased $2.5 billion of Caterpillar common stock during the third quarter of 2014.  This repurchase is part of the $10 billion stock repurchase authorization approved by the Board of Directors in the first quarter of 2014.”

In other words, expect about $2.5 billion of stock buybacks per quarter, reducing the company’s outstanding share count, and thus boosting its Earnings Per Share number.

What else did CAT say:

Despite cautious optimism for improved global economic growth, significant risks and uncertainties remain that could temper growth in 2015.  Political conflicts and social unrest continue to disrupt economic activity in several regions, in particular, the Commonwealth of Independent States, Africa and the Middle East.  The Chinese government’s push for structural reform is slowing growth, and the ongoing uncertainty around the direction and timing of U.S. fiscal and monetary policy actions may temper business confidence.  As a result, our preliminary outlook for 2015 expects sales and revenues to be flat to slightly up from 2014.

“At this point, our view of 2015 sales and revenues isn’t significantly different than 2014.  Our order backlog was up a little in the third quarter and was slightly higher than at this point last year.  We‘re hopeful that economic growth will improve in 2015, but are mindful of the uncertainties and risks.  We have continued to improve operational execution, and if we see more positive economic momentum, we believe we’re well-positioned to respond and deliver for our customers and stockholders,” Oberhelman added.

So much more buybacks. Because in the new normal, if you can’t grow, you just buy your way to growth. On margin.