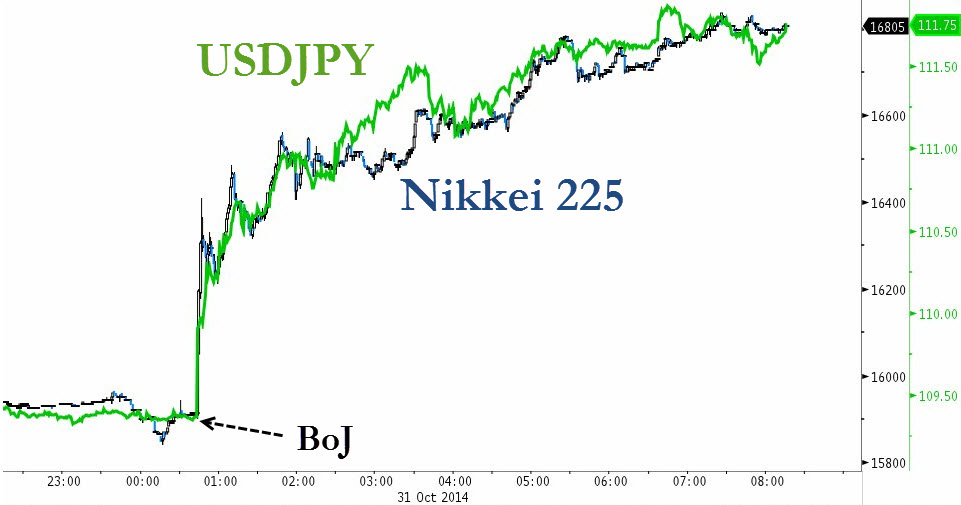 You know the world’s financial markets have become farce when the broad Nikkei 225 stock market of Japan rises 1000 points in 7 hours… The meme that stock ‘markets’ move on fundamentals not central bank liquidity is officially dead. Let that sink in for a moment…

In a surprise move given all the recent congratulatory bullshit from Abe and Kuroda on breaking the back of Japan’s deflation and bring about recovery (forgetting to mention record high misery index, surging bankruptcies and a crushed consumer), the Bank of Japan (by a 5-4 vote) raised its bond-buying program from JPY 70 trillion to 80 trillion… and triple its ETF buying to JPY 3 trillion….

Welcome to your fundamental-driven markets!! The farce is almost complete. The day after The Fed stops QE, The BoJ raises its bond AND STOCK buying program!!!!

Two days ago, when QE ended and knowing that the market is vastly overstimating the likelihood of a full-blown ECB public debt QE, we tweeted the following:

It’s all up to the BOJ now

Little did we know how right we would be just 48 hours later.

Because as previously reported, the reason why this morning futures are about to surpass record highs is because while the rest of the world was sleeping, the BOJ stunned those few who were looking at Bloomberg screens with a decision to boost QE, announcing it would monetize JPY80 trillion in JGBs, up from the JPY60-70 trillion currently and expand the universe of eligible for monetization securities. A decision which will forever be known in FX folklore as the great Halloween Yen massacre.

…So for all those wondering why futures are back to all time highs, here is the reason:

No wait, sorry, that’s reality – something that hasn’t mattered to markets since 2008. Here is the reason, all thanks to CTRL-P:

In other words, several days after Larry Fink mysteriously visited Abe, the BOJ announced it would do everything in its power push the Nikkei into green for the year, which it did with its announcement overnight, and to truly crush the local population’s buying power.

Some of the best insight comes from the man on the street comments:

“Step back for a moment and realize we are watching Japan knowingly print it’s currency to oblivion (to be followed by the rest of us).  Not in some moldy old textbook, not in some 3rd world nation run by tribal warlords, but right in front of our eyes in real-time.

I just didn’t think there would be so much cheering.”

“We all knew this was coming prior to the elections. I am beginning to hear “it ain’t real” from the 401k crowd. I am curious if there is some “blowback” coming from this on Tuesday; is this a positive for Republicans? Gas has crunched and stawks have to the point that we may see havoc DEC 5TH?”

We are in the final throes of the economic desparation before the convulsions begin. Fascinating.

Any ideas on what happens next? I mean, who else is going to crank out more funny money?”

“It’s just the start of the currency wars/race to the bottom. Japan is first because they have to be first. Then it will be others and finally the US dollar that goes full retard and ends this silly debt based house of cards.

Then the real hell will be unleashed.”

“it’s no coincidence that the same country who fought WW2 with kamakaze tactics is the 1st to do so with its economy. these are the final throws of the currency war, CBs are losing, and it’s going to end with a bang.”

“Whatever nations relying on exports as relatively high % of GDP relative to overall GDP are going to necessarily have to debauch & debase their currencies, and to anally rape their domestic citizenry, at this point, in order to avoid suffering massive economic contraction (it’s as certain as a rule in mathematics).

Japan just officially set off the race to debase currency wars among export-dependent nations in a huge way.”

……and think where else this applies?  It’s not only Japan.

Japan continues to slide towards an economic abyss with each passing day. The writing is on the wall. Japan is facing a wall of debt that can only be addressed by printing more money and debasing their currency. This means paying off their debt with worthless yen where possible and in many cases defaulting on promises made. Japan’s public debt, which stands at around 230% of its GDP and is the highest in the industrialized world.

The moment the Japaneses stock market fails to rise enough to offset inflation this will turn into a tsunami of  money fleeing Japan and constitute the end of the line for those left holding both JGBs and the yen. This has been a long time coming and I contend the cross-border flow of money leaving Japan is why some stock markets have remained so resilient . When Japan crumbles it will be felt across the world. More on this subject in the article below.