What Will Change If/When Republicans Take The Senate? …. the short answer is “nothing” 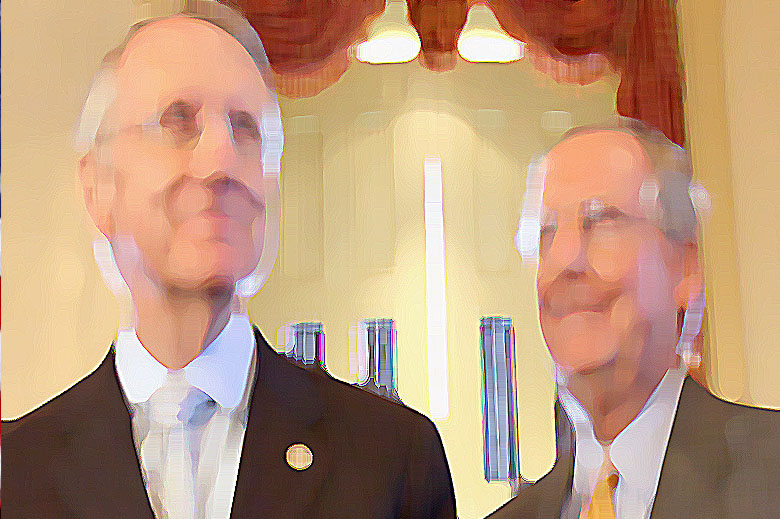 The short answer, of course, is “nothing” – Congress, or the presidency, have been irrelevant ever since the Fed fully took over the US some time in late 2008. Since then, it has been the role of the central printer of the US, working on behalf of the US banking syndicate, to “get to work”, and cover up the fact that Congress, its make up, or its decisions, are now inconsequential. Still, there are those whose job is to overanalyze everything, and those, whose ideological persuasion, is to believe that what there is a difference between the “left” and the “right.”

One such place is The Hill, which writes that “the midterm-election horserace is into its final furlong — and that means most of the attention of the political world is focused, understandably, on who’s up and who’s down; who will win and who will lose.But if Republicans succeed in their quest to secure a Senate majority on Tuesday, what will really change on Capitol Hill? The answer is “plenty” – both in terms of policy and politics.”

We’ll agree to disagree, but since someone has to pay attention to the proceedings in the most farcical and polarized, if only for public consumption purposes, Congress in history may as well present what The Hill thinks will happen.

Here are the five areas to watch according to The Hill.

1. Will President Obama’s big achievements be hollowed out?

Republicans say that if they gain control of Congress they will start chipping away at two of the Obama administration’s biggest victories: financial reform and healthcare.

The GOP could well decide against attempting another full repeal of the Affordable Care Act….

The Dodd-Frank financial law is high on the hitlist of GOP lawmakers. They want to ease capital requirements for large insurance companies, create both a board of directors and a new inspector-general position for the Consumer Financial Protection Bureau, and streamline a process for banks deemed too big to fail.

More generally, Republicans have made it clear that Obama’s regulatory agenda is a prime target.

With control over the budget and appropriations process, Republicans could cut off funding that is needed to implement or enforce regulations ….

The GOP will also probably ramp up efforts to push through the Keystone XL pipeline and expand natural-gas exports.

A GOP-controlled Senate will make it even tougher for Obama to confirm nominees, a process that hasn’t exactly been plain sailing even with Democrats in charge……

3. Obama to stock up on veto pens

Obama has had to pick up his veto pen on just two occasions since he took office in 2009, largely because Democrats have controlled at least one chamber of Congress throughout that time.

He can expect to spend his final two years using his veto to protect earlier legislative victories, rather than seriously attempting to rack up new ones.

If Republicans take over the Senate, Sen. John McCain (R-Ariz.) will take the gavel at the Armed Services Committee. He is almost certain to turn the spotlight back onto the Obama administration’s missteps in Benghazi — especially the ones that Republicans say were committed by Hillary Clinton, who was secretary of State at the time.

Congressional Republican make little secret of the fact that they believe the controversy could hurt Clinton’s chances of winning the White House in 2016. Senate control would ensure they could keep it high up on the news agenda.

Republicans also are likely to push for a more aggressive U.S. response to the militants of the Islamic State in Iraq and Syria, or ISIS. They have long argued that the Obama administration isn’t being aggressive enough in that fight…..

It will be up to the GOP to push a bill across the finish line, just as 2016 presidential contenders ramp up their campaigns. Many national security experts have argued that letting the current law expire would be disastrous.

Whoever wins and loses on Tuesday night, much of the political world will turn its focus to 2016 as soon as dawn breaks on Wednesday.

If the GOP controls both chambers in the new Congress, its leaders will take every step over the following two years with an acute appreciation of how their moves might affect the 2016 race for the White House.

And while we appreciate The Hill’s enthusiasm, we are far more interested in the take of the one company that in most people’s opinions, comes closest to actually running not only the Fed, but the US itself: Goldman Sachs……

Oddly enough, virtually nobody, when asked what would change if party X takes over party Y in the [House|Senate|Presidency], has replied “nothing.” Which is precisely why it is the right answer.

Though Foremost has played a pivotal role in McConnell’s life, bestowing the senator with most of his personal wealth and generating thousands in donations to his campaign committees, the drug bust went unnoticed in Kentucky, where every bit of McConnell-related news has generated fodder for the campaign trail. That’s because, like many international shipping companies, Chao’s firm is shrouded from public view, concealing its identity and limiting its legal liability through an array of tax shelters and foreign registrations. Registered through a limited liability company in the Marshall Islands, the Ping May flies the Liberian flag.

From the Nation article: Mitch McConnell’s Freighted Ties to a Shadowy Shipping Company

Well this is interesting. Particularly with the Senate Minority Leader (and major Republican establishment crony) fighting for his life in the Kentucky Senate race.

Before the Ping May, a rusty cargo vessel, could disembark from the port of Santa Marta en route to the Netherlands in late August, Colombian inspectors boarded the boat and made a discovery. Hidden in the ship’s chain locker, amidst its load of coal bound for Europe, were approximately 40 kilograms, or about 90 pounds, of cocaine. A Colombian Coast Guard official told The Nation that there is an ongoing investigation.

The seizure of the narcotics shipment in the Caribbean port occurred far away from Kentucky, the state in which Senator Mitch McConnell is now facing a career-defining election. But the Republican Senate minority leader has the closest of ties to the owner of the Ping May, the vessel containing the illicit materials: the Foremost Maritime Corporation, a firm founded and owned by McConnell’s in-laws, the Chao family.

McConnell’s ties to the Chaos go back to the late 1980s, when James Chao began donating to the senator. In 1993, McConnell married James’s daughter, Elaine Chao, a Republican activist and then-former Reagan administration official who would later serve as Secretary of Labor in the George W. Bush cabinet. James Chao emigrated to the United States from Taiwan, and founded the Foremost Maritime Corporation upon settling in New York. The company has grown significantly over the years, from acting as maritime agent during the Vietnam War to controlling a fleet of approximately 16 dry bulk cargo ships in operation today.

The Republican Senate minority leader’s personal wealth grew seven-fold over the last ten years thanks in large part to a gift given to him and his wife in 2008 from James Chao worth between $5 million and $25 million (Senate ethics forms require personal finance disclosures in ranges of amounts, rather than specific figures). The gift helped the McConnells after their stock portfolio dipped in the wake of the financial crisis that year, and ensured they could pay off more than $100,000 in mortgage debt on their Washington home.

The generous gift made McConnell one of the wealthiest members of the Senate, with a net worth averaging around $22.8 million, according to the Washington Post’s review of his financial disclosures.

Just in case you didn’t think these sorts of relationships have a direct effect on U.S. foreign policy, think again…

The ties between McConnell and his in-laws have come under scrutiny before. In 2001, they were probed in depth by The New Republic in an article that charged that McConnell led an effort to soften his party’s criticism of China. Through James Chao, who was a classmate of Jiang Zemin, the president of China in the 90s, McConnell and his wife met with Jiang several times, both in Beijing and in Washington.

McConnell subsequently tempered his criticism of Chinese human rights abuses, and broke with hawks like Senator Jesse Helms to support Most Favored Nation trading status with China. ??As Foremost established closer ties with mainland China, McConnell endorsed the position that the United States should remain “ambiguous” about coming to the defense of Taiwan. In 1999, McConnell and his wife appeared at the University of Louisville with Chinese Ambassador Li Zhaoxing. Li used the opportunity to bash congressional leaders for rebuking China over its repression of the Falun Gong religious sect.

“Any responsible government will not foster evil propensities of cults by being over-lenient,” Li reportedly said at the event with McConnell and Chao. Rather than distance himself from the remarks, McConnell reportedly spoke about his “good working relationship” with Li.

Requests for comment to the McConnell team about the Ping May cocaine incident have gone unanswered.

McConnell has positioned himself over the years as a tough on drugs politician. In 1996, McConnell was the sole sponsor of the Enhanced Marijuana Penalties Act, a bill to increase the mandatory minimum sentencing for those caught with certain amounts of marijuana. A press release noted that his bill would make “penalties for selling marijuana comparable to those for selling heroin and cocaine.”

In recent weeks, McConnell has touted his role in calling for more federal money to be used for drug enforcement.

All that said, the article above gives voters some important information on McConnell, particularly with regard to how the source of his wealth and his family ties actively impact his policy choices in Washington.

Like the Democratic Party leadership, the Republican Party establishment consists of a cadre of cronies merely trying to enrich themselves. McConnell is a huge part of the problem, and the American public should know more about him.

One thought on “What Will Change If/When Republicans Take The Senate? …. the short answer is “nothing””