It’s All Rigged – There Are No Free Markets 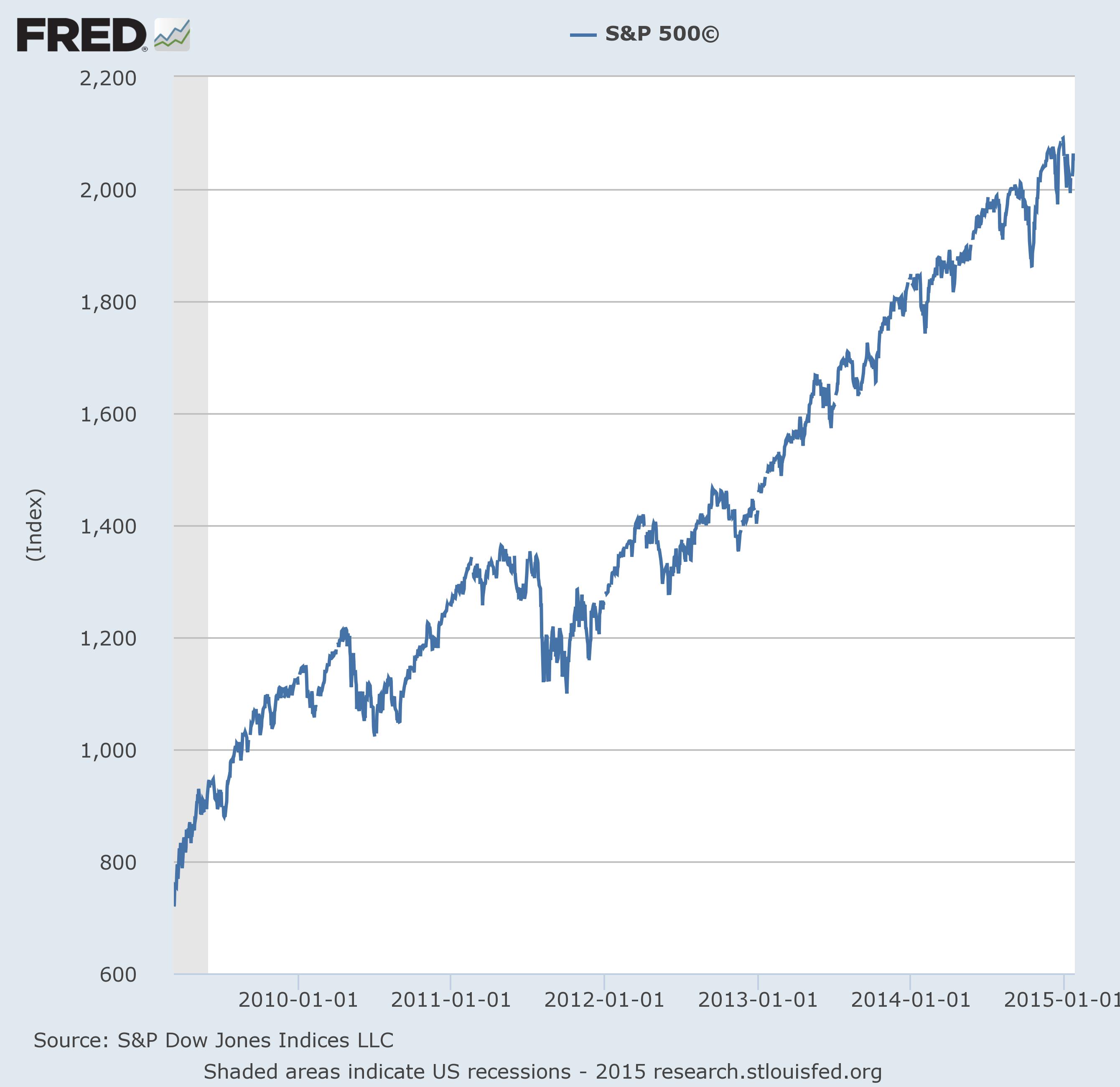 from David Stockman of  DavidStockmansContraCorner.com January 27, 2015

Shortly after yesterday’s open, the S&P 500 was down nearly 2% and off its recent all-time high by 3.5%. But soon the robo-machines and day traders were buying the “dip” having apparently once again gotten the “all-clear” signal.

Don’t believe it for a second! The global financial system is literally booby-trapped with accidents waiting to happen owing to six consecutive years of massive money printing by nearly every central bank in the world.

Over that span, the collective balance sheet of the major central banks has soared by nearly $11 trillion, meaning that honest price discovery has been virtually destroyed. This massive “bid” for existing financial assets based on credit confected from thin air drove long-term bond yields to rock bottom levels not seen in 600 years since the Black Plague; and pinned money market costs at zero—-for 73 months running.

What is the consequence of this drastic financial repression along the entire yield curve? The answer is bond prices which keep rising regardless of credit risk, inflation or taxes; and rampant carry trade speculation that can’t get out of its own way because  central banks have made the financial gamblers’ cost of goods—the “funding” cost of their trades—-essentially zero.

Needless to say, this is all too good to be true because it has generated humungous funding mismatches. That is, on the warranted word of central bankers—-who are petrified of a Wall Street hissy fit in any event—-speculators have funded long-term debt and equity securities with overnight money which must be rolled every day. This “works”, of course, until the carry-traders are hammered by a sudden, powerful and unexpected shock owing to either a sharp drop in the price of their “long” asset or spike in the carry cost of their overnight funding.

This destruction of fear is commonly measured by the VIX index, but that’s only the tip of the iceberg. Where the amnesia really shows up is in the carry trades—-most of which materialize in the options and futures markets, and which are fabricated or “bespoke” in the meth labs of Wall Street trading houses.

Notwithstanding a few short, sharp stock market corrections in recent months, the six-year central bank suppression of fear remains largely in tact. Looked at in terms of the trading charts since the March 2009 bottom, the buy-the-dips crowd remains supremely confident that the bull is still running up hill.

Accordingly, beneath the parabolic run pictured above, there has set-in a monumental spree of speculation and leveraged gambling that makes Wall Street’s pre-crisis plunge into toxic mortgage deals look like a Sunday School picnic.

Just last week, for example, after the Swiss National Bank’s surprise abandonment of the 120 peg, the CHF soared by 40%. Literally within minutes they were carrying currency traders off the field on their shields because they had been leveraged 50:1.

It might be asked who in their right mind would fund currency cowboys on 2% margin? The answer, of course, is nearly every  major dealer in the casino! But that’s just the herd at work.

The truly scary part is the reason for this collective recklessness. Currencies move by inches, not yards and never miles at a time, the Wall Street apologists declaimed. And, besides, the SNB had double-promised that it would never, ever remove the peg.

So fast money traders borrowing short in CHF and speculating long in Italian 10-year bonds thought they were shooting fish in a barrel.  Mario Draghi had guaranteed that he would buy their bonds yielding 1.95% at the time at ever rising prices; and on the funding side, the SNB had pledged that speculators could borrow virtually zero carry costs up to 95 cents on the dollar for so long as they pleased. Pocketing a 190 basis point spread plus capital gains on virtually no capital invested, speculators were truly laughing all the way to the bank

So last Thursday’s CHF massacre happened because it was not supposed to happen!  That is, financial markets are no longer honest, rational, stable or independent; they are merely gambling hall subsidiaries of the central banks where most of the punters still believe that the latter will not permit risk asset prices to fall for more than a day or two or funding costs to rise unexpectedly.

The reason that the casino has become so stupendously dangerous, therefore, is that the whole financial house of cards—including vastly over-valued asset prices of every kind and insanely extended leverage like the CHF currency speculations—all depend on maintenance of confidence in central bank competence and omnipotence.

But it’s not so—not by a long shot. Last week’s CHF episode rang the bell. And as the cascades of collateral damage begin to flow in, it will become harder and harder to hide the truth—-even from the heedless gamblers in the casino.

The next layer of leverage behind the currency speculators in the CHF trade was comprised of households all over central and eastern Europe who took out mortgages denominated in Swiss francs owing to dirt cheap interest rates. Suddenly, the amount they owe is soaring in local currency, and banks and government throughout the region are scrambling to forestall a disaster.

In the case of Poland, for instance, outstanding CHF mortgages total $36 billion or nearly 8% of GDP. On a US scale basis, that would be the equivalent of $1.5 trillion in home mortgages that suddenly soared in repayment costs.

Not surprisingly, the allegedly “conservative” government of Poland has insisted that zloty-based homeowners will be protected from the CHF flare-up, but that the government will not bear the cost. That is, the banks are going to be hammered by state regulators just like they were in Hungary awhile back.

One thing leads to another and ultimately to a daisy chain of wreckage when honest “price discovery” is destroyed by the central banks. Even now several Austrian, Italian and other European banks, which plunged into the CHF lending business, are on the rocks.

It is only a matter of time before one “surprise” after another turns up owing to the speculative mania of the last six years. And it is virtually certain that the central bankers who have presided over this fiasco will be caught as flat-footed as they were during the sub-prime fiasco.

In a nearby re-post from the New York Times this morning (Wake-Up Call To Yellen: Here’s How To Buy A BMW On Food Stamps—–Soaring Auto Junk Loans), we suggested that Janet Yellen needed a wake-up call. The NYT obsessively “fact checks” everything—so here’s the real deal. The auto junk paper market is so out of hand that an unemployed NYC food stamp recipient recently got a $30,770 loan to buy her daughter a BWM 328xi so that she could drive to work…..in style, apparently.

This beneficent mom told no lender or dealer a lie. As related by the NYT:

Ms. Payne went with her daughter to a dealership that arranges loans for Santander and other auto lenders to buy the car. She said an employee at the dealership in Great Neck, N.Y., assured her that, even though she was on food stamps, she could afford the loan. At the time, Ms. Payne said she thought she was co-signing the loan with her daughter.

Needless to say, Santander Consumer USA is a pure artifact of financial engineering deeply subsidized and coddled by the Fed. As a former LBO and now IPO, it is overwhelmingly funded with securitized auto paper. That is, it is able to fund BMW loans to mom’s on food stamps because it can bury them in massive baskets of loans that are then sliced and diced by Wall Street, and sold to investors desperate for “yield”.

If that sounds familiar—it is. Yellen did not see it coming last time, nor did the buy-the-dip bulls who claimed that the market was “cheap” at its peak in October 2007.

The S&P was then trading at 20X reported LTM earnings. That’s where it is today, as well.

But there is one huge difference. This time the casino gamblers have been playing with free money for 73 months running.

Accordingly, the joint is an accident waiting to happen. Forget the dip. Get out of dodge.

And in this must-see interview by USA Watchdog’s Greg Hunter, Michael Pento helps to break it down and explain it all in laymen’s terms. Give it a listen.

Free Markets Have Been Completely Obliterated

The “Bullard Put” Is Gone: “It Is Reasonable To Hike Rates In June Or July”