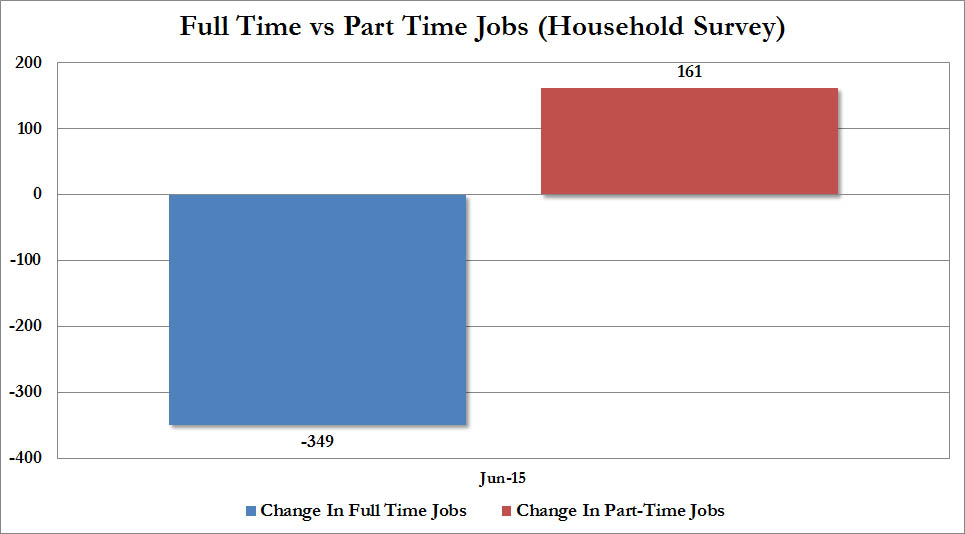 By the way, it is 1984 in case you are not paying attention. Today we had the latest announcement from the Ministry of Truth. The official unemployment rate is now 5.3%. Before long, they’ll have it at 0%.

Anyone who doesn’t have their head in the sand (or that other place where the sun doesn’t shine) knows this is complete Bu!!$#i%. And anyone in the mainstream who acknowledges that fact, for example the latest presidential candidate to attempt to speak any hint of truth, Donald Trump is immediately marginalized and made out to be a kook. We’ll save that for another post. I in no way endorse him but merely applaud for him calling BS on all the propaganda being fed to the sheep.

Let’s ignore all the cheerleading from the blowhards in the MSM outlets such as all those pathetic characters on CNBS and just rip it right apart.

According to the BLS, in June the US added 223K payrolls, less than the expected 233K, even as the the US unemployment rate dropped to 5.3% from 5.4%. Worse, the previous number was revised from 280K to  254K. Worst of all, average hourly earnings were flat despite expectations of a 0.2%, and a big drop from last month’s 0.3%.

So much for escape velocity in payrolls: not only did June disappoint but the last two months were revised lower by 60K.

But the worst news in the report was the average hourly earnings, which were expected to rise by a modest 0.2%, down from last month’s 0.3%. Instead they were unchanged at $24.95.

Why? Because wages continue to track the real state of the labor market as shown by the total civilian employment to population ratio, not the ridiculously fabricated headline unemployment number.

The devastation of the US labor force continues.

In what was an “unambiguously” unpleasant June jobs payrolls report, with both April and May jobs revised lower, the fact that the number of Americans not in the labor force soared once again, this time by a whopping 640,000 or the most since April 2014 to a record 93.6 million, with the result being a participation rate of 62.6 or where itt was in September 1977, will merely catalyze even more upside to the so called “market” which continues to reflect nothing but central bank liquidity, and thus – the accelerating deterioration of the broader economy.

While the kneejerk reaction algos were focusing on the +223K jobs number reported by the Establishment Survey, few if anyone notched that the Household survey reported a decline of 56,000 workers in June.

But what’s worse, is that according to this survey which according to some is far more reliable than its peer, the composition of the US labor force once again deteriorated rapidly with part-time jobs added in June surging by 161,000 while the number of full time jobs tumbled by 349,000.

Putting this number in context, while the total number of US workers has long since surpassed its previous crisis high, the number of full time US workers has yet to overtake its November 2007 lever of 121.9 million, and in June dropped to 121.1 million.

Why is this a problem: because while the US still has 800k full-time jobs to go to at least regain the prior peak, during the same time period the US civilian, non-institutional population has risen from 232.9 million to 250.7 million: an increase of 17.724 million!

Since 2007 The US Has Lost 1.4 Million Manufacturers, Gained 1.4 Million Waiters And Bartenders

US layoffs mount amid signs of economic slowdown