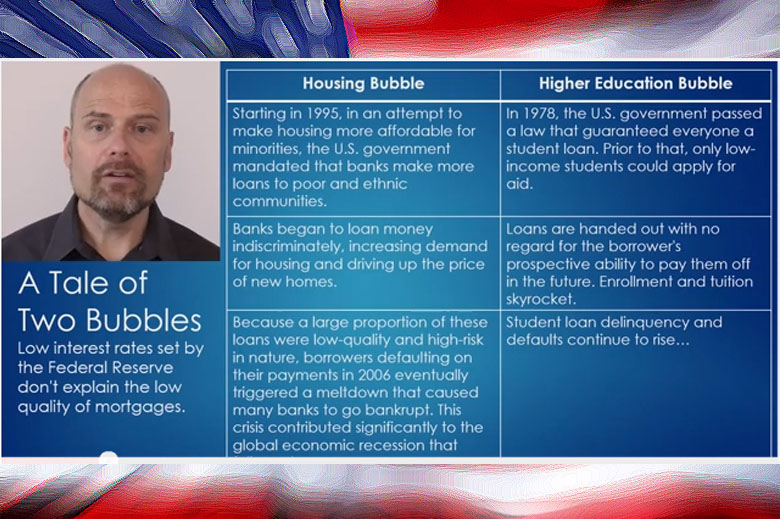 Could it be possible that the Fed itself, with its imbecilic monetary policies, and the Federal government with its resultant $1.2 trillion in cheap debt, is the cause for tuition prices which are soaring by 6% every year, some three times higher than the increase in broad wages?

Not only is it possible, but it is precisely what has happened. And now, even the Fed has figured it out.

“There’s widespread concern among policy makers and college officials that it has become too easy for students to borrow large amounts of money without necessarily appreciating what they are getting into,” said Terry Hartle of the American Council on Education, a trade group representing college and university presidents.

The government’s student-credit spigot burst open in recent decades as Americans sought a leg up in an increasingly sophisticated economy, and accelerated during the last recession. Annual student-loan disbursements—which include some private loans but come mostly from the federal government—more than doubled between 2001 and 2012 to $120 billion, according to the New York Fed’s David O. Lucca, Taylor Nadauld and Karen Shen.

Federal student loans allow Americans to borrow at below-market rates with scant scrutiny of their credit and no assessment of their ability to repay. Meanwhile, federal Pell grants, which help low-income college students and don’t need to be repaid, more than tripled to more than $30 billion a year between 2001 and 2012. Education tax credits roughly quadrupled to about $20 billion a year.

The Shocking Increase Of College Tuition

…..with student debt being so easily accessible anyone can use (and abuse), it gives colleges ample room to hike tuition as much as they see fit: after all students are merely a pass-through vehicle (even if one which for the most part represents non-dischargeable “collateral”) designed to get funding from point A, the Federal Government to point B, the college treasury account.

It should thus come as no surprise that in a world in which colleges can hike tuition by any amount they choose, and promptly be paid courtesy of the federal government, and with endless amounts of propaganda whispering every day in the ears of impressionable potential students the only way they can get a well-paying job is to have a college diploma (see San Francisco Fed’s latest paper confirming just this) there is no shortage of applicants willing to take on any amount of debt to make sure this cycle continues, that soaring tuition costs are one of the few items not even the BLS can hedonically adjust to appear disinflationary.

End result: tutitions have literally exploded across the country in both public and private colleges…..

The Truth About The College Student Debt Crisis

In the following video presentation Stefan Molyneux breaks it down in great detail drawing parallels between the Student Debt Bubble and the Housing Bubble, both inflated by excessive easy credit.

Who Is Stoking The Trillion Dollar Student Debt Bubble?

From Delinquent To ‘Seriously’ Delinquent: Another Worrying Trend For Student Debt Revealed

“Staggering” Student Loan Defaults On Deck: 27% Of Students Are A Month Behind On Their Payments