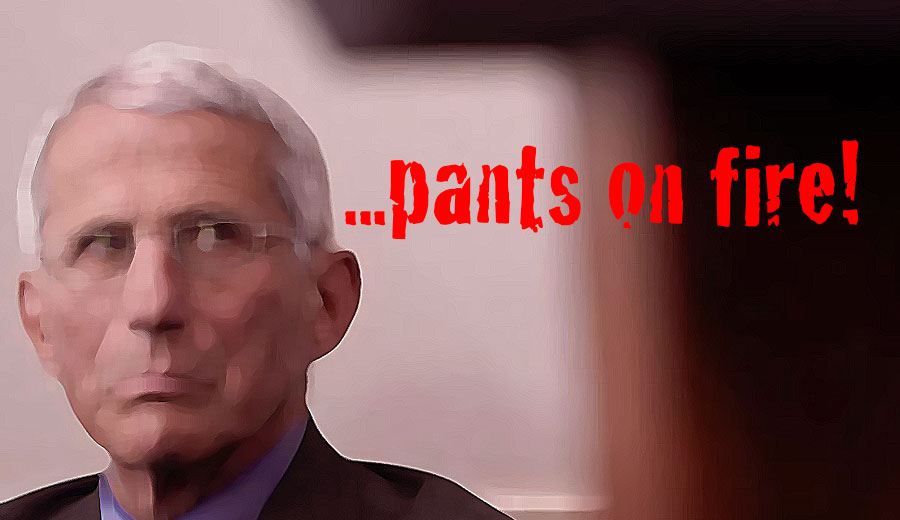 Dr. Anthony Fauci and the rest of President Biden’s COVID advisors have been proven wrong about “the science” of COVID vaccines yet again. After telling Americans that vaccines offer better protection than natural infection, a new study out of Israel suggests the opposite is true: natural infection offers a much better shield against the delta variant than vaccines.

The study was described by Bloomberg as “the largest real-world analysis comparing natural immunity – gained from an earlier infection – to the protection provided by one of the most potent vaccines currently in use.” A few days ago, we noted the mainstream press was finally giving voice to scientists to criticize President Biden’s push to start doling out booster jabs.

Well, this study further questions the credibility of relying on vaccines, given that the study showed that the vaccinated were ultimately 13x as likely to be infected as those who were infected previously, and 27x more likely to be symptomatic.

This time, the data leave little doubt that natural infection truly is the better option for protection against the delta variant, despite the fact that the US won’t  acknowledge the already infected as having antibodies protecting them from the virus.

As the first country to achieve widepsread coverage by the vaccine, Israel is now in an unthinkable situation: daily case numbers have reached new record levels as the delta variant penetrates the vaccines’ protection…

Read the study pre-print below:

Here’s how the very unexpected Bloomberg article, which was published this past weekend, began:

Anecdotes tell us what the data can’t: Vaccinated people appear to be getting the coronavirus at a surprisingly high rate. But exactly how often isn’t clear, nor is it certain how likely they are to spread the virus to others.

Though it is evident vaccination still provides powerful protection against the virus, there’s growing concern that vaccinated people may be more vulnerable to serious illness than previously thought.

There’s growing concern that vaccinated people may be more vulnerable to serious illness from the Covid delta variant than previously thought https://t.co/R6HsDJu9p0

And the same day as the BBG headline, there was this from UK government-funded BBC…

It is now a serious question that has implications for whether children should ever be vaccinated. And whether we use the virus or booster shots to top up immunity in adults. Both have become contentious issues.

“We could be digging ourselves into a hole, for a very long time, where we think we can only keep Covid away by boosting every year,” Prof Eleanor Riley, an immunologist from the University of Edinburgh, told me.

A mere month or more ago such statements found in these couple of mainstream media articles would get a person possibly suspended from Facebook or Twitter.

….and just like that: The Truth Must Be Banned
Twitter Permanently Bans Alex Berenson After Viral COVID Tweets

It was never a matter of if, but when.

Science journalist Alex Berenson has been permanently suspended from Twitter, just one day after a viral series of tweets spotlighting an Israeli preprint study which showed that natural immunity from a prior Covid-19 infection is 13 times more effective than vaccines against the delta variant.

They have defamed me and denied me a very important platform. But with your help I’ll do my best to keep getting the truth out.

Adding his tweet activity from the Israeli study – revealing nearly three million impressions and over a quarter million people who interacted with the tweet.

Berenson made headlines in July when Dr. Anthony Fauci appeared on CNN‘s “State of the Union,” calling Berenson’s CPAC comments that the vaccine effort is a ‘scam’ was ‘horrifying.’

“The government was hoping that they could sort of sucker 90% of the population into getting vaccinated,” Berenson said. “And it isn’t happening.”

But they underscore just how ‘experimental’ the whole scenario is, despite governments in a number of places now mandating COVID-19 vaccines, with boosters just around the corner and already being implemented in some places (with Israel previously being the first) on a mass scale.

Soon we could see health officials pushing a second booster, a third, and on and on it will go…

Even The Daily Beast, which has spent much of the pandemic shaming the ‘vaccine hesitant’ is now admitting that “ultra-vaxxed” Israel is now seeing numbers of infections skyrocket…

“I don’t want to frighten you,” COVID-19 czar Dr. Salman Zarka told the Israeli parliament. “But this is the data. Unfortunately, the numbers don’t lie.”

A massive surge of infections in ultra-vaxxed Israel is pointing to a complicated path ahead. https://t.co/ZVwdlLrxQL

Rev. Jesse Jackson Hospitalized With COVID-19 After Being Fully Vaccinated

COVER-UP: CDC Says Vaccinated May Be as Likely to Spread COVID as Unvaxxed, as Reports of Serious Injuries After Vaccines Surge