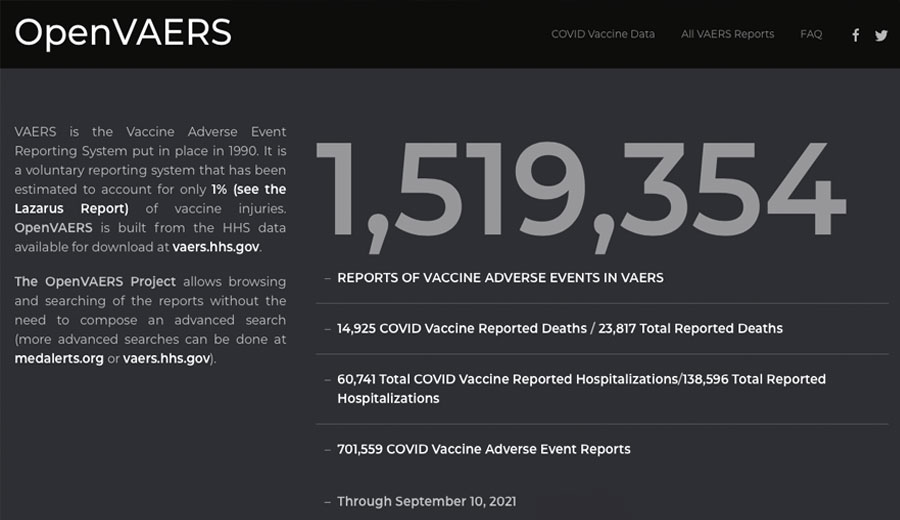 VAERS is the Vaccine Adverse Event Reporting System put in place in 1990. It is a voluntary reporting system that has been estimated to account for only 1% (see the Lazarus Report) of vaccine injuries. OpenVAERS is built from the HHS data available for download at vaers.hhs.gov.

The OpenVAERS Project allows browsing and searching of the reports without the need to compose an advanced search (more advanced searches can be done at medalerts.org or vaers.hhs.gov).

NOTE: There have been more deaths reported to VAERS this year than the combined entire 30 year history-all others vaccines combined. (click the links above for yourself)

Also Note: previous rollouts such as the swine flu have been halted after @50 deaths

VIDEO: Interview with Jessica Rose, PhD — VAERS: What do the Data Tell us

This interview with Jessica Rose, PhD, covers the question of vaccine safety, as it can be evaluated from actual real world data collected into the so called “VAERS” system. The interview covers the question of the magnitude of adverse effects, as compared to previous vaccination programs; the issue of under-reporting, which is considerable; the question of causality between an adverse event and an injection and the extent to which causality can be established, using the Bradford Hill Criteria. There is also a discussion of effectiveness, with Dr Rose answering the somewhat rhetorical question whether these injections are as effective as they are safe. Dr Rose then answers some questions from the audience.

Dr. Jessica Rose is originally from Ontario, Canada. She holds degrees in applied mathematics, immunology, computational biology, molecular biology and biochemistry. You can find her bio at this link.

The slides associated with the session can be downloaded at this link.

VIDEO: the 2 minutes presentation by Dr Rose at an FDA hearing on Sept 17.

“…A government related computer programmer, who works in health care data analytics, has made a declaration under penalty of perjury that according to medical claims submitted to the Centers for Medicare and Medicaid Services (CMS) there are “at least 45,000” vaccine-related deaths due to experimental COVID-19 vaccine injections”

‘I queried data … and have assessed that the deaths occurring within 3 days of vaccination are higher than those reported in VAERS by a factor of at least 5. This would indicate the true number of vaccine-related deaths was at least 45,000.

ANAHEIM, California, July 22, 2021 (LifeSiteNews) – A government related computer programmer, who works in health care data analytics, has made a declaration under penalty of perjury that according to medical claims submitted to the Centers for Medicare and Medicaid Services (CMS) there are “at least 45,000” vaccine-related deaths due to experimental COVID-19 vaccine injections.

“I’m filing papers in federal court today,” Renz said to the enthusiastic crowd. This filing is “based on a sworn declaration, under threat of perjury,” by a female expert whistleblower who attested “that there have been at least, 45,000 deaths from this vaccine.”

Further, these numbers are “based on how many people died within three days of the vaccine in just one system that is reporting to the federal government.”

Renz continued to explain, “there are reportedly around 11 or 12 systems that are reporting deaths and injuries to the government,” and his own estimation is that the real numbers are “immensely higher” than even the 45,000 deaths, even if he can’t immediately prove it.

According to the full data, of all reporting systems, Renz asked, “how many have really died? And why are they covering it up? These people are murdering people. This is complicity at a minimum. People need to be in jail.”

The filed motion was submitted on behalf of America’s Frontline Doctors (AFLDS) against radically pro-abortion Xavier Becerra, Secretary of the U.S. Department of Health and Human Services. It is seeking “a preliminary injunction against Defendants enjoining them from continuing to authorize the emergency use of the so-called [‘vaccines’] … and from granting full Food and Drug Administration (‘FDA’) approval for the Vaccines” related to the following three groups:

Renz told LifeSiteNews that the testimony of the anonymous whistleblower, referred to in the motion as “Jane Doe,” provides evidence that informed consent is not possible without a full disclosure of the true number of deaths related to experimental COVID-19 gene-therapy vaccine injections.

In her actual declaration, “Jane Doe” provides the following testimony:

It is my professional estimate that VAERS (the Vaccine Adverse Event Reporting System) database, while extremely useful, is under-reported by a conservative factor of at least 5. On July 9, 2021, there were 9,048 deaths reported in VAERS. I verified these numbers by collating all of the data from VAERS myself, not relying on a third party to report them. In tandem, I queried data from CMS medical claims with regard to vaccines and patient deaths, and have assessed that the deaths occurring within 3 days of vaccination are higher than those reported in VAERS by a factor of at least 5. This would indicate the true number of vaccine-related deaths was at least 45,000.

AFLDS categorized the apparent and significant under-reported deaths as “shocking” and asserted “informed consent, which is required under the law, is impossible when safety data is so misleading.”   — Article continues below Petition — PETITION: No to mandatory vaccination for the coronavirus

It’s also notable, the motion continued, “that in the 1976 Swine Flu vaccine campaign (in which 25% of the U.S. population at that time, 55 million Americans, were vaccinated), the Swine Flu vaccine was deemed dangerous and unsafe, and removed from the market, even though the vaccine resulted in only 53 deaths.”

With regards to the veracity of Jan Doe’s legal declaration, Renz emphasized his commitment to ensure his source’s identity is protected explaining that he and his team had “seen a number of things” providing veracity to her conclusions, but he was “not willing to talk about what specifically” because he didn’t feel it was appropriate given his responsibility to protect her identity.

He further explained, “as an attorney, to submit this into federal court, we have to have, legally, a good faith belief that its accurate and correct.”

“We have to do our due diligence, we have to believe that this person is accurate and that these numbers are accurate,” he said. “We very much stand behind what we submitted. We believe it to be correct and accurate. We’ve done our due diligence, and to that extent, I’m quite confident that it will stand up in court.”

For those who might have further doubts, Renz asserted:

This isn’t a hard thing to verify. If the federal government wants to argue about this, if these people want to say that what we’re saying is not true, that’s fine, just let us see the numbers. There’s no reason they can’t open this data up to the public. There’s no reason they can’t share it. And if you don’t have anything to hide, you don’t hide it. So, why are they hiding it?

Renz added that he and his team would welcome the opportunity to clarify the actual numbers and “expect when we do, they will be much higher [than even 45,000].”

AFLDS has updated its own estimate of COVID vaccine related deaths based on Jane Doe’s findings with refreshed data. “As of July 9th, reported deaths in VAERS totaled 10,991,” they said. “The CDC whistleblower [Jane Doe] has made a sworn statement that the actual number of deaths are conservatively five-times higher, meaning as of this date we are approaching at least 55,000 vaccine related deaths.”

The veracity of such excessively higher actual numbers as compared to what is passively reported on VAERS, is further corroborated by a 2010 Harvard Pilgrim study which found that “fewer than 1% of vaccine injuries” are reported on this system, leading many to conclude, for quite some time, that actual death and injury numbers due to these experimental biological agents are much greater.

Following his announcement in Anaheim, Renz went on to encourage the crowd, and viewers, to become activists and to spread this news everywhere. Also, in the face of Big Tech censorship, he had a message for these large corporations, including Google, YouTube, Facebook and Twitter: “You are complicit in causing death, and I cannot wait to sue you over and over again!”

“Since we can’t talk about the 45,000 murders, because people were not able to give informed consent because they have been covering up the risk, let’s try and get 45,000 to trend on Twitter. We can’t call it ‘murders,’ but maybe [we can get #45K to trend],” he said.

“Grow some spine!” he urged. “Have some courage! Right? Courage! … You have to be willing to fight, and I want to encourage everyone here to have the courage to fight, and to get others involved. They need to hear about this!”

One thought on “VAERS: Vaccine Adverse Event Reporting System: Interview with Jessica Rose, PhD – VAERS: What do the Data Tell us”