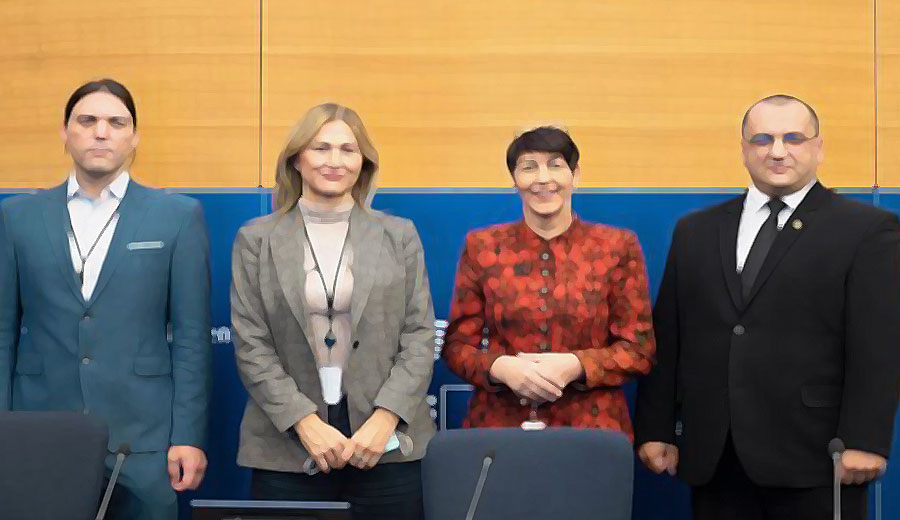 True Heroes
This brought chills to my spine & tears to my eyes.
Please stand up for our children.

Let’s be clear about one thing: No one grants me freedom for I am a free person.

On the 28th five of those same MEPs held another press conference, and while the whole thing is worth watching (embedded above), the highlight is definitely German MEP Christine Anderson who speaks for two of the truest minutes in the EU’s history:

“In the entire history of mankind there has never been a political elite sincerely concerned about the wellbeing of regular people. What makes any of us think that it is different now. – Christine Anderson European Parliament.” pic.twitter.com/oSVYzg81p5

All through Europe, governments have gone to great length to get people vaccinated. We were promised the vaccinations will be a “game changer”, and it will restore our freedom…turns out none of that was true. It does not render you immune, you can still contract the virus and you can still be infectious.

The only thing this vaccine did for sure was to spill billions and billions of dollars in the pockets of pharmaceutical companies.

I voted against the digital green certificate back in April, unfortunately it was adopted nonetheless, and this just goes to show there is only a minority of MEPs who truly stand for European values. The majority of MEPs, for whatever reasons unbeknown to me, obviously support oppression of the people while claiming – shamelessly – to do it for the people’s own good.

But it is not the goal that renders a system oppressive it is always the methods by which the goal is pursued. Whenever a government claims to have the people’s interest at heart, you need to think again.

In the entire history of mankind there has never been a political elite sincerely concerned about the well-being of regular people. What makes any of us think that it is different now? If the age of enlightenment has brought forth anything then, certainly this: never take anything any government tells you at face value

Always question everything any government does or does not do. Always look for ulterior motives. And always ask cui bono?, who benefits?

Whenever a political elite pushes an agenda this hard, and resort to extortion and manipulation to get their way, you can almost always be sure your benefit is definitely not what they had at heart.

As far as I’m concerned, I will not be vaccinated with anything that has not been properly vetted and tested and has shown no sound scientific evidence that the benefits outweigh the disease itself in possible long-term side effects, which to this day we don’t know anything about.

I will not be reduced to a mere guinea pig by getting vaccinated with an experimental drug, and I will most assuredly not get vaccinated because my government tells me to and promises, in return, I will be granted freedom.

Let’s be clear about one thing: No one grants me freedom for I am a free person.

So, I dare the European Commission and the German government: Throw me in jail, lock me up and throw away the key for all I care. But you will never be able to coerce me into being vaccinated if I, the free citizen that I am, choose not to be vaccinated.

Members of the European Parliament Denounce the ‘Abusive’ Green Pass

VIDEO: MEPs press conference on the abusive use of Green Certificate – European Parliament

Speaking at a press conference in Strasbourg on 20 October 2021, members of the European Parliament said that the fundamental rights of all EU citizens are now under threat due to mandatory vaccination and abusive use of the Digital COVID Certificate. They said:

“What we have seen in this crisis is that civil rights and liberties have been transformed from fundamental rights to privileges that governments grant or revoke as they see fit.”

Obedience: doing what you’re told, regardless of what is right.

Resistance: doing what is right, regardless of what you’re told.

Reacting to the increased violations of basic human rights all across EU, members of the European Parliament took a common stand in defence of the fundamental rights of all EU citizens, which are under threat now due to mandatory vaccination and abusive use of the Digital COVID Certificate.

Speaking at a press conference in Strasbourg, on 20 October 2021, they also gave voice to the severe concerns of hundreds of staff members working for the European Parliament, who live under threat of losing their jobs if they do not have the Digital COVID Certificate, aka Green Certificate.

These MEPs decided to give voice to millions of European citizens who are fighting all across EU for their fundamental rights.

MEP Christine Anderson, after emphasising the importance of human rights, said: “let me say this, I am not afraid of this virus. What I am afraid of is governments abusing this or any other «crisis» for that matter, to infringe on civil rights, to revoke them or to question freedom altogether.

What we have seen in this crisis is that civil rights and liberties have been transformed from fundamental rights to privileges that governments grant or revoke as they see fit.

I call on all Europeans to stand up to any government trying to take away our freedom, civil rights and liberties!”

Lawyer and MEP Francesca Donato said that “we have a really terrible situation in Europe today because human rights are not respected […] and all over Europe peaceful protests are violently repressed”.

Introduced as a tool to facilitate freedom of circulation, the COVID Certificate is now being used in many countries by national governments as a “compulsory” passport for every social activity, including employment – she stated – giving the example of Italy.

“And so we are forcing citizens to receive invasive and risky health treatments, because the informed consent that citizens are obliged to sign to receive the vaccines is not free: it’s an extorted consent. So, even when people have medical contraindications for receiving vaccines, they are obliged to take it. They are forced to do it because they would lose the job, would lose their fundamental rights if they don’t do it. And when these people have adverse effects, even very severe adverse effects, they don’t receive any free assistance. Even the reports of adverse effects are very rare. The data of adverse effects that we can read on papers are just underestimated.

So we have a medical issue which has turned into a democratic issue. We must all today stand for the defence of human rights in Europe, we must do it all together and we must do it now”, she concluded.

He described the Digital Green Cert “as a license to spread and infect” that gives “a false sense of security”, since it is not protecting the person from getting or spreading the virus. The Digital Green Certificate “is completely illogical, it is not scientific and must be abandoned”, he added.

Sinčić stated that he, also, “fully support[s] the staff of European Parliament in their positions. The positions of non-discrimination, non-segregation, the freedom to come to the workplace. This is their workplace along with us, the MEP’s”.

“My message to the staff is simple: You are not alone and fight for your rights! We are fighting along with you!”, he concluded.

“Well, if we look now, a few months after this Green Certificate was imposed in the European Union, we see exactly the opposite, that all these rights that, allegedly were supposed to be protected by this regulation, are actually violated right now. People cannot work anymore and they live under the threat of losing their jobs and their livelihoods, if they don’t have this certificate. Is this the type of European Union that we want to build, that we want to accept?”, Terhes said.

Hundreds of people working for the Parliament are faced with the threat “that sooner than later, if they don’t have this Green Certificate, they will be losing their job. But they haven’t done anything wrong. This is the absurd situation. This is not fair to them, it is not fair to the citizens of this Union and it’s not fair to all of us”. For these reasons, “we are here for you and we will fight for you”, Terhes concluded.

The positions expressed publicly by these MEPs, in defence of fundamental rights, including of the staff working for the European Parliament, are shared by many others, who will join together to provide an active opposition to the constant attacks on fundamental rights caused by the misuse of the Digital COVID Certificate.