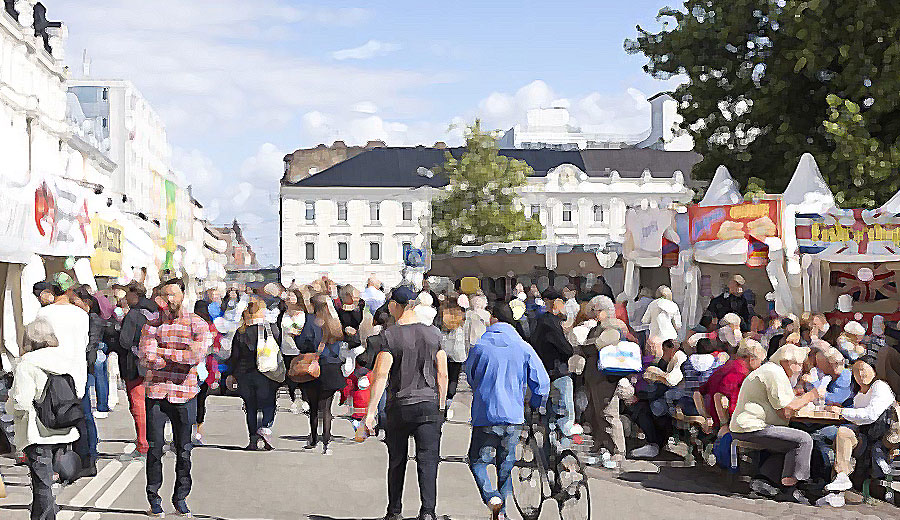 The same day, new research was released from Cornell showing that those exact policies were completely useless

For two years the pervasive groupthink amongst the public health profession, the media and many politicians ensured that there would be no criticism of public health policies, no matter how absurd or useless they immediately proved to be.

More importantly, researchers and scientists mostly stayed silent — afraid of retribution from the National Institute of Health’s Francis Collins and Anthony Fauci who organized PR campaigns to disparage and impugn the credibility of anyone who criticized their mandates.

Left wing political activists like Gregg Gonsalves cheered on this illiberal, disgraceful attitude, receiving praise from Collins for lying about and smearing those who dared disagree:

Outside of a few brave individuals like Jay Bhattacharya, John Ioannidis, Scott Atlas, Martin Kuldorff and Sunetra Gupta, the “fringe epidemiologists,” most were unwilling to speak out against the widespread proliferation of pandemic theater.

As the pandemic response has driven the runaway growth of the inflation crisis while learning losses accelerate and mental health concerns spiral, we’re now seeing the devastating results of governmental incompetence.

And thankfully, more than two years after the start of our pointless, harmful COVID “response,” researchers are finally willing to point out the obvious — pandemic “interventions” do not work.

A new research letter from Cornell University in New York details the spread of the coronavirus on campus from late 2021 into 2022.

The letter and the data behind it was compiled and written by several Cornell employees, who had every reason to support their employers policies of mass testing, forced vaccination and masking.

In fact, the abstract of the paper specifically referenced those policies and the resulting assumptions when examining the data they collected:

A New WHO COVID Report Once Again Proves Sweden Right

Throughout the pandemic, Sweden has faced an enormous amount of criticism and international pressure due to their willingness to stick to established public health principles and pre-pandemic planning.

Instead of following the incessant, anti-science groupthink that became part of a virus-induced political religion, Sweden chose instead to not impose the strict lockdowns that Dr. Fauci recently claimed were not tried in the US.

Sweden never mandated masks be worn in indoor public spaces, correctly identifying the lack of evidence supporting their use.

They kept schools open in defiance of teacher’s unions and politically motivated “experts” in the United States who advocated for a policy with zero benefits and tremendous harms.

Essentially, Sweden followed the actual science and not The Science™, with the requisite trademark and capital letters. That would include the guides that were prepared prior to the panic, inaccurate modeling, political motivations and crisis obsession took over.

Even last year it became readily apparent that no one in the media or public health establishment was willing to discuss the inarguable reality that Sweden’s results were no worse than many countries across the globe — and significantly better than many, many others.

In general, comparisons have been mainly focused on COVID specific outcomes, but now the World Health Organization, fresh off demanding authoritarian powers over sovereign nations whenever they deem necessary, has released a new report on their estimates of excess mortality.

Excess mortality is simply the number of deaths above the expected rate in a given country in a specific time frame.

Excess mortality captures all of the outcomes in a country — it’s not limited to COVID related metrics or any other specific cause.

For that reason it can often be a better indicator of the true cost of the pandemic, whether that be COVID mortality or the consequences of lockdowns, hospital policy or mental health breakdowns.

The WHO report contains many illuminating statistics from the first two years of the pandemic which illustrate that Sweden’s approach was undoubtedly the correct one; once again contradicting the expert derived “consensus” that advocates for endless restrictions on normal life.

Sweden ranks 25th out of the 30 countries.

In summary, Sweden, the country that eschewed strict lockdowns, had some of the lowest mask usage anywhere on earth, kept schools open and society functioning as much as possible, and had one of the lowest rates of overall mortality of any country in their region.

While a single graph or chart may not necessarily disprove pro-mandate arguments, this one comes remarkably close.

If lockdowns, masks and other restrictions were as important as experts and politicians preach that they are, these results should not be possible.

Countries like Germany, Portugal and the Czech Republic were all praised for having “science based” responses with strict lockdowns, and extremely high rates of mask compliance.

Sweden vastly outperformed each of them.

But let’s dive in a bit deeper.

One of the more common refrains from mask advocates is that US states such as New York, New Jersey and others have poor cumulative results because they weren’t aware early on that masks “work,” so their policies were adjusted and spread was successfully reversed by mask mandates and other restrictions after the first wave.

However, Sweden shows the exact opposite.

Restrictions in Sweden for the entirety of 2020 and 2021 were consistently among the least authoritarian and invasive when compared to other western countries.

Once again, if mask mandates, lockdowns and strict vaccine based policies were so important and effective, we’d expect the outcomes in 2021 to be worse in Sweden, as most of the world experienced increased spread with more transmissible variants.

Instead we see the exact opposite:

Black bars indicate the 2020 rate in each country, while the orange bars are the 2021 rates.

Although the determination of pro-mandate fanatics to exclusively compare Sweden to other Scandinavian countries is nonsensical, the 2021 excess mortality rates show Sweden with lower numbers than both Finland and Denmark.

The New York Times compared Australia’s COVID results to the United States, despite Australia being an island nation many thousands of miles away with 1/10th the population, so can we finally put the “Sweden did worse than Finland and Norway” nonsensical argument to bed now? https://t.co/oTuImdpH9m

Their numbers were also lower than a number of other countries that imposed mask mandates and strict vaccine passports like Ireland, Portugal and Greece.

Revisiting the overall chart from 2020-2021, it’s important to highlight several other countries that had much stricter rules than Sweden:

All fared worse than Sweden.

The lockdown and mask apologists simply offered no explanation for this.

Oh sure, there are excuses and misdirections, but no actual explanations.

Yes, Sweden had higher cumulative rates than the other Scandinavian countries, but viewing them in context shows how similar they actually were, outside of Norway, which was essentially a global exception.

Norway, however, had significant rates of spread in late 2021 that would not be counted until the 2022 data is in.

In general, the Scandinavian countries were more lax than most of continental Europe regardless.

Here are several notable countries and how much higher than excess mortality rates were from 2020-2021:

All of these countries had much harsher restrictions than Sweden with significantly worse results.

No matter how hard they try, every available piece of data and evidence continues to contradict the assertions made by incompetent experts desperate to protect their disgraced reputations and future grants.

Masks, lockdowns and strict discrimination at nearly every indoor business were all proven to be completely ineffective, both at reducing infections and overall mortality.

Sweden’s willingness to follow science and not The Science™ meant that they limited the negative impacts of COVID while avoiding higher numbers of deaths from other lockdown-derived consequences.

The vast majority of mainstream media outlets have no interest in covering these results because it contradicts the policies they’ve strongly advocated for and consistently promoted.

CNN, MSNBC, The New York Times and many other mainstream left wing publications did their best to ensure that corporations, politicians, teacher’s unions and other decision makers had the cover to enforce seemingly endless mandates.

Disturbingly, toddlers are still masked in New York City, which appears to be heading back towards mask mandates and vaccine passports (now with boosters!).

School districts across the United States have already decided to mandate masks due to a slight increase in cases.

These policies will now be an endless, reoccurring threat in anti-science areas like Chicago, San Francisco and Los Angeles.

All based on the lie that masks work. A lie that Sweden helps expose.