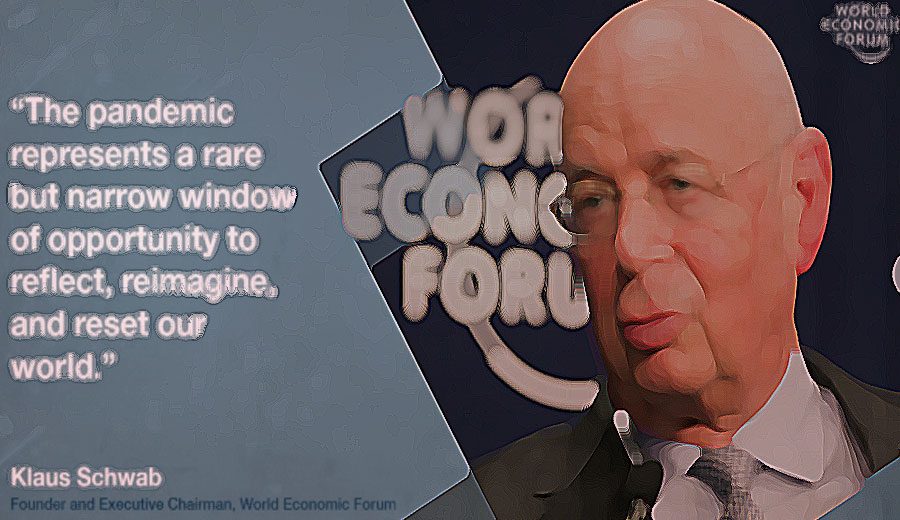 Authored by Birsen Filip via The Mises Institute,

The covid-19 pandemic featured an unprecedented fusion of the interests of large and powerful corporations with the power of the state. Democratically elected politicians in many countries failed to represent the interests of their own citizens and uphold their own constitutions and charters of rights. Specifically, they supported lockdown measures, vaccine mandates, the suppression of a variety of early treatment options, the censorship of dissenting views, propaganda, interference in the private spheres of individuals, and the suspension of various forms of freedom. All of these policies and measures were centrally designed by the social engineers of the pandemic.

Globalists, who are obsessed with societal control, decided to take advantage of the pandemic in order to increase their authoritarian power. Prominent among them was, Klaus Schwab, founder and executive chairman of World Economic Forum (WEF). In June 2020, he stated that “the pandemic represents a rare but narrow window of opportunity to reflect, reimagine, and reset our world.” According to him, “every country, from the United States to China, must participate, and every industry, from oil and gas to tech, must be transformed.”

It is no secret that the WEF has focused on accelerating the implementation of central planning for the entire global population since the early days of pandemic. This plan to establish a new world order, known as the Great Reset, was a key theme at the recent annual meeting of the WEF, which was held during May 22–26 in Davos, Switzerland.

Drastic changes to the world order like the Great Reset do not happen spontaneously; rather, they are designed by global policy makers, including influential billionaires, politicians, celebrities, biased academics, wealthy philanthropists, and the bureaucrats of international organizations and institutions. These types of people support social engineering, because it will enable them to acquire control over the world’s wealth and natural resources, and strengthen their ability to shape society as they see fit.

Like their predecessors across history, the social engineers of the WEF believe that “there must be no spontaneous, unguided activity, because it might produce results which cannot be foreseen and for which the plan does not provide. It might produce something new, undreamt of in the philosophy of the planner.”

Based on the WEF agenda, the successful completion of the current industrial transformation will require redesigning and controlling every minuscule aspect of human life and behavior, including the private spheres of individuals, the economy, politics, and societal organizations, without the possibility of voluntary and spontaneous cooperation between individuals based on their will, values, thoughts, and beliefs. We were warned almost two centuries ago that when this type of tyrannical power succeeds, it will be “busy with a multitude of small” tasks penetrating “into private life,” governing families, and dictating the “actions” and “tastes of individuals.”

In fact, some of the most ridiculous controls proposed by the WEF included limiting the washing of jeans to no “more than once a month” and “pyjamas once a week.” The WEF also advocates for transforming entire food systems by encouraging people to consume insects, arguing that “insect protein has high-quality properties and can be used as an alternative source of protein throughout the food chain, from feed for aquaculture to ingredients for nutritional supplements for humans and pets.” Reforming the food system would also involve eating “cultured meat,” referring to “meat product created by cultivating animal cells in a controlled lab environment.”

The WEF also supports the elimination of “car ownership,” as “paying for a ride or delivery is as easy as tapping a smart phone app,” and “renting a vehicle” means that “car loans and insurance payments shrink or disappear.” Ultimately, the Great Reset aims to create a world where “you will own nothing, and will be happy” by 2030, as people will not possess any private property and rent everything they “need in life.”

However, this premise ignores the fact that private property ownership is associated with the advancement of civilizations, higher stages of material and moral development, and the development of modern family life. The WEF scenario would also diminish the sense of security, which is strengthened by the possession of private property.

Once the Great Reset is complete, individuals will essentially have their thinking and decision-making “done for them by men much like themselves, addressing them or speaking in their name.” Such a “desire to force upon the people a creed which is regarded as salutary for them is … not a thing that is new or peculiar to our time.” However, as various totalitarian regimes throughout history have demonstrated, the oppressive central planning of social engineers leads to the masses’ losing their sense of autonomy, freedom, dignity, creativity, and strength. Also lost is the incentive to improve one’s own condition and contribute to the progress of society.

If the social engineering of the WEF is successful, then, by 2030, one will not be able to rely on oneself, family members, relatives, friends, or the community. This is because the supporters any absolutist regime want traditions and customs to be corrupted, “memories obliterated, habits destroyed, … liberty, chased from the laws.”

In other words, they want to design a societal order where sympathy and mutual assistance will be rendered obsolete and where every citizen of the world is equally powerless, poor, and isolated, so that people will be unable to oppose the organized strength of global governance and become dependent on governments and their allies for their survival. Eventually, nothing will protect citizens any longer, and citizens will no longer protect themselves.

Social engineers of the WEF are essentially advocating for natural freedom, which would allow the strong to exercise their power while subjugating the weak. In doing so, they are basically calling for the world to move backward in the development of human history toward the reinstitution of feudalism and slavery. It is important to remember that economic freedom, positive freedom, political freedom, freedom of thought, freedom of speech, and freedom of the press are not attributes of primitive man or serfdom; rather, they are products of the most advanced stages of society.

To be more precise, these types of freedom are outcomes of the efforts of countless thinkers, social movements, revolutions, and wars throughout human history. However, social engineers are not interested in the history and struggles of our civilization, as they believe that they possess expertise in all areas, which is the line of thought at the heart of all dictatorial regimes. They do not think that social engineering is alien to the true nature of human beings, even though it is based on “mechanical exactness” and does not “spring from a man’s free choice.” Furthermore, advocates of social engineering ignore the fact that “the progress of mankind, in powers of mind and heart, in well-being and in technique, in law and morality, necessarily involves the participation of the lower classes.”

Anyone who believes that the social engineers of the WEF have noble intentions at heart as they design and implement the Great Reset should heed the warning of President Franklin D. Roosevelt (1935), who (ironically) declared:

The doctrine of regulation and legislation by “master minds” in whose judgment and will all the people may gladly and quietly acquiesce, has been too glaringly apparent at Washington during these last 10 years. Were it possible to find “master minds” so unselfish, so willing to decide unhesitatingly against their own personal interests or private prejudices, men almost godlike in their ability hold the scales of justice with an even hand, such a government might be to the interests of the country; but there are no such on our political horizon, and we cannot expect a complete reversal of all the teachings of history.

We are being gaslit

The “pandemic” has provided an opportunity for a reset. This is our chance to accelerateour pre-pandemic efforts to re-image economic systems that actually address global challenges……Justin Trudeau

The spread of infectious diseases has a unique ability to fuel fear, anxiety and mass hysteria. In so doing, as we have seen, it also challenges our social cohesion and collective capacity to manage a crisis. Epidemics are by nature divisive and traumatizing……Klaus Schwab

…The covid-19 crisis has shown us that our old systems are not fit anymore for the 21st century. It has laid bare the fundamental lack of social cohesion, fairness, inclusion and equality. Now is the historical moment in time, not only to fight the real virus but to share the system for the post-corona era…….Klaus Schwab

Did you vote for him? I never have…….representative republic?

When confronted with it, some industry leaders and senior executives may be tempted to equate the reset with restart, hoping to go back to the old normal and restore what worked in the past: traditions, tested procedures and familiar ways of ding things-in short, a return to business as usual. This won’t happen because it can’t happen. For the most part “business as usual” died from [or at the very least was infected by] COVID-19

Your Guide to The Great Reset

Introduced with clips and excerpts from WEF propaganda James Corbett jumps in at the 10:00 minute mark to focus on 4 main takeaways of the Great Reset.

In pre-Covid times, the world economy was on the verge of another colossal meltdown. Here is a brief chronicle of how the pressure was building up:…….