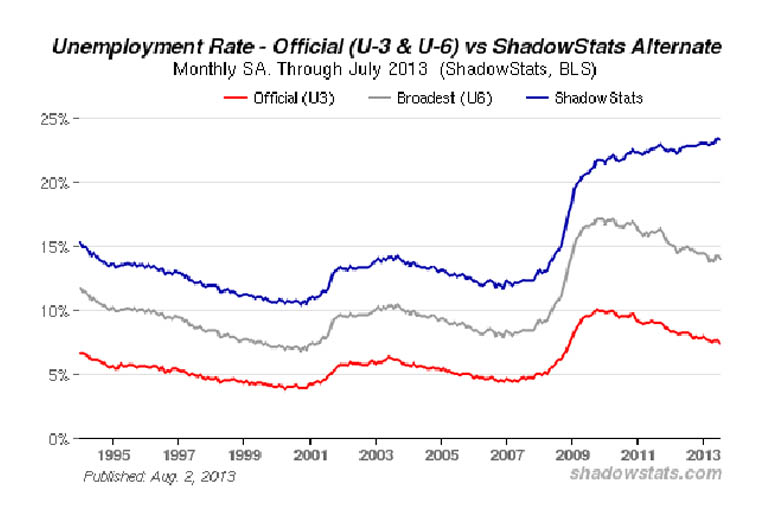 With the release of the July Jobs Report we once again see evidence of massaged formulas to arrive at superficially “better-sounding” results. Of course the MSM soundbites will report the unemployment rate ticked down from 7.6% to 7.4%. Let’s take a closer look and see why.

The July non-farm payroll number came out at 162k missing consensus estimates of about 185k. Also the numbers for the previous two months were revised downward.

The drop in the headline unemployment rate was once again due to an additional 37,000 workers dropping out of the labor force, meaning they’ve given up looking for work. This also means that the Labor Force Participation Rate once again ticked down to 63.4% from 63.5%. This measures the proportion of the country’s working-age population (ages 15 to 64) that is employed.

With the new metric introduced in 1994 for calculating the unemployment rate, those who lost a job and who may now be working a part-time job for as little as 1 hour a week are counted as employed. Also those who have been unemployed longer-term and have given up looking for work are no longer counted.

The “U-6″ unemployment rate, which includes unemployed people, those who are working part-time because they can’t find anything better, and some people who have recently just given up looking for work is now 14%.

So as the general public watches their local or network news, they hear that the unemployment rate has ticked down and may believe that things are getting better. Again, by looking deeper beneath the surface we find that things are not quite what they appear to be.

Just as the government has adjusted the method of calculation for the headline unemployment number, now as the GDP figures have trended downward toward a negative figure they have found it necessary to adjust their formulas so as to result in a more acceptable larger number. Likewise when inflation is computed, they leave out food and energy costs so the resulting number is lower and sounds better. If you shop and fill your gas tank to get to the grocery store you can tell their figures are not accurate. This will be addressed in more detail in subsequent posts.

Please enjoy Peter Schiff’s commentary on the July Report where he covers both jobs and the new GDP methodology. Just to confirm for what it’s worth, I have checked and double-checked the jobs number to be 162K. In the video Peter Schiff quotes it at 163K.

I’ll apologize in advance for the ads on the video as I have no control over them.