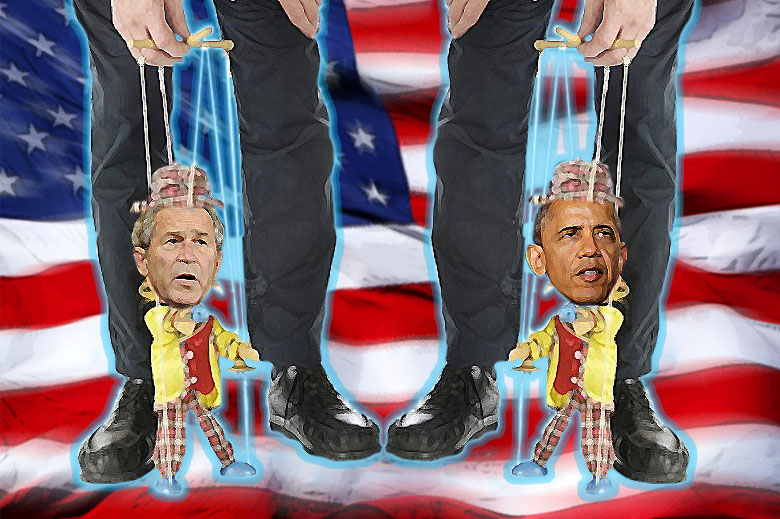 If you can’t see the strings, you’re not paying close enough attention.

A decade ago the United States became engaged in a war with Iraq, unbeknownst to the American people at the time under false pretenses. The invasion of Iraq came as a knee-jerk reaction to the tragic attacks on American soil on September 11, 2001.

The war in Iraq was sold to the American public as a retaliation against Saddam Hussein who was allegedly giving aid and support to the Al-Qaeda terrorists. Saddam was also allegedly in possession of weapons of mass destruction and posed a threat to the security of the American people. Both of these pretexts have been proven to be patently fabricated lies.

Saddam Hussein, who we (US gov.) aided in his fight against Iran had made the mistake of trading his oil in euros. Subsequently, after taking out Saddam Hussein a western central bank was instituted and control of Iraq’s resources was established. Iraqi oil would once again be traded using the US dollar for settlement.

In addition to taking the fight to the terrorists, President Bush presented reasons for an invasion and occupation of Iraq as humanitarian in nature with an effort to “bring democracy” to the people of Iraq freeing them from a dictator who would use chemical weapons on his own people.

Regarding Iraq, declassified documents analyzed by Foreign Policy proved that the U.S. government knew about Saddam Hussein’s egregious use of chemical weapons and in fact we helped him be more effective in their deployment. Unfortunately that’s just the tip of the American chemical weapons iceberg.

Let’s bear this in mind as our Noble Peace Prize winning President attempts to involve us in another unconstitutional war based on the fact that chemical weapons have been used in Syria. Let’s also bear in mind that there has still not been presented any definitive proof linking the use of said weapons directly to the hands of Syrian President Bashar al Assad.

In October 2002, Senator Obama made these remarks opposing the war with Iraq.

“You want a fight, President Bush? Let’s fight to wean ourselves off Middle East oil through an energy policy that doesn’t simply serve the interests of Exxon and Mobil.”

Obama became president on the premise of changing the policies of his predecessor but in many ways has not only continued them but ramped them up. So you have to ask yourself just whose policies are they? Who’s pulling the strings?

President Obama did not seek congressional approval for his military strikes against Libya in 2011. That bombing campaign led to the ouster of longtime dictator Muammar Gadhafi. Gadhafi had been organizing a block of African nations to create a gold-based currency called the Dinar which they intended to use to replace the Dollar in that region.

As part of the vaguely defined ‘War on Terror’ the US has reportedly waged drone strikes outside of Afghanistan where the Taliban once harbored Al-Qaeda. In recent years, those strikes have targeted towns in neighboring Pakistan, as well as Yemen, Somalia and perhaps elsewhere.

Far from solving the problem of extremists in Yemen, however, this US presence in the country seems to be creating more extremism. According to professor Gregory Johnson of Princeton University, an expert on Yemen, the civilian “collateral damage” from US drone strikes on al-Qaeda members actually attracts more al-Qaeda recruits:

“There are strikes that kill civilians. There are strikes that kill women and children. And when you kill people in Yemen, these are people who have families. They have clans. And they have tribes. And what we’re seeing is that the United States might target a particular individual because they see him as a member of al-Qaeda. But what’s happening on the ground is that he’s being defended as a tribesman.”

Circling back to the ‘Chemical Weapons/ Weapons of Mass Destruction’ reasons for US intervention, let’s hope we cannot be so easily led down the same path.

The Iraq War was so messy and costly especially so in human lives.  The best attempt to assess the sheer damage is through numbers.

If it wasn’t such a serious matter it would almost be laughable to watch congressman and senators dance around trying to ‘take a stand’ based on what they may have said during the last administration or how their largest campaign donors would like to have them postured.