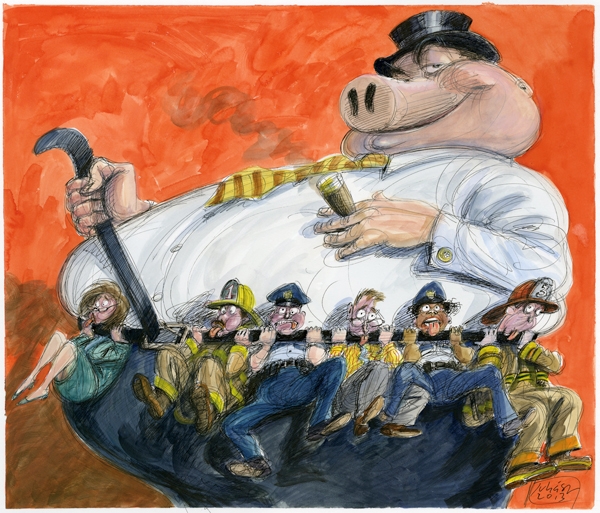 All across America, Wall Street is grabbing money meant for public workers

Five years ago this fall, an epidemic of fraud and thievery in the financial-services industry triggered the collapse of our economy. The resultant loss of tax revenue plunged states everywhere into spiraling fiscal crises, and local governments suffered huge losses in their retirement portfolios – remember, these public pension funds were some of the most frequently targeted suckers upon whom Wall Street dumped its fraud-riddled mortgage-backed securities in the pre-crash years.

Today, the same Wall Street crowd that caused the crash is not merely rolling in money again but aggressively counterattacking on the public-relations front. The battle increasingly centers around public funds like state and municipal pensions. This war isn’t just about money. Crucially, in ways invisible to most Americans, it’s also about blame. In state after state, politicians are following the Rhode Island playbook, using scare tactics and lavishly funded PR campaigns to cast teachers, firefighters and cops – not bankers – as the budget-devouring boogeymen responsible for the mounting fiscal problems of America’s states and cities.

Not only did these middle-class workers already lose huge chunks of retirement money to huckster financiers in the crash, and not only are they now being asked to take the long-term hit for those years of greed and speculative excess, but in many cases they’re also being forced to sit by and watch helplessly as Gordon Gekko wanna-be’s like Loeb or scorched-earth takeover artists like Bain Capital are put in charge of their retirement savings.

It’s a scam of almost unmatchable balls and cruelty, accomplished with the aid of some singularly spineless politicians. And it hasn’t happened overnight. This has been in the works for decades, and the fighting has been dirty all the way.

“This is the third act in an improbable triple-fucking of ordinary people that Wall Street is seeking to pull off as a shocker epilogue to the crisis era.”

There’s $2.6 trillion in state pension money under management in America, and there are a lot of fingers in that pie.

The siege of America’s public-fund money really began nearly 40 years ago, in 1974, when Congress passed the Employee Retirement Income Security Act, or ERISA. In theory, this sweeping regulatory legislation was designed to protect the retirement money of workers with pension plans. But this landmark worker-protection law left open a major loophole: It didn’t cover public pensions. Some states were balking at federal oversight, and lawmakers, naively perhaps, simply never contemplated the possibility of local governments robbing their own workers.

Here’s what this game comes down to. Politicians run for office, promising to deliver law and order, safe and clean streets, and good schools. Then they get elected, and instead of paying for the cops, garbagemen, teachers and firefighters they only just 10 minutes ago promised voters, they intercept taxpayer money allocated for those workers and blow it on other stuff. It’s the governmental equivalent of stealing from your kids’ college fund to buy lap dances.

There’s an arcane but highly disturbing twist to the practice of not paying required contributions into pension funds: The states that engage in this activity may also be committing securities fraud. Why? Because if a city or state hasn’t been making its required contributions, and this hasn’t been made plain to the ratings agencies, then that same city or state is actually concealing what in effect are massive secret loans and is actually far more broke than it is representing to investors when it goes out into the world and borrows money by issuing bonds.

Some states have been caught in the act of doing this, but the penalties have been so meager that the practice can be considered quasi-sanctioned.

A study by noted economist Dean Baker at the Center for Economic Policy and Research in February 2011 reported that, had public pension funds not been invested in the stock market and exposed to mortgage-backed securities, there would be no shortfall at all. He said state pension managers were of course somewhat to blame, but only “insofar as they exercised poor judgment in buying the [finance] industry’s services.”

The “unfunded liability” crisis had nothing to do with the systemic unsustainability of public pensions. Thanks to a deadly combination of unscrupulous states illegally borrowing from their pensioners, and unscrupulous banks whose mass sales of fraudulent toxic subprime products crashed the market, these funds were out some $930 billion. Yet the public was being told that the problem was state workers’ benefits were simply too expensive.

In a way, this was a repeat of a shell game with retirement finance that had been going on at the federal level since the Reagan years. The supposed impending collapse of Social Security, which actually should be running a surplus of trillions of dollars, is now repeated as a simple truth. But Social Security wouldn’t be “collapsing” at all had not three decades of presidents continually burgled the cash in the Social Security trust fund to pay for tax cuts, wars and God knows what else. Same with the alleged insolvencies of state pension programs. The money may not be there, but that’s not because the program is unsustainable: It’s because bankers and politicians stole the money.

The full story can be found on RollingStone.com