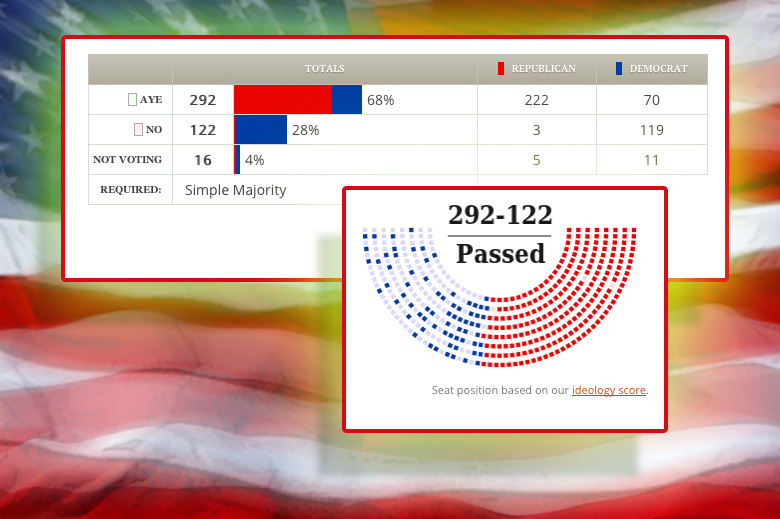 …that was literally written by mega-bank lobbyists. It repeals the laws passed in 2010 to prevent another meltdown like the one that crashed our economy in 2008. The repeal was co-sponsored by a former Goldman Sachs executive and passed with bipartisan support from some of the House’s largest recipients of Wall Street cash. It’s so appalling… so unbelievable… so blatantly corrupt… that you’ve got to see it to believe it!

In 2010, Congress passed the “Dodd-Frank” law to clamp down on risky “derivatives trading” that led to the financial collapse of 2008. Dodd-Frank was weakened by banking lobbyists from the start and has been under attack by those lobbyists ever since. Now a new law written by Citigroup lobbyists  (we couldn’t make this stuff up if we tried) exempts derivatives trading from regulation, and was passed this week by the House of Representatives with broad bipartisan support.

The following video “Something Insane Just Happened in the House” (originally posted on represent.us) while quite entertaining if it wasn’t so blood-boiling breaks it all down very nicely in layman’s terms.

It sounds bad… but don’t worry, it gets much, much worse:

Yep, it’s actually that bad. For the full story, check out this revealing piece by Represent.Us Communications Director Mansur Gidfar. You can also find out if your Rep. voted for H.R.992 here.

We elect Representatives to the House to represent us, the people — but both parties now refuse to do the job we elected them to do. And they won’t until we force them to. The American Anti-Corruption Act would stop this corruption, and Represent.Us is the movement behind the Act. Together, we can make blatant corruption illegal with simple reforms. It’s common sense that elected officials should be barred from collecting money from the industries they regulate.

One thought on “Congress Sells Out To Wall Street, Again!”