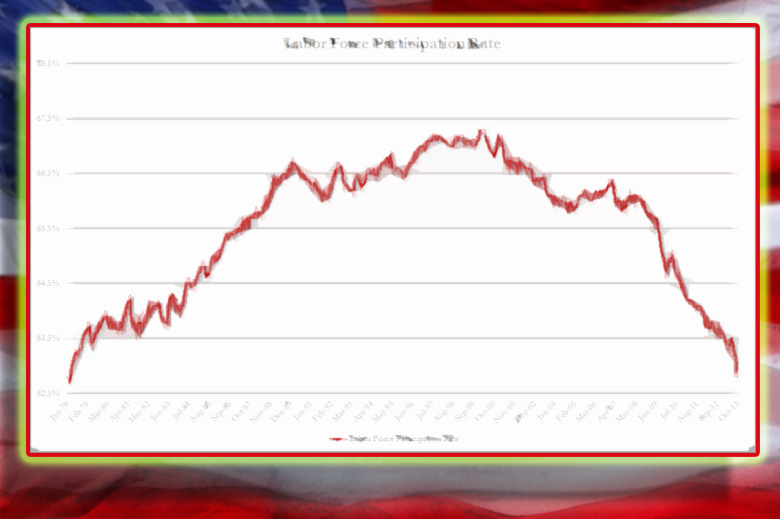 The only two charts that matter from October’s distorted nonfarm payrolls report.

But more importantly, the number of people not in the labor force exploded by nearly 1 million, or 932,000 to be exact, in just the month of October, to a record 91.5 million Americans! This was the third highest monthly increase in people falling out of the labor force in US history.

So the Ministry of Truth (Mainstream Media) was out in full force trumpeting their tale of economic strength with their coverage of the BLS October Jobs Report. The BLS announced the number of jobs created for the month to be 204, 000, doubling the consensus estimates from the experts. So much for expectations or credibility.

Unemployment rate at 7.3%, up from 7.2%. We all know by now that this figure is indeed not a real representation of the real rate of unemployment.

As noted in previous posts; With the new metric introduced in 1994 for calculating the unemployment rate, those who lost a job and who may now be working a part-time job for as little as 1 hour a week are counted as employed. Also those who have been unemployed longer-term and have given up looking for work are no longer counted.

The “U-6″ unemployment rate, which includes unemployed people, those who are working part-time because they can’t find anything better, and some people who have recently just given up looking for work is now  closer to 14%.

Both the number of unemployed persons, at 11.3 million, and the unemployment rate, at 7.3 percent, changed little in October. Among the unemployed, however, the number who reported being on temporary layoff increased by 448,000.

Retail, Hotel And Temp Workers Account For Half Of All October Job Gains

Following the quantity breakdown of jobs in the month which saw the third biggest jump in people not in the labor force in history and a loss of over 600,000 full-time workers (don’t ask how this is possible – not even the BLS knows), next we look at the quality of October jobs. Or lack thereof. Because the top job-gaining sectors were also the worst of all: Leisure and Hospitality; Retail; and Temp Help, namely minimum wage hotel workers and retailers, amounted to roughly half of all job gains.

Here are the industries with the most gains:

But it wasn’t all horrible quality job gains: the manufacturing-starved nation is proud to announce it added 19,000 manufacturing workers in October.

The Labor Force Participation Rate – in English, the percent of the population that is either in a job or looking for a job – has fallen to fresh 35 year lows. This is not a new trend, in fact since the end of 1999 (the dot-com bust) it has continued to trend lower.

There appear to be at least four reasons (excuses) put forth for this dismal ‘structural’ trend but chief among them – and propagandized by most in the mainstream (given its lack of ‘blame’) – is the so-called ‘aging of America’ or demographics. There is only one problem with that ‘myth’; it’s entirely inconsistent with other Western economies who are experiencing exactly the same demographic shift. The collapse in the US labor force is, in fact, due to excess credit having fueled artificial growth for 2 decades; and now a government throwing free money at the population in the form of disability insurance (which has surged) and student loans (which are exponentially exploded). So who (or what) is to blame for the US’ collapsing workforce? Simple, the unintended consequences of government interference.

1. The Aging Of America: Demographics – NO!

4. “Growth” Since The 80s Has Been Credit-Fueled and Artifical And Now We Unwind – YES!

10 American companies cutting the most jobs

Planned job cuts in the third quarter rose 25% from a year ago. With September jobs cuts up 19% from last year, it represented the fourth month in a row in which job cuts were higher than the same month last year. Despite the current trend, employers are on pace to cut roughly the same number of jobs that were cut last year. According to data compiled by Challenger, Gray & Christmas, 10 companies alone have announced close to 75,000 job cuts this year, combined.

A Few Random Points on Employment & the Economy

“In this economy we still have millions of individuals out of work,” says Stacy Dean of the liberal Center on Budget and Policy Priorities. Poverty in America today, she says, is largely a story of unemployed workers or those who must combine their wages with public assistance in order to survive. “It’s either that the wages or the hours are insufficient in order to be a living income.”

As to why these jobs “gains” are in fact a net drag on the economy the Wall Street Journal shows just how much public benefits workers in the above mentioned “fast growing” industries get courtesy of the government.

Applications for mortgages for the purchase of a home plunged at nearly the fastest pace in 9 months this week, dropping to their lowest since the Christmas week 2012 – and lowest since February 2012. Now down over 20% from their May highs, the plunge is a problem.

In case the world needed any additional proof that the latest housing bubble (not our words, Fitch’s) was on its last legs, it came earlier today from Credit Suisse’ Dan Oppenheim who in his monthly survey of real estate agents observed that October was “another weak month” for traffic, with “pricing power fading as sluggish demand persists.”

This naturally focuses on the increasingly smaller component of buyers who buy for the sake of owning and living in a home instead of flipping it to another greater fool (preferably from China or Russia, just looking to park their stolen cash  abroad).

The numbers have been falling (or plunging) despite the incessant rise of US equities.