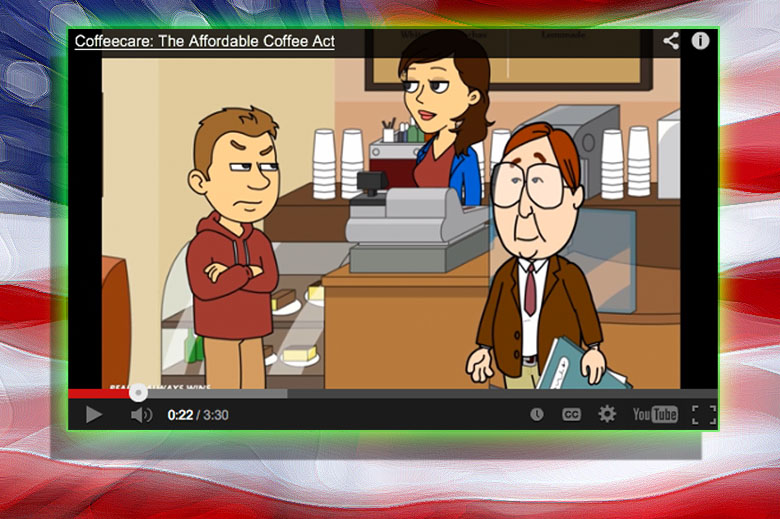 As first pointed out in a previous post : Obamacare:The Rule of Law or Lawlessness (complete with School House Rock videos)

Once a bill is signed into law it becomes the Law of the Land.

The President or anyone else for that matter cannot just go back and make changes and exemptions at will. This has been the case ever since this law’s passage and especially since the premature launch of Healthcare.gov. To make changes, a law needs to go back to Congress to be amended or struck down. The president has been making changes, granting exemptions and basically moving the goalposts in response to blowback. Is there anyone who will stand up to this abuse of his executive authority?

The animated video below will point out some of the ridiculous and ludicrous details of Obamacare. So funny you will laugh until you cry.

As the economic consequences of the Affordable Care Act incrementally surface, more and more politicians who played a role in its passage are trying to turn their backs and disassociate themselves from it, ever more-so as we draw closer to mid-term elections. Doesn’t that just underline their priorities and whose interests they serve? At least it underscores who’s interest they do not serve.

In order to avoid responsibility and blame for even more negative effects of Obamacare, he’s at it again issuing another delay. In what can only been seen (by those really paying attention) as a move made again for political motivations rather than having anything to do with the interests of the People “The Obama administration is set to announce another major delay in implementing the Affordable Care Act, easing election pressure on Democrats.”

As early as this week, according to two sources, the White House will announce a new directive allowing insurers to continue offering health plans that do not meet ObamaCare’s minimum coverage requirements.

Prolonging the “keep your plan” fix will avoid another wave of health policy cancellations otherwise expected this fall.

The cancellations would have created a firestorm for Democratic candidates in the last, crucial weeks before Election Day.

The White House is intent on protecting its allies in the Senate, where Democrats face a battle to keep control of the chamber.

“I don’t see how they could have a bunch of these announcements going out in September,” one consultant in the health insurance industry said. “Not when they’re trying to defend the Senate and keep their losses at a minimum in the House. This is not something to have out there right before the election.”

Late last year, the administration was grappling with the beleaguered HealthCare.gov and millions of canceled health plans in the individual market.

A one-year moratorium pushed the deadline beyond the midterm election, but insurers must send out cancellation notices 90 days in advance. That would mean notices in the mail by Oct. 1, five weeks before voters go to the polls.

The administration’s decision to pursue another extension was confirmed by insurance sources who predicted a public announcement would be “imminent.” It is unclear how long the extension will be, though one source believed it could last to the end of Obama’s second term, and perhaps beyond.

The following video uses some sharp humor to point out the illogical underpinnings of Obamacare.

It seems like a bad joke, but does in fact refer to actual quotes from the healthcare.gov website. Please see the source for more details.

Here’s a hint.  It really isn’t about healthcare…..it’s about money.(and much needed revenue)
Specifically money from you to be redistributed to someone else.

The new health insurance marketplaces appear to be making little headway in signing up Americans who lack insurance, the Affordable Care Act’s central goal, according to a pair of new surveys.

Only one in 10 uninsured people who qualify for private plans through the new marketplaces enrolled as of last month, one of the surveys shows. The other found that about half of uninsured adults have looked for information on the online exchanges or planned to look.

The findings emerge as the Obama administration has been revising a series of rules that define how the 2010 law works in practice. According to a variety of health-policy experts who support and oppose the law, the changes are in response to consumer hesitancy and political opposition that linger — at least, in the early going — as the law’s major provisions have taken effect.

The rule changes have postponed or relaxed aspects of the law, sometimes to adjust for technical problems, other times to push into the future controversies that have arisen from specific groups of consumers or parts of the health-care industry.

One thought on “Obamacare : An Abomination – More Fodder”