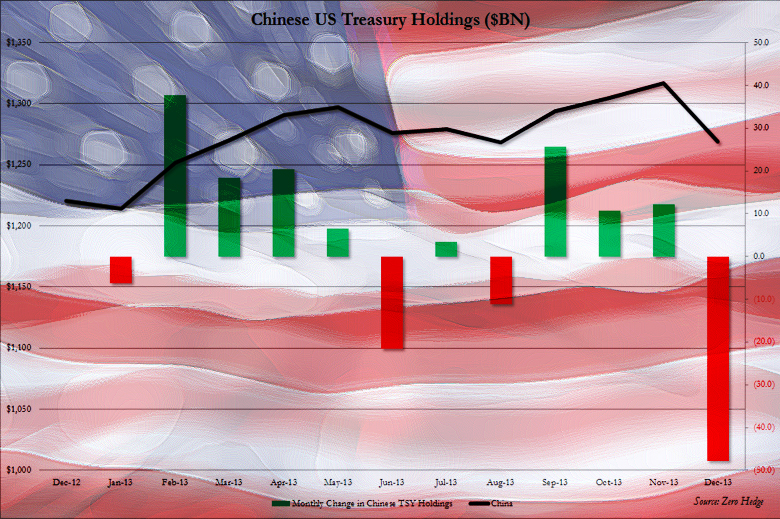 As the effectiveness of the Fed’s Quantitative Easing fades, weakening its ability to buoy the markets and foster the illusion of a recovery it must maintain the taper in order to save face. As more and more data starts to poke holes in the recovery story, the writing is on the wall. The Dollar’s dominance is a house of cards. Those pulling the strings are aware of this and do not want to be blamed as the mathematic certainty plays itself out and the cards start to fall.

A new war or false flag of some sort is just the cover needed for the reset that is coming. Having not been successful in getting the war started in Syria, attention has been shifted to Ukraine.

We all know by now, hopefully, that the events in Ukraine were moved along with help from the west and it’s banking interests, from the paid militants and snipers to the installed puppet technocrat banker as the new “Prime Minister”.

Please see the previous posts for more on Ukraine:

The situation in Ukraine is starting to look like an act of desperation by those trying to maintain the Dollar’s standing. But could this desperation end up backfiring?

The video interview at the end of this post will shed some light on the Fed and its potential scapegoating. For now, back to the threat of sanctions.

Kerry Lands In Kiev, Sanctions Against Russia “In Matter Of Days”, US Prepares $1 Billion Loan For Ukraine

While the world digests the recent Putin press conference in which he appeared to superficially soften his stance on the Ukraine, US SecState John Kerry lands in Kiev while the state department announced that sanctions against Russia are “coming in a matter of days”, and as the US announces it is preparing a $1 billion aid package for the Ukraine, which despite the toned down rhetoric by Putin just lost the Gazprom discount for natgas due to non-payment meaning its reserves will be depleted even faster, suggesting a far greater urgency to providing funding for the Ukraine in what some have said is now a fight between Putin and the IMF, as the latter tries to drain what little funds remain in the nation, while the former urgently seeks to keep it afloat.

Here is how the WSJ lays out the itinerary:

And below the story was an interesting comment, which lead to a Google Translation of a Russian-language publication. Here’s the comment:

And the translated article:

Adviser to Putin: Russia in the case of sanctions against it abandon the dollar

MOSCOW, March 4 – RIA Novosti. Russia in the case of sanctions by the U.S. Senate will be forced to go into other currencies, create a cash-payment system, said Tuesday in an interview with RIA Novosti Presidential Aide Sergei Glazyev.

“We will have to go into other currencies, create a cash-payment system. We have excellent trade relations with our partners in the East and the South, and we will find a way to not only reset our financial dependence on the U.S., but will come out of these sanctions with great advantage. Trying to announce sanctions against Russia will turn to the collapse of the U.S. financial system, which will entail termination of U.S. dominance in the global financial system. If sanctions are applied against state structures, we will be forced to actually recognize the impossibility of return of those loans that were given to the Russian structures by U.S. banks. Indeed sanctions – a double-edged weapon, and if the United States were frozen our assets, that, accordingly, liabilities of our organizations in the U.S. will also be frozen. This means that our banks and businesses will not return U.S. Loans partners “, – said the eye.

In the case of freezing the U.S. accounts of Russian companies and individuals the Russian authorities will recommend to everyone to sell U.S. government bonds, Advisor to the President stressed.

“The Americans threaten Russia with sanctions and involve the EU in economic and trade war with Russia. Regarding the possible effects of these sanctions can say the following: most of sanctions against Russia will suffer the U.S. itself, because if we talk about trade relations with America, we did them not depend. Treasuries We keep a decent amount – more than $ 200 billion, and if the United States against us dare to apply sanctions to freeze accounts of Russian enterprises and citizens, we can no longer view America as a reliable partner and we encourage all to dump U.S. Treasuries , dump the dollar as the currency in which we can not be sure and leave the U.S. market. “

Economic sanctions by the EU and turn into an economic disaster for Europe, convinced his eyes.

“If we talk about economic sanctions from the EU, for them it does turn into an economic disaster since the cessation of Russian gas supplies can not be compensated for the foreseeable future, this will mean an increase in energy prices in Europe, which is beneficial to Americans. U.S. specifically pushing EU for sanctions against the Russian Federation, to the vacant niche on Russian gas to send its gas, which they now extract shale deposits. I think our economy is going to be very good momentum – do diversification, enhancement of processing and do their own self-sufficient financial system, which would be the main sources of credit would not be external loans and internal sources of credit. ”

A senior source in the Kremlin, meanwhile, said that the comments Glazev on financial relations between Russia and the U.S. – it is his personal opinion, which does not match the position of the Kremlin. Interlocutor of the agency added that the eye, apparently gave his version as an academic, not as a presidential adviser.

That said, putting Russia’s threat in context, the Federation held $138.6 billion in US Treasurys as of December according to the latest TIC data, making it the 11th largest creditor of the US, which appears to conflict with what the Russian said, making one wonder where there is a disconnect in “data.” This would mean the Fed would need just two months of POMO to gobble up whatever bonds Russia has to sell.

The bigger question is if indeed, as some have suggested, China were to ally with Russia, and proceed to follow Russia in its reciprocal isolation of the US, by expanding trade with Russia on non-USD based terms, and also continue selling bonds as it did in December, when it dumped the second largest amount of US paper in history.

China Sold Second-Largest Amount Ever Of US Treasurys In December: And Guess Who Comes To The Rescue

Chinese Treasury holdings plunged by the most in two years, after China offloaded some $48 billion in paper, bringing its total to only $1268.9 billion, down from $1316.7 billion, and back to a level last seen in March 2013!

China had gobs of spare cash lying around and not investing in US paper should be quite troubling to anyone who follows the nuanced game theory between the US and its largest external creditor, and the signals China sends to the world when it comes to its confidence in the US.

Yet what was truly surprising is that despite the plunge in Chinese holdings, and Japanese holdings which also dropped by $4 billion in December, is that total foreign holdings of US Treasurys increased in December, from $5716.9 billion to 5794.9 billion.

Why? Because of this country. Guess which one it is without looking at legend.

That’s right: at a time when America’s two largest foreign creditors, China and Japan, went on a buyers strike, the entity that came to the US rescue was Belgium, (Brussels is basically the EU) which as most know is simply another name for… Europe: the continent that has just a modest amount of its own excess debt to worry about. One wonders what favors were (and are) being exchanged behind the scenes in order to preserve the semblance that “all is well”?

Economic and political writer Brandon Smith of alt-market.com thinks America is in deep financial trouble, and the Fed knows it.

“I find it interesting the Federal Reserve institutes the ‘taper’ just before we saw major downturns in global manufacturing.  The Baltic Dry Index is starting to crash again.  We’re starting to see trouble in emerging market currencies.  You could say that maybe that’s coincidence that the Federal Reserve started the ‘taper’ before those negative indicators started to become visible.  I don’t think that was a coincidence.  I think they knew that those negative indicators were coming, and the Fed is insulating itself using the ‘taper’ concept.

Could Sanctions Against Russia Backfire and Spark Global Economic Reset?

3 thoughts on “Could Sanctions Against Russia Backfire?”