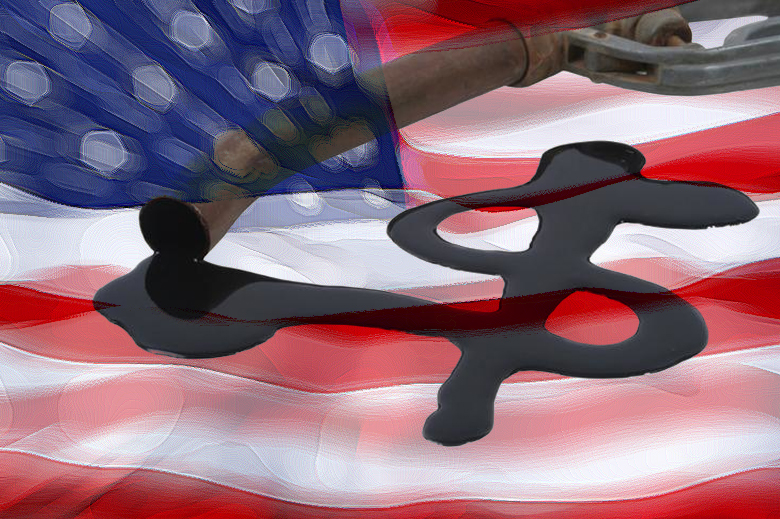 As touched on in previous posts, presently the US Dollar holds its status as the world’s reserve currency  backed by nothing more than faith…. (& the US Military) More on the Timeline of the US Dollar.

For decades the US has been able to live beyond its means by issuing debt and having foreign nations hold the IOU’s.  However, there IS a shift underway.

A deeper look into US foreign affairs of recent times will easily glean insight. We see that the mission to “spread Democracy” around the globe takes place mostly in countries who attempt to bypass the Petro-Dollar system. Iraq and Libya for example had both been setting up alternative settlement systems for the sale of their resources. Iran sits on 30% of the world’s underground oil reserves. For nearly 30 years the story has been that they are a threat and only months away from developing nuclear weapons. Syria is seen as a gateway into Iran. The US has been supporting insurgents in Syria (with proven links to Al-Queda) to overthrow the Assad regime for some time now.

With recent events in Ukraine (covered in several previous posts) we find the US/EU support of the government overthrow in that strategic region as well.

All of these developments point to a shift in the  Global Financial system that is indeed underway. Sadly, this story is not presented in the Mainstream Media.

In the interview below, Dr. Jim Willie contends that most American will not even comprehend the question if asked about the “Petro-Dollar”.

Of all the financial experts I have come across in my diligent quest for answers and truth, one of the sharpest by far is Dr. Jim Willie. Dr. Willie has a phd in statistics from Carnegie Mellon University and he is the editor of the financial newsletter The Hat Trick Letter that can be found on his web-site GoldenJackass.com.

Dr. Willie has various inside sources in very high levels of international finance. His analysis and forecasts are not only insightful but stunningly accurate.

The following interview with Paul Sandhu will be a jaw-dropping eye-opener if you are new to this information. Key Points Include:

This is two hours of must-hear Insight and breakdown. If you care to know what is really going on in the Global Economy and Financial System Dr.Jim WIllie lays it all out here.

After the interview, see the recent headlines & developments that support the points Dr. Willie has presented.

If it was the intent of the West to bring Russia and China together – one a natural resource (if “somewhat” corrupt) superpower and the other a fixed capital/labor output (if “somewhat” capital misallocating and credit bubble-blowing) powerhouse – in the process marginalizing the dollar and encouraging Ruble and Renminbi bilateral trade, then things are surely “going according to plan.”

For now there have been no major developments as a result of the shift in the geopolitical axis that has seen global US influence, away from the Group of 7 (most insolvent nations) of course, decline precipitously in the aftermath of the bungled Syrian intervention attempt and the bloodless Russian annexation of Crimea, but that will soon change. Because while the west is focused on day to day developments in Ukraine, and how to halt Russian expansion through appeasement (hardly a winning tactic as events in the 1930s demonstrated), Russia is once again thinking 3 steps ahead… and quite a few steps east.

While Europe is furiously scrambling to find alternative sources of energy should Gazprom pull the plug on natgas exports to Germany and Europe (the imminent surge in Ukraine gas prices by 40% is probably the best indication of what the outcome would be), Russia is preparing the announcement of the “Holy Grail” energy deal with none other than China, a move which would send geopolitical shockwaves around the world and bind the two nations in a commodity-backed axis. One which, as some especially on these pages, have suggested would lay the groundwork for a new joint, commodity-backed reserve currency that bypasses the dollar, something which Russia implied moments ago when its finance minister Siluanov said that Russia may refrain from foreign borrowing this year. Translated: bypass western purchases of Russian debt, funded by Chinese purchases of US Treasurys, and go straight to the source.

“And as if pushing Russia into the warm embrace of the world’s most populous nation was not enough, there is also the second most populated country in the world, India.”

Rosneft, the world’s top listed oil producer by output, may join forces with Indian state-run Oil and Natural Gas Corp to supply oil to India over the long term.

Rosneft CEO Igor Sechin, an ally of President Vladimir Putin, travelled to India on Sunday, part of a wider Asian trip to shore up ties with eastern allies at a time when Moscow is being shunned by the West over its annexation of Crimea.

With EU nations threatening to cut their reliance on Russian oil and gas, Russian officials have started to look East.

Rosneft said it had also agreed with ONGC they may join forces in Rosneft’s yet-to-be built liquefied natural gas plant in the far east of Russia to the benefit of Indian consumers.

We just have one question: will payment for crude and LNG be made in Rubles or Rupees? Or in gold. Because it certainly won’t be in dollars.

What About The Dollar: Russia, Iran Announce $20 Billion Oil-For-Goods Deal

Spot what is missing in the just blasted headline from Bloomberg:

If you said the complete absence of US Dollars anywhere in the funds flow you are correct. Which is precisely what we have been warning would happen the more the West and/or JPMorgan pushed Russia into a USD-free corner.

Iran and Russia have made progress towards an oil-for-goods deal sources said would be worth up to $20 billion, which would enable Tehran to boost vital energy exports in defiance of Western sanctions, people familiar with the negotiations told Reuters.

In January Reuters reported Moscow and Tehran were discussing a barter deal that would see Moscow buy up to 500,000 barrels a day of Iranian oil in exchange for Russian equipment and goods.

The White House has said such a deal would raise “serious concerns” and would be inconsistent with the nuclear talks between world powers and Iran.

A Russian source said Moscow had “prepared all documents from its side”, adding that completion of a deal was awaiting agreement on what oil price to lock in.

The source said the two sides were looking at a barter arrangement that would see Iranian oil being exchanged for industrial goods including metals and food, but said there was no military equipment involved. The source added that the deal was expected to reach $15 to $20 billion in total and would be done in stages with an initial $6 billion to $8 billion tranche.

US Threatens Russia Over Petrodollar-Busting Deal

We suspect these sanctions would have more teeth than some travel bans, but, as we noted previously, it is just as likely to be another epic geopolitical debacle resulting from what was originally intended to be a demonstration of strength and instead is rapidly turning out into a terminal confirmation of weakness.

And here is Voice of Russia, “Russia prepares to attack the Petrodollar“:

The US dollar’s position as the base currency for global energy trading gives the US a number of unfair advantages. It seems that Moscow is ready to take those advantages away.

The existence of “petrodollars” is one of the pillars of America’s economic might because it creates a significant external demand for American currency, allowing the US to accumulate enormous debts without defaulting. If a Japanese buyer want to buy a barrel of Saudi oil, he has to pay in dollars even if no American oil company ever touches the said barrel. Dollar has held a dominant position in global trading for such a long time that even Gazprom’s natural gas contracts for Europe are priced and paid for in US dollars. Until recently, a significant part of EU-China trade had been priced in dollars.

Lately, China has led the BRICS efforts to dislodge the dollar from its position as the main global currency, but the “sanctions war” between Washington and Moscow gave an impetus to the long-awaited scheme to launch the petroruble and switch all Russian energy exports away from the US currency .