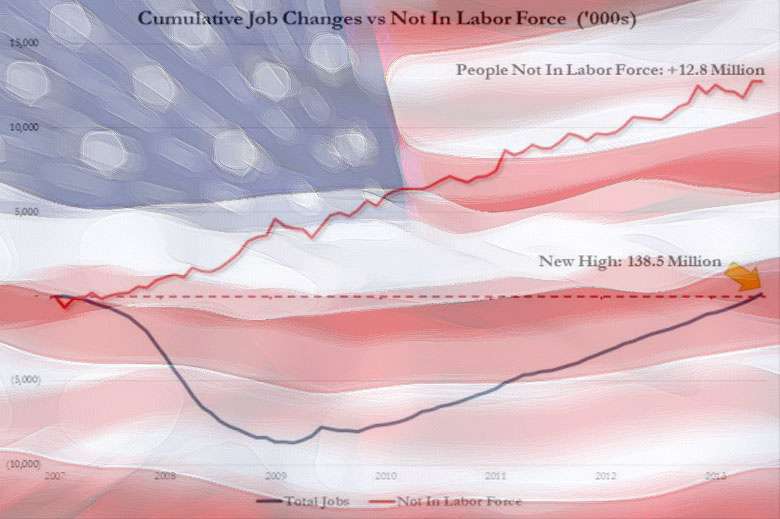 In George Orwell’s 1984, the Ministry of Truth is diligent in constructing and constantly reworking their version of reality to feed to the people.

In the Soviet Union there were two state-sponsored newspapers: The Truth and The News. It was said that “there was no truth in the news and there was no news in the truth”. The people of the Soviet Union for the most part were well aware that the purpose of these outlets was to feed them propaganda that favored the State and it’s version of reality.

It seems that most Americans accept the stream of propaganda they are fed by the mainstream media. If you open your eyes and really look it is not hard to find the truth. Most do not bother. They simply swallow the headlines and soundbites they are fed without question. They remain entertained and distracted on a treadmill.

US Finally Recovers All Jobs Lost Since 2007
While People Not In Labor Force Increase By 12.8 Million

Pundits may be trying to spin this Friday’s jobs report as indicative of an ongoing recovery, emphasizing that as of May, all the jobs that were lost since December 2007 have now been recovered, or the chart below…

However the same pundits fail to mention is that while it took the Fed some $2.7 trillion in incremental liquidity to regain all the lost jobs (and concurrently push the S&P to absolutely ridiculous record numbers), at the same time the US population, which grew by 14.8 million since December 2007, has lost a record 12.8 million people form the labor force, which remains at an all time high 92 million!

There was good news in today’s NFP report: at 138,463K jobs reported by the establishment survey, the US economy has finally not only recovered the prior cyclical high of 138,365K, but surpassed it by 98K. Congratulations.

And now the bad news (reality).

As the next chart shows, that virtually every job gaines since the trough of the depression has been matched by at least one person dropping out of the labor force. In fact, since December 2007, the total number of jobs is virtually unchanged, while the number of people not in the labor force has increased by an unprecedented 12.8 million from 79.2 million to a record 92 million. Recovery?

All of this and much more is quite nicely encapsulated in this latest (must-watch) video of Greg Hunter’s Weekly News Wrap-Up.

The top story is the global economy.  It’s not fixed and there is no real recovery. Yes, I know the stock market hit all-time highs again, but that’s because the market believes the Fed; and now the European Central Bank will continue the easy money policies.  The ECB just announced it will go to negative interest rates of -.1% on deposits. That’s right.  In, Europe you have to pay a bank to hold your money!

Retail and housing numbers have rolled over–they are not “mixed.”  They have tanked.  10 million homeowners still have negative equity in their homes.  Despite a near 4% 30-year mortgage rate, home prices, according to one new report, are still falling.  With this low rate, home sales should be taking off like a rocket—they are not.

You want proof the economy is tanking?  This is a wire story that came out the same day, and it reads “Hiring slowed by U.S. Firms in May.”  Payroll processor ADP is reporting private companies are hiring less people.  Wouldn’t it be increasing if there was a recovery?  How about the nearly 50 million people on food stamps? What about the more than 90 million people no longer in the workforce? There are record numbers of people on food stamps—nearly 50 million.

• more from Greg Hunter at usawatchdog.com

Democratic strategists have made a blunt declaration in an election-year memo, according to AP, “Don’t talk about the economic recovery. It’s a political loser.” Stan Greenberg, James Carville and others wrote that in head-to-head polling tests the mere mention of the word “recovery” is trumped by a Republican assertion that the Obama administration has had six years to get the economy moving and its policies haven’t worked. But, but, but… stocks are at all-time highs?