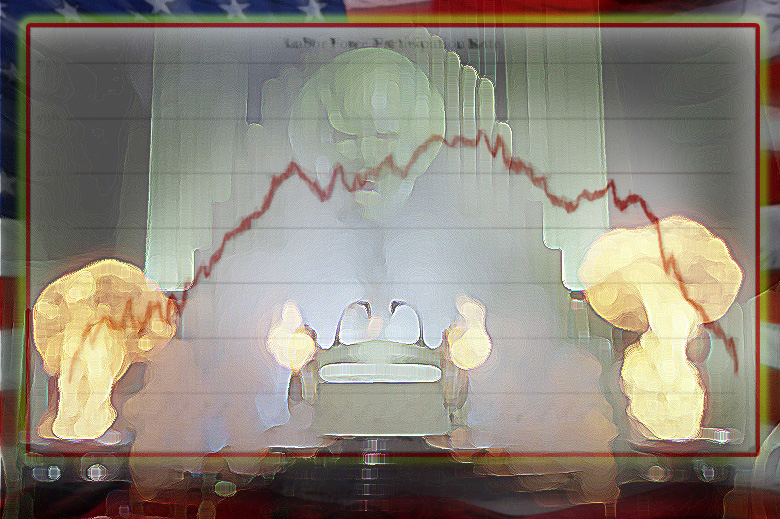 US Economy Shrank By 1% In The First Quarter: First Contraction Since 2011

And this was the news of the day, that as one would expect goes mostly ignored. What is completely ignored by the talking heads in the mainstream media, especially those on CNBC, who may as well use a bullhorn and pom-poms as they cheer on this unRecovery Tale is the fact that any numbers being discussed pertaining to GDP are results of the New & Improved Formula rolled out a few months ago. The new Hokus-Pokus formula has been contrived to make the resulting numbers appear larger so as not to alarm the masses to the truth. This is a similar to the new technique used to arrive at the announced unemployment rate. Sadly most people do not take notice.

These manipulations have been covered at length in many previous posts, such as: The October 2012 Pre-Election Jobs Report Was Faked

So back to the GDP flop. Analysts were initially forecasting 3-4% growth into 2014. The first quarter number after using the new pumped-up formula came in at 0.1%. Like always that number has been revised. This time it was revised down even further to -1%. Yes, NEGATIVE 1%. That means a contraction, even despite the rose-colored calculations.

Our “Make It Look Good” Economy Has Failed

from Charles Hugh Smith of OfTwoMinds.com

When rigged numbers are the basis of our success, we have failed.

The essence of the U.S. economy is make it look good: never mind quality or long-term consequences, just make it look good today, this week, this month, this quarter: make the pink slime look like meat, make the company look profitable, make the low-quality product look good enough to close the sale, make the unemployment rate low enough to justify re-electing the toadies currently in power, make the body count of bad guys look good, and on and on–just makes the numbers look good now, the future will take care of itself.

This is, of course, an attractive lie: the future is a direct consequence of present decisions and actions. It is remarkable how quickly we latch onto the notion that an endless parade of lies, manipulations and deceptions will magically produce a warm and fuzzy future of organic growth fostered by sound investments.

Alas, an economy that relies on an endless parade of lies, manipulations and deceptions has only one possible future: failure–abject, total, undeniable, devastating. Equally remarkable is the current conviction that absurd extremes in manipulation–the billions of dollars of corporate buybacks pushing stocks higher, the socialization of the U.S. mortgage market, where privately issued mortgages (unbacked by government guarantees) have virtually vanished, the ginned-up unemployment number (remove enough potential workers from the count and the unemployment rate is soon near-zero)–will magically lead to an economy that no longer needs extreme manipulations to sustain itself.

All these lies (if we are bold enough to call a lie a lie) and manipulations cannot possibly herald in an economy of honest reporting, market discovery of price and sound investments.

This is equivalent to doing nothing but eating junk food while playing martial-arts videogames for months on end and then expecting to beat Tony Jaa in a real-world sparring match.

America is completely out of touch with reality. Gaming statistics and making credit free to financiers doesn’t create jobs.

The misguided individual who reckons that foisting make it look good cons will magically create productive investments soon discovers that cons, lies and manipulations are all one-way streets:a make it look good con has only one future: a bigger con, to cover up the disastrous consequences of the initial con.

Liars often entertain the fantasy that the initial make it look good illusion can eventually be replaced with real numbers and real integrity: but that too is a lie, a lie the liar tells himself. A house of cards constructed of lies, manipulations, fudged numbers, ginned-up statistics and cleverly constructed deceptions cannot suddenly become a structure built on integrity, accountability and honest reporting of facts; it will always be fragile, for a single truth and a single unvarnished fact can bring down the entire contraption.

Officially sanctioned lies, manipulations and deceptions erode trust in institutions and the bedrock belief that honesty, integrity, accountability, hard work and productive investments are the keys to advancement.

Once a people have been trained to swallow an endless parade of lies, manipulations and deceptions in order to get their share of the system’s swag, they lose the ability to practice accountability, integrity and honesty. Their own complicity renders them incapable of trusting the system or anyone else playing the make it look good game.

Eventually they lose the ability to even recognize accountability, integrity and honesty, much less live them.

America’s economy has already failed. It failed when our leaders turned to lies and manipulation to make it look good, and it failed when we bought the lies because it was so much less risky than demanding a factual accounting.

When rigged numbers are the basis of our success, we have failed.

One supremely smart CNBC talking head summed it all up, “today’s negative GDP number was excellent news,” and sure enough, thanks to someone’s multi-billion-dollar bid at the all-time-highs mid-afternoon, we went to the moon, Alice.

Excluding Obamacare, US Economy Contracted By 2% In The First Quarter

As if the official news that the US economy is just one quarter away from an official recession (and with just one month left in the second quarter that inventory restocking better be progressing at an epic pace) but don’t worry – supposedly harsh weather somehow managed to wipe out $100 billion in economic growth from the initial forecast for Q1 GDP – here is some even worse news: if one excludes the artificial stimulus to the US economy generated from the Obamacare Q1 taxpayer-subsidized scramble, which resulted in a record surge in Healthcare services spending of $40 billion in the quarter, Q1 GDP would have contracted not by 1% but by 2%!

Governments will go to any lengths to make things appear better, first it was Italy pumping up it’s GDP numbers to ensure more loans and indebtedness to the ECB, now Britain is following suit:

First it was Italy which, as we reported last week, had decided to “boost” its GDP by adding the estimated impact of cocaine and hookers. And now, riding on the coattails of this economics gimmick designed solely to make the economy appear more solvent, it is Britain’s turn, whose Office for National Statistics will also add add up the “contribution” made by prostitutes and drug dealers.

The Jobs Report Isn’t as Good as It Looks

Rarely does a monthly report on the United States job market look so terrific on the surface while being so disappointing underneath.

At first glance, the new reading on the nation’s employment situation is shout-from-the-roof-tops, pop-the-Champagne fantastic. The unemployment rate fell to 6.3 percent from 6.7 percent, and employers added a whopping 288,000 jobs, the most in two years.

The details of the April job report, though, threw serious cold water on that proposition. The number of people in the labor force fell by a whopping 806,000, wiping out the February and March gains and a bit of January as well. The labor force participation rate fell by 0.4 percentage points to 62.8 percent, returning to its December level.

And the number of people reporting they were unemployed fell by 733,000, which sounds good on its surface, but paired with the similar-sized decline in the labor force points to job seekers giving up looking rather than finding new employment.

Economy Not Keeping Up With Population Growth

8 million added to working population, half a million fewer jobs

Despite adding more than 8 million people to the working-age population since 2007, total employment has declined by half a million.

Before President Barack Obama took office 259.7 million people were part of the working-age population, or between ages 16 and 65.  Now, the number has risen to 267.7 million.

“This statistic highlights an alarming trend that has embodied the president’s economic policies: more and more people are leaving the workforce entirely,”

More Than 92 Million Americans Remain Out Of Labor Force

The unemployment rate dropped to 6.3 percent in April from 6.7 percent in March. The sharp drop, though, occurred because the number of people working or seeking work fell. The Bureau of Labor Statistics does not count people not looking for a job as unemployed.

BLS: In 20% of American Families, No One Works

In 20 percent of American families in 2013, according to new data released by the Bureau of Labor Statistics (BLS), not one member of the family worked.

NSA whistleblower Edward Snowden was interview by NBC’s Brian Williams this week.  In a nutshell, Snowden said he exposed the NSA spying because of big violations of the U.S. Constitution. Secretary of State John Kerry called Snowden a “coward” and a “traitor.”

The NDAA allows for the government to detain anyone indefinitely without charge or trial.

I wish John Kerry would get this upset when big banks launder money for countries on the State Department terror list.  In the latest “fine and no jail time” world we live in, the Justice Department is going to fine BNP Paribas Bank $10 billion for doing business with Sudan and Iran.  These countries are considered State Sponsors of Terrorism–in short, terrorists.  Isn’t that treason?

Snowden is a traitor for disclosing we were tapping the phones of our allies and spying on all Americans? Laundering money for terror countries just gets a fine that is paid for by shareholders?  How stupid or scared is the national press?  Why don’t these so-called reporters ask this question next time Jay Carney is in the White House Briefing Room?  Don’t hold your breath; our national media is a disgusting bunch of sell-outs.

• more from Greg Hunter at usawatchdog.com