June Full-Time Jobs Plunge By Over Half A Million, Part-Time Jobs Surge By 800K, Most Since 1993 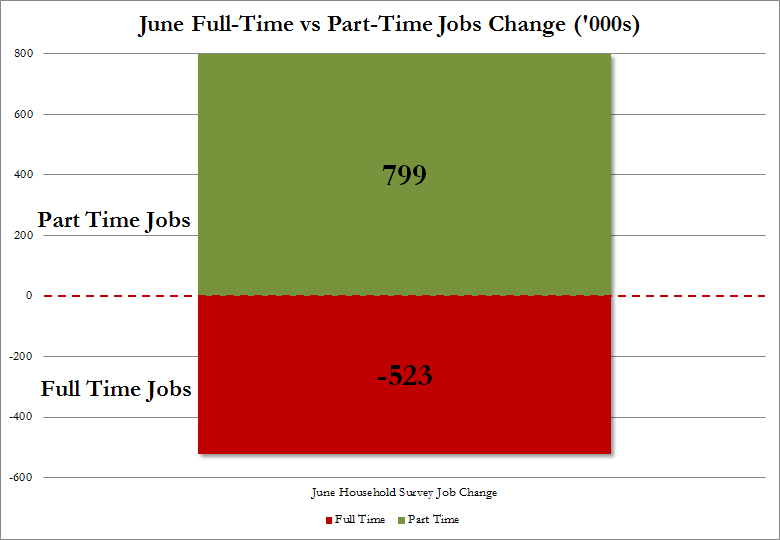 Is this the reason for the blowout, on the surface, payroll number? In June the BLS reports that the number of full-time jobs tumbled by 523K to 118.2 million while part-time jobs soared by 799K to over 28 million!

Looking at the breakdown of full and part-time jobs so far in 2014, we find that 926K full-time jobs were added to the US economy. The offset: 646K part-time jobs.

Something tells us that the fact that the BLS just reported June part-time jobs rose by just shy of 800,000 the biggest monthly jump since 1993, will hardly get much airplay today. Because remember: when it comes to jobs, it is only the quantity that matters, never the quality.

The reason why the unemployment rate took another big step lower from 6.3% to 6.1%, was once again as a result of the number of people not in the labor force, which in June rose to a fresh record high of 92,120K, up 111K from June.

The number of Americans 16 and older who did not participate in the labor force climbed to a record high of 92,120,000 in June, according to data from the Bureau of Labor Statistics (BLS).

This means that there were 92,120,000 Americans 16 and older who not only did not have a job, but did not actively seek one in the last four weeks.

So this is how the announced unemployment rate has dropped to 6.1%. Simply put, if you have not been on an interview in the past four weeks you are no longer counted. And on the other side of the coin, if you had lost your full-time job and are now working two part-time jobs……well those are two jobs created.

The recent hiring spurt—one of the best stretches since the late 1990s—has gotten a surprising lift by a major sector: government.

One thought on “June Full-Time Jobs Plunge By Over Half A Million, Part-Time Jobs Surge By 800K, Most Since 1993”

Leave a Reply to What’s Lurking Beneath The Glossy Veneer Of The Jobs Report? | Concerned American Dad Cancel reply