What’s Lurking Beneath The Glossy Veneer Of The Jobs Report? 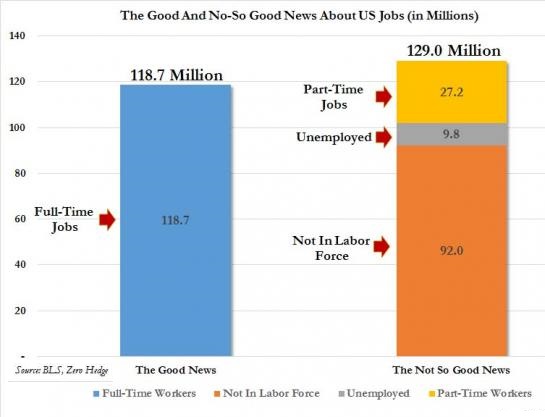 The jobs report has little value if we don’t peer beneath the glossy veneer.

Beneath the glossy veneer, however, the news wasn’t quite as good as advertised: full-time jobs declined by 523,000 and part-time jobs surged 840,000.

As a follow-up to my last post: June Full-Time Jobs Plunge By Over Half A Million, Part-Time Jobs Surge By 800K, Most Since 1993, The chart above should tell you all you need to know about the phony numbers you are being fed by the Mainstream Media. The headline Unemployment Number is reached by not counting the orange people. Note the orange block is almost as large as the blue block.

Maybe this will start a conversation?

Call it whatever you want: fraud, lies, BS……whatever it is most people seem to be swallowing it without question.

Paul Craig Roberts: “The US Economy’s Phantom Jobs Gains Are A Fraud”

Don’t be convinced by last Thursday’s job report that it is your fault if you don’t have a job. Those 288,000 jobs and 6.1% unemployment rate are more fiction than reality.

In his analysis of the June Labor Data from the Bureau of Labor Statistics, John Williams (www.ShadowStats.com) wrote that the 288,000 June jobs and 6.1% unemployment rate are “far removed from common experience and underlying reality.” Payrolls were overstated by “massive, hidden shifts in seasonal adjustments,” and the Birth-Death model added the usual phantom jobs.

Williams reports that “the seasonal factors are changed each and every month as part of the concurrent seasonal-adjustment process, which is tantamount to a fraud,” as the changes in the seasonal factors can inflate the jobs number. While the headline numbers always are on a new basis, the prior reporting is not revised so as to be consistent.

The monthly unemployment rates are not comparable, so one doesn’t know whether the official U.3 rate (the headline rate that the financial press reports) went up or down. Moreover, the rate does not count discouraged workers who, unable to find a job, cease looking. To be counted among the U.3 unemployed, the person must have actively looked for work during the four weeks prior to the survey. The U.3 rate automatically declines as people who have been unable to find jobs cease trying to find one and thereby cease to be counted as unemployed.

There is a second official measure of unemployment that includes people who have been discouraged for less than one year. That rate, known as U.6, is seldom reported and is double the 6.1% rate.

Since 1994 there has been no official measure than includes discouraged people who have not looked for a job for more than a year. Including all discouraged workers produces an unemployment rate that currently stands at 23.1%, almost four times the rate that the financial press reports.

What you can take away from this is the opposite of what the presstitute media would have you believe. The measured rate of unemployment can decline simply because large numbers of the unemployed become discouraged workers, cease looking for work, and cease to be counted in the U.3 and U.6 measures of the unemployment rate.

The decline in the employment-population ratio from 63% prior to the 2008 downturn to 59% today reflects the growth in discouraged workers. Indeed, the ratio has not recovered its previous level during the alleged recovery, an indication that the recovery is an illusion created by the understated measure of inflation that is used to deflate nominal GDP growth.

The Birth-Death model adds an average of 62,000 jobs to the reported payroll jobs numbers each month. This arbitrary boost to the payroll jobs numbers is in addition to the Bureau of Labor Statistics’ underlying assumption that unreported jobs lost to business failures are matched by unreported new jobs from new business startups, an assumption that does not well fit an economy that fell into recession and is unable to recover.

Of the alleged 288,000 new jobs, 16,000, or 5.5 percent are in manufacturing, which is not very promising for engineers and blue collar workers. Growth in goods producing jobs has almost disappeared from the US economy. As explained below, to alter this problem the government is going to change definitions in order to artificially inflate manufacturing jobs.

In June private services account for 82 percent of the supposed new jobs. The jobs are found mainly in non-tradable domestic services that pay little and cannot be exported to help to close the large US trade deficit.

Wholesale and retail trade account for 55,300 jobs. Do you believe sales are this strong when retailers are closing stores and when shopping malls are closing?

Insurance (most likely the paperwork of Obamacare) contributed 8,500 jobs.

As so few can purchase homes, “real estate rental and leasing” contributed 8,500 jobs.

Professional and business services contributed 67,000 jobs, but 57% of these jobs were in employment services, temporary help services, and services to buildings and dwellings.

The other old standby, waitresses and bartenders, gave us 32,800 jobs, and amusements, gambling, and recreation gave us 3,500 jobs.

So, where are the jobs for university graduates? They are practically non-existent. Think of all the MBAs, but June had only 2,300 jobs for management of companies and enterprises.

Think of the struggle to get into law and medical schools. There’s no job payoff. June had jobs for 1,200 in legal services, which includes receptionists and para-legals. Where are all the law school graduates finding jobs?

Offices of physicians (mainly people who fill out the mandated paperwork and comply with all the regulations, which have multiplied under ObamaCare) hired 4,000 people. Outpatient care centers hired 700 people. Nursing care facilities hired 2,400 people. So where are the jobs for the medical school graduates?

Aside from all the exaggerations in the jobs numbers of which ShadowStats.com has informed us, just taking the jobs as reported, what kind of economy do these jobs indicate: a superpower whose pretensions are to exercise hegemony over the world or an economy in which opportunities are disappearing and incomes are falling?

Do you think that this jobs picture would be the same if the government in Washington cared about you instead of the mega-rich?

Some interesting numbers can be calculated from table A.9 in the BLS press release. John Williams advises that the BLS is inconsistent in the methods it uses to tabulate the data in table A.9 and that the data is also afflicted by seasonal adjustment problems. However, as the unemployment rate and payroll jobs are reported regardless of their problems, we can also report the BLS finding that in June 523,000 full-time jobs disappeared and 800,000 part time jobs appeared.

Here, perhaps, we have yet another downside of the misnamed Obama “Affordable Care Act.” Employers are terminating full-time employment and replacing the jobs with part-time employment in order to come in under the 50-person full time employment that makes employers responsible for fringe benefits such as health care.

Americans are already experiencing difficulties making ends meet, despite the alleged “recovery.” If yet another half million Americans have been forced onto part-time pay with consequent loss of health care and other benefits, consumer demand is further compressed, with the consequence, unless hidden by statistical trickery, of a 2nd quarter negative GDP and thus officially the reappearance of recession.

What will the government do if a recession cannot be hidden? If years of unprecedented money printing and Keynesian fiscal deficits have not brought recovery, what will bring recovery? How far down will US living standards fall for the 99% in order that the 1% can become ever more mega-rich while Washington wastes our diminishing substance exercising hegemony over the world?

Just as Washington lied to you about Saddam Hussein’s weapons of mass destruction, Assad’s use of chemical weapons, Russian invasion of Ukraine, Waco, and any number of false flag or nonexistent attacks such as Tonkin Gulf, Washington lies to you about jobs and economic recovery. Don’t believe the spin that you are unemployed because you are shiftless and prefer government handouts to work. The government does not want you to know that you are unemployed because the corporations offshored American jobs to foreigners and because economic policy only serves the oversized banks and the one percent.

Just as the jobs and inflation numbers are rigged and the financial markets are rigged, the corrupt Obama regime is now planning to rig US manufacturing and trade statistics in order to bury all evidence of offshoring’s adverse impact on our economy.

The federal governments Economic Classification Policy Committee has come up with a proposal to redefine fact as fantasy in order to hide offshoring’s contribution to the US trade deficit, artificially inflate the number of US manufacturing jobs, and redefine foreign-made manufactured products as US manufactured products. For example, Apple iPhones made in China and sold in Europe would be reported as a US export of manufactured goods. Read Ben Beachy’s important report on this blatant statistical fraud in CounterPunch’s July 4th weekend edition:http://www.counterpunch.org/2014/07/04/we-didnt-offshore-manufacturing/

China will not agree that the Apple brand name means that the phones are not Chinese production. If the Obama regime succeeds with this fraud, the iPhones would be counted twice, once by China and once by the US, and the double-counting would exaggerate world GDP.

For years I have exposed the absurd claim that offshoring is merely the operation of free trade, and I have exposed the incompetent studies by such as Michael Porter at Harvard and Matthew Slaughter at Dartmouth that claimed to prove that the US was benefitting from offshoring its manufacturing. My book published in 2012 in Germany and in 2013 in the US, The Failure of Laissez Faire Capitalism and Economic Dissolution of the West, proves that offshoring has dismantled the ladders of upward mobility that made the US an opportunity society and is responsible for the decline in US economic growth. The lost jobs and decline in the middle class has contributed to the rise in income inequality, the destruction of tax base for cities and states, and loss of population in America’s once great manufacturing centers.

For the most part economists have turned a blind eye. Economists serve the globalists. It pays them well.

The corruption in present-day America is total. Psychologists and anthropologists serve war and torture. Economists serve globalism and US financial hegemony. Physicists and chemists serve the war industries. Physicists and computer geeks serve NSA. The media serves the government and the corporations. The political parties serve the six powerful private interest groups that rule the country.

No one serves truth and liberty.

I predict that within ten years truth and liberty will be forbidden words uttered only by “domestic extremists” who are a threat that must be exterminated without due process of law.

America has left us. We now have the tyranny of the Orwellian state that rules, not by the ballot box and Constitution, but by force and propaganda.