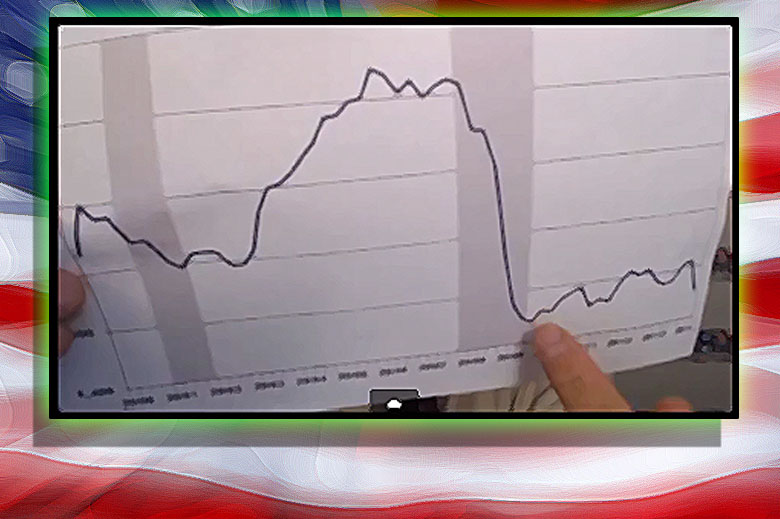 Analysts’ projections had been all over the place from 3-4-5% down to negative 3-4-5%. And you may ask how can there be such a wide range? Although empirically most have an intuitive sense, no on can tell what the announced number will be bubbling out of the alchemists’ cauldron of statistics.

First one must remember that the formula used to arrive at the GDP number has been changed so going forward the numbers are higher than they would have been using the traditional method.

Awaiting the latest “Big Number” to be announced, that is Q2 GDP this story on CNBC.com is quite telling of our current state of affairs.

“It may take a while before investors get a clear picture on just how well—or poorly—the U.S. economy is performing.”

“As Wall Street awaits Wednesday’s reading on gross domestic product in the second quarter, two things are becoming clear: Growth is a good deal short of where most economists had expected it to be by now, and even a particularly strong showing over the past three months probably came in large part because the period before it was so bad.”

“As in the last several years, the herd is likely to be disappointed,” A. Gary Shilling wrote in a post on his firm’s website.

“He believes weak consumer spending combined with low levels of residential construction and exports will hold back second-quarter GDP—and possibly even indicate the U.S. is in recession.”

The fact of the matter is, if you’ve been paying attention at all and you have some cognitive abilities of your own, you’ve been able to see through the smoke and mirrors of this Recovery Illusion being fed to you by the MainStream Media.

All of the numbers used to create this illusion have been massaged and manipulated to look much rosier than their realities. Before we even tackle the free money from the Fed being used for stock buy-backs to create phony Earnings-Per-Share numbers and inflated stock prices, let’s just stick to addressing the much anticipated GDP.

The initial number is always revised without fail. Which always puzzles me. Why not wait until all the necessary data is compiled then publish a concrete number?

Remember, Q1 was first announced to be around 0.1% and after several revisions, settled in at -2.9%.

The Commerce department reported Q2 GDP which blew estimates out of the water, printing at 4.0%, above the declining 3.0% consensus, as a result of a surge in Inventories and Fixed Investment, both of which added over 2.5% of the total print, while exports added another 1.23% to the GDP number. The full breakdown by component is shown below.

“The Bureau emphasized that the second-quarter advance estimate released today is based on source data that are incomplete or subject to further revision by the source agency. The “second” estimate for the second quarter, based on more complete data, will be released on August 28, 2014.”

Speaking of revisions, today the BEA also released its annual revision of all data from 1999 to Q1 2014, which made last quarter’s “harsh weather” -2.9% print a more palatable -2.1%, in the process throwing everyone’s trendline calculations off as yet another GDP redefinition was implemented.

..…so, remember the scene in the film 1984, when the Ministry of Truth is clipping the old news, dropping it into the furnace and re-posting their new version………

GDP Deja Vu Stunner: Over Half Of US Growth In The Past Year Is From Inventory Accumulation

Back in December 2013, when everyone was expecting a 3% GDP print for Q1, we did a simple analysis concluding that “Inventory Hoarding Accounts For Nearly 60% Of GDP Increase In Past Year.” We stated that this “hollow growth”, which is merely producers pulling demand from the future courtesy of cheap credit and assuming the inventory will be sold off in ordinary course of business without bottom-line slamming liquidations or dumping, and which further assumes a healthy US consumer and global economy, is a flashing red flag for the future of US economic growth. In fact, we were one of the very few who warned that Q1 GDP would be a disaster: “The problem with inventory hoarding, however, is that at some point it will have to be “unhoarded.” Which is why expect many downward revisions to future GDP as this inventory overhang has to be destocked.”

This is precisely what happened in Q1, however it was blamed on the “harsh weather.”

Alas, following today’s “spectacular” 4.0% GDP print following the predicted plunge in the US economy in Q1, we can again conclude that not only has nothing changed, but what we warned in Q4 of 2013 is about to happen all over again, and the inventory overhang (which incidentally was estiamted by the BEA and will certainly be revised lower next month) is about to slam future US growth.

Interview: John Williams of Shadowstats.com on USAwatchdog with Greg Hunter

In the following interview, (posted July 13, 2014) economist John Williams of Shadowstats.com presents raw data on the economy. He points out:

From the standpoint of Aetna, the U.S. economy does not feel like it’s growing as quickly as the government reported on Wednesday, Aetna Chairman and CEO Mark Bertolini said.

CEO Of Europe’s Largest Insurer Pops The Utopia Bubble: “Nothing Is Solved And Everybody Knows It”

It’s one thing for a tinfoil fringe blog to repeat, month after month, that nothing in Europe(or US) has been fixed, that Draghi’s(the Fed’s) disastrous policies are merely concentraing and stockpiling even more unresolved problems – for now ignored courtesy of the gentle sprinkle of ZIRP, or rather NIRP “fairy dust” – and that just like Portugal showed panic can grip the entire continent literally overnight because everyone knows this. It is something entirely different for the CEO of Europe’s largest insurer to make the same statement.

…the same could be said of the Fed and the US

When asking Allianz SE’s chief investment officer about the euro area’s sovereign debt woes, be prepared for an emphatic response.

“The fundamental problems are not solved and everybody knows it,” Maximilian Zimmerer said at Bloomberg LP’s London office. The “euro crisis is not over,” he said.

While extraordinary stimulus from the European Central Bank has encouraged investors to pile into the region’s government bonds this year, that’s not a sufficient remedy for Zimmerer, who oversees 556 billion euros ($757 billion) at Europe’s largest insurer. Countries are still building up their debt piles, and that’s storing up trouble for the future, he said.

Here’s the punchline: everyone knows that Draghi, the unelected dictators of Europe, and all of its bankers are lying when the say day after day that things are better. However, at least there was unanimity in the “head-in-the-sand” exercise, which recall from game theory works only if all participants in the charade agree to the ignore reality.

Today for the first time, a “member of the club” finally called out Europe on its bullshit.

John Williams (www.shadowstats.com) provides inflation estimates based on previous official methodology when the Consumer Price Index still represented the cost of a constant standard of living. The 1.26% inflation measure used to deflate first quarter nominal GDP is unrealistic, as Americans who make purchases are aware.

THIS IS NOT A RECOVERY

US job cuts soar, thanks to tech layoffs: Challenger

The global outplacement firm said in its monthly layoff report that planned payroll reductions hit 46,887, the second highest level of the year. That compares with June’s 31,434 cuts, which were the fewest of 2014. The firm added that massive staff reductions by Hewlett-Packard and Microsoft helped inflate this month’s figure.

Technology companies have been slashing jobs at a more rapid pace than they have in years. According to data released Monday by outplacement firm Challenger, Gray & Christmas, job cuts in the tech sector for the first half of 2014, which totaled more than 48,000, were up 68% compared with the same period last year. What’s more, this six-month job-cut total nearly surpassed the 56,918 planned cuts announced in all of 2013 — and that’s before you even factor in the 18,000 job cuts announced by Microsoft in July.

Apple to lay off about 200 people at Beats: Bloomberg

J.P. Morgan Chase & Co. is cutting hundreds of technology-support employees in its corporate and investment bank as part of an overall push to trim expenses as the bank battles sluggish revenue, a person familiar with the matter said.

Kellogg to shut down snacks plant in Georgia, cut 325 jobs

Chart Of The Day: For Caterpillar The “Great Recovery” Is Just As Bad As The Great Financial Crisis

New Home Sales Collapse 20% From May To Dec 2012 Levels; Biggest Miss In A Year

Case-Shiller Home Prices Tumble Most Since Dec 2011, Miss 2nd Month In A Row

The Typical Household, Now Worth a Third Less