Why Oil Is Plunging: The Other Part Of The “Secret Deal” Between The US And Saudi Arabia 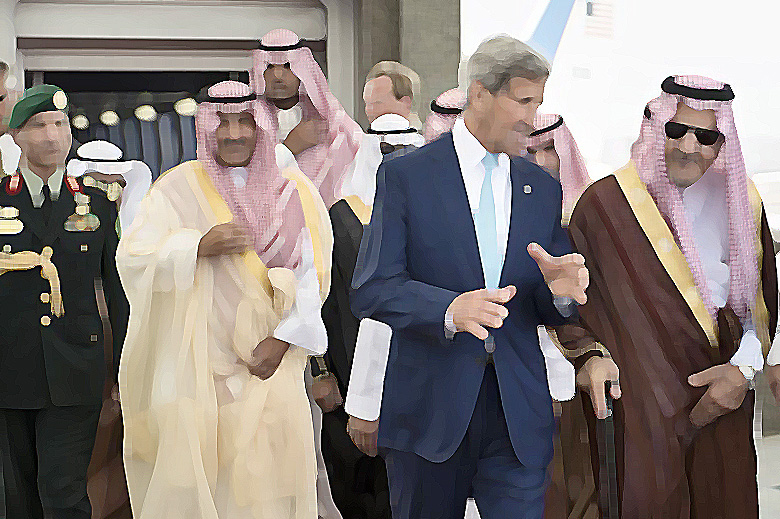 It has been a little over a year since I started this Blog. At that time the US was desperately trying to garner support to start bombing and advancing into Syria to topple President Bashar Al Assad and his regime. Phony trumped-up charges of chemical weapons attacks on his own people were eventually dismissed as fabrications and support for the campaign withered away.

A closer look by anyone really paying attention shows that the purpose of such a campaign is rooted not in the flag-waving humanitarian efforts to “spread democracy” and “protect our freedoms” around the globe but rather has more to do with a pipeline through Syria. Simply put, such a pipeline would pit West against East as prime suppliers to Europe. Assad stands in the way of such a pipeline. Among Assad’s supporters are two main allies: Russia, a prime supplier to Europe and neighboring Iran who also has plans for a pipeline to China. The mainstream media is running a full-court-press to demonize all the bad guys.

A closer look into the situation in Ukraine exposes similar motives. It is always about power and control of natural resources and their flows. Emotionally charged causes like freedom & democracy and of course “keeping us safe” are much easier sells.

If our motives truly were humanitarian efforts to spread freedom and democracy this week’s football propaganda campaign for our “Global Force for Good” might be used to convince the public we need to go into Saudi Arabia, but of course not as they are our biggest ally in the region.

A year later, things could not have worked out better for those pulling the strings of the US forces. Coincidentally, ISIS pooped up out of nowhere and has led the US military campaign right into Syria and its infrastructure……(and Assad).

Two weeks ago, we revealed one part of the “Secret Deal” between the US and Saudi Arabia: namely what the US ‘brought to the table’ as part of its grand alliance strategy in the middle east, which proudly revealed Saudi Arabia to be “aligned” with the US against ISIS, when in reality John Kerry was merely doing Saudi Arabia’s will when the WSJ reported that “the process gave the Saudis leverage to extract a fresh U.S. commitment to beef up training for rebels fighting Mr. Assad, whose demise the Saudis still see as a top priority.”

What was not clear is what was the other part: what did the Saudis bring to the table, or said otherwise, how exactly it was that Saudi Arabia would compensate the US for bombing the Assad infrastructure until the hated Syrian leader was toppled, creating a power vacuum in his wake that would allow Syria, Qatar, Jordan and/or Turkey to divide the spoils of war as they saw fit.

A glimpse of the answer was provided earlier in the article “The Oil Weapon: A New Way To Wage War“, because at the end of the day it is always about oil, and leverage.

Saudi Arabia to pressure Russia, Iran with price of oil

Saudi Arabia will force the price of oil down, in an effort to put political pressure on Iran and Russia, according to the President of Saudi Arabia Oil Policies and Strategic Expectations Center.

To pressure Iran to limit its nuclear program, and to change Russia’s position on Syria, Riyadh will sell oil below the average spot price at $50 to $60 per barrel in the Asian markets and North America…The marked decrease in the price of oil in the last three months, to $92 from $115 per barrel, was caused by Saudi Arabia, according to Abanmy.

With oil demand declining, the ostensible reason for the price drop is to attract new clients, Abanmy said, but the real reason is political. Saudi Arabia wants to get Iran to limit its nuclear energy expansion, and to make Russia change its position of support for the Assad Regime in Syria. Both countries depend heavily on petroleum exports for revenue, and a lower oil price means less money coming in….

America’s suddenly once again very strategic ally, Saudi Arabia, does everything in its power to break Putin.

Saudi Arabia warns of shift away from U.S. over Syria, Iran

(Reuters) – Upset at President Barack Obama’s policies on Iran and Syria, members of Saudi Arabia’s ruling family are threatening a rift with the United States that could take the alliance between Washington and the kingdom to its lowest point in years…

Prince Bandar bin Sultan told European diplomats that the United States had failed to act effectively against Syrian President Bashar al-Assad and the Israeli-Palestinian conflict, was growing closer to Tehran, and had failed to back Saudi support for Bahrain when it crushed an anti-government revolt in 2011, the source said…

That was one of the low points in U.S.-Saudi ties, which were also badly shaken by the September 11, 2001, attacks on the United States. Most of the 9/11 hijackers were Saudi nationals…

Saudi Arabia, the world’s biggest oil exporter, ploughs much of its earnings back into U.S. assets. Most of the Saudi central bank’s net foreign assets of $690 billion are thought to be denominated in dollars, much of them in U.S. Treasury bonds.

While one can’t help but snicker when the administration of a Nobel Peace Prize winner has launched at least 7 offensive wars, mosty against Muslim countries with virtually none obtaining prior approval from Congress, until now Obama at least showed the sense to realize that maintaining proper “made for propaganda media” optics matters, even if his underlying actions were the very definition of hypocrisy.

According to Yahoo News, a White House statement confirmed the looser policy came in response to questions about reports that as many as a dozen civilians, including women and young children, were killed when a Tomahawk missile struck the village of Kafr Daryan in Syria’s Idlib province on the morning of Sept. 23.

it has a “looser policy standards” when it comes to preventing  civilian deaths from U.S. drone strikes in U.S. military operations in Syria and Iraq.

But putting the bullshit aside, the bottom line here is quite simple: in order to help Qatar traverse Syria with its own Gazprom-bypassing natgas pipeline to Europe, and wipe out the same ISIS it created, and which has caused so many headaches for the Saudis, which in exchange for getting the US to bomb ISIS agreed to dump crude, split up OPEC once again, send the price of oil plunging and cause a Russian budget crisis… Obama not only has zero qualms to kill innocent women and children….

Suspicions Run Deep in Iraq That C.I.A. and the Islamic State Are United

BAGHDAD — The United States has conducted an escalating campaign of deadly airstrikes against the extremists of the Islamic State for more than a month. But that appears to have done little to tamp down the conspiracy theories still circulating from the streets of Baghdad to the highest levels of Iraqi government that the C.I.A. is secretly behind the same extremists that it is now attacking…..

“It is obvious to everyone that the Islamic State is a creation of the United States and Israel.”