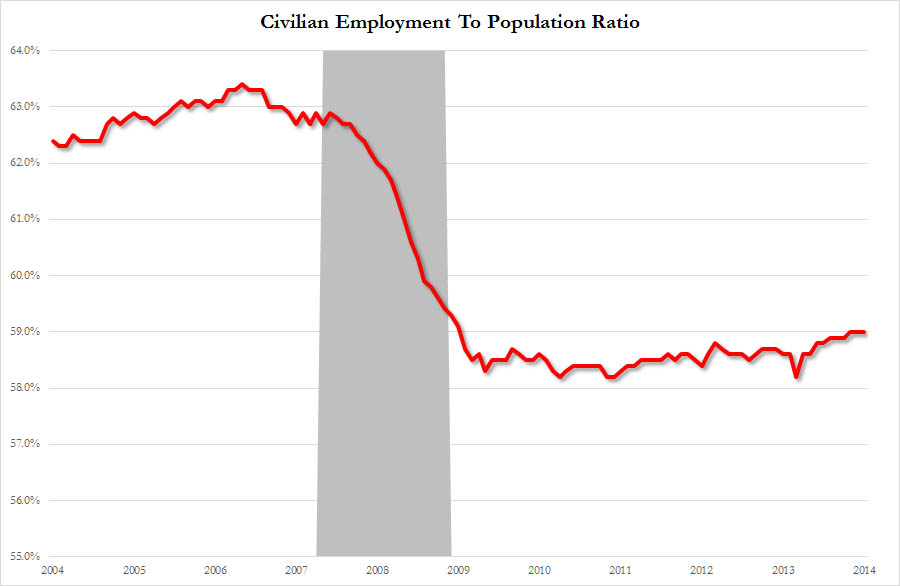 As we approach mid-term elections, once again the Bullsh@&t! is being shoveled and hoisted for public consumption. As far as I can tell no one really gives a flying-f#$%^ especially now that football season is underway.

Let’s just focus on the phony “unemployment rate” for this post.

As anyone who actually digs past the headlines and one-line-soundbite stories on the mainstream TV news or financial cheerleading networks knows, the numbers presented for public consumption are massaged and manipulated with accounting tricks and gimmicks to sound far better than the realities they are supposed to represent.

For more detailed information regarding statistical manipulation and fraud, see our previous post: The October 2012 Pre-Election Jobs Report Was Faked.

The release of the September Jobs Numbers does not disappoint in this regard. It is almost to good to be true….no wait is actually is too good to be true. We are nearing another election, so expect every blowhard to be out there taking credit for the great numbers. If only they could tell the truth………

Know this, to arrive at that “too-good-to-be-tue” 5.9% unemployment rate they simply don’t count everyone. For example, if you’ve been out of work and haven’t been on an interview in the past month you are no longer unemployed, you’re simply out of the work force. Hmmm, that’s rather convenient on a spreadsheet, but how does that impact the individual, their family, the rest of us?  If you lost a well-paying job and are working two part-time jobs to try and make ends meet a politician will take credit for two jobs created. It is rather absurd….

While by now everyone should know the answer, for those curious why the US unemployment rate just slid once more to a meager 5.9%, the lowest print since the summer of 2008, the answer is the same one we have shown every month since 2010: the collapse in the Labor Force Participation Rate, which in September slid from an already three decade low 62.8% to 62.7% – the lowest in over 36 years, matching the February 1978 lows.

And while according to the Household Survey, 232,000 people found jobs, what is more disturbing is that the people not in the labor force, rose to a new record high, increasing by 315,000 to 92.6 million!

And that’s how you get a fresh cycle low in the unemployment rate.

Interested why despite the euphoric headline NFP print, a cursory glance deeper inside the payrolls report reveals weakness after weakness, with both participation plunging again and wages the worst since last summer? Here is the answer: 4 of the top 5 largest job additions in September, retail trade, leisure and hospitality, education and health and temp help, were of the lowest quality, and paying, jobs possible. So yes, America added a whole lot of minimum wage waiters, store clerks, groundskeepers and temps: truly the stuff New Normal “recoveries” are made of.

The further one digs into today’s “blockbuster” jobs report, the uglier it gets. Because it is not only the participation rate collapse, the slide in average earnings, but, topping it all off, we just learned that the future of the US workforce is bleak. In fact, with the age of the median employed male now in their mid-40’s, the US workforce has never been older. Case in point: the September data confimed that the whopping surge in jobs… was thanks to your “grandparents” those in the 55-69 age group, which comprised the vast majority of the job additions in the month, at a whopping 230K.This was the biggest monthly jobs increase in the 55 and over age group since February!

What about the prime worker demographic, those aged 25-54 and whose work output is supposed to propel the US economy forward? They lost 10,000 jobs.

Of course, don’t expect any of this to be mentioned on any financial entertainment outlets: it would spoil the party of today’s “surging” jobs day.

Here is the breakdown of job gains by all age groups since the start of the depression in December 2007: 5.5 million jobs “gained” in the 55-69 age group. What about the core, 25-54 demographic? Negative 2.04 million.

Here’s a chart showing those in that age group currently employed (95.6 million) and those who aren’t (28.9 million):

“There are 124.5 million Americans in their prime working years (ages 25–54). Nearly one-quarter of this group—28.9 million people, or 23.2 percent of the total—is not currently employed. They either became so discouraged that they left the labor force entirely, or they are in the labor force but unemployed. This group of non-employed individuals is more than 3.5 million larger than before the recession began in 2007,” writes the Republican side of the Senate Budget Committee.

“Those attempting to minimize the startling figures about America’s vanishing workforce—workplace participation overall is near a four-decade low—will say an aging population is to blame. But in fact, while the workforce overall has shrunk nearly 10 million since 2009, the cohort of workers in the labor force ages 55 to 64 has actually increased over that same period, with many delaying retirement due to poor economic conditions.

“In fact, over two-thirds of all labor force dropouts since that time have been under the age of 55. These statistics illustrate that the problems in the American economy are deep, profound, and pervasive, afflicting the sector of the labor force that should be among the most productive.”

The September establishment survey showed a 248k job gain, but that was the seasonally maladjusted, preliminarily guesstimated version which will be revised in October and November, and then re-benchmarked several more times in the coming years. So let’s take a pass on the enthusiasm with respect to this fleeting monthly delta and consider a couple of trend points evident in this morning’s release—-data points which aren’t going to get revised away and which actually provide some fundamental insight about the actual “employment situation” and the true condition of the US economy…

My favorite number is right at the top of the BLS table and it’s 155.9 million. That is the civilian labor force number for September and it compares to 154.9 million reported for October 2008 way back when the financial crisis was just erupting. The reason that rather tepid gain of 1 million labor force participants over the course of six years is important is that during the same period the working age civilian population (over 16 years) rose from 234.6 million to 248.4 million—-or by 14 million in round terms…..

Indeed, the single most important number in today’s report is 102 million, which is the rounded sum of adults either not in the labor force or unemployed, and it amounts to 41% of the adult population. Stated differently, that’s the number of adults who do not contribute to current production and must be supported either by family breadwinners or the state—-and nowadays especially the latter….

So what is really embodied in today’s report is more evidence that America’s dependency ratio is still rising and that the already crushing burden of the welfare state will weigh ever more heavily on an economy that is visibly failing as measured by any of the fundamental trends of performance. Indeed, it is well to recall that even today—after what the clueless occupant of the White House claims as 10 million new jobs when 90% of that number, in fact, represents “born again” jobs relative to the 2007 peak—-there are 110 million Americans living in households receiving means-tested benefits and 158 million in households that receive transfer payments of all types.

One-fifth of U.S. workers were laid off in past five years, study says

One in five U.S. workers was laid off in the past five years and about 22% of those who lost their jobs still haven’t found another one, according to a new survey that showed the extent Americans have struggled in the sluggish labor market since the Great Recession ended…. (Did it?)

Nearly 40% said it took more than seven months to find employment and about one in five of laid-off workers said all they could find was a temporary position.

Almost half — 46% — of the estimated 30 million layoff victims who found new jobs said they paid less then their old ones, according to the survey….

Interview with John Williams of Shadowstats.com by Greg Hunter

For a closer look behind the numbers and how they are “massaged and manipulated”,
John Williams of Shadowstats.com is interviewed (8/31/14) by Greg Hunter on USAwatchdog.com

On unemployment and the Obama Administration’s recent claim of creating “nearly 10 million new jobs in the last four and a half years,” Williams says, “If we were to go back to the levels before the recession, we would need at least 11 million new jobs.  That’s 11 million more than we have now. . . . We are in serious trouble here.”

STUDY: NET JOB GROWTH IN NC SINCE 2000 WENT TO IMMIGRANTS

The net increase in the number of employed working-age adults in North Carolina has gone entirely to legal and illegal immigrants since 2000, according to an analysis of government data conducted by the Center for Immigration Studies.

“The total number of working-age (16 to 65) immigrants (legal and illegal) holding a job in North Carolina increased by 313,000 from the first quarter of 2000 to the first quarter of 2014, while the number of working-age natives with a job declined by 32,000 over the same time,” the report reads, explaining that in the past 14 years has seen the labor-force participation of natives in North Carolina in decline.

The study comes as North Carolina Democratic Sen. Kay Hagan — who voted for the Senate-passed “Gang of Eight” immigration bill last summer that would have provided a path to legalization to the undocumented population and significantly increased the number of guest workers in the United States — is engaged in a tight re-election bid against Republican challenger Thom Tillis.

“A huge number of working-age people in North Carolina are not working, and labor force participation remains at record lows. Thus, it is remarkable that any of the state’s political leaders would support legislation that would actually increase the number of foreign workers allowed into the country,” Steven Camarota, CIS’s head of research and the report’s lead author, said in a statement.

CIS, in recent weeks, has been publishing studies showing the negative impact of immigration on work force participation among “natives” in certain states and across the country.