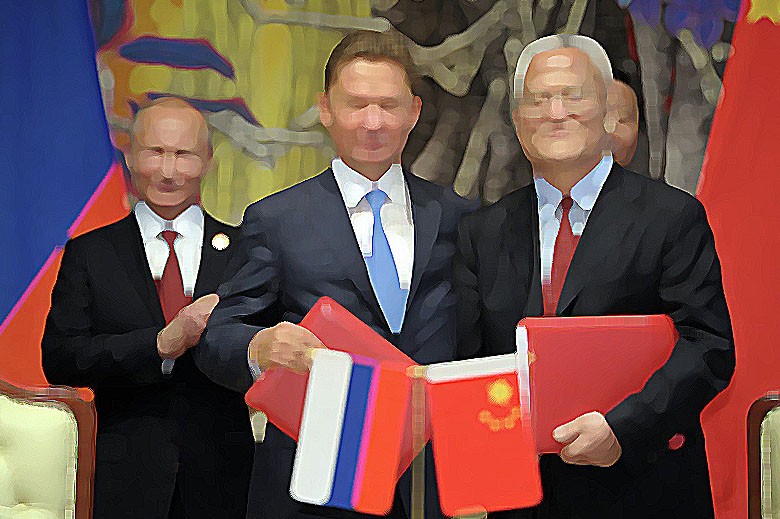 If after months of Eurasian axis formation, one still hasn’t realized why in the grand game over Ukraine supremacy – not to mention superpower geopolitics – Europe, and the West, has zero leverage, while Russia has all the trump cards, then today’s latest development in Chinese-Russian cooperation should make it abundantly clear.

Overnight, following a grand ceremony in the Siberian city of Yakutsk, Russia and China officially began the construction of a new gas pipeline linking the countries. The bottom line to Russia – nearly half a trillion after China’s CNPC agreed to buy $400bn in gas from Russia’s Gazprom back in May. In return, Russia will ship 38 billion cubic meters (bcm) of gas annually over a period of 30 years. The 3,968 km pipeline linking gas fields in eastern Siberia to China will be the world’s largest fuel network in the world.

As BBC reports, “the deal will lessen Russia’s dependence on European buyers, who have imposed economic sanctions because of the crisis in Ukraine.” That is not news and has been known for months ever since the long-anticipated Holy Grail deal was signed in May. More importantly, as Zero Hedge reported last week, one awaits as the invoices become increasingly less denominated in USD, and more in CNY or RUB.

Increasingly it appears that China will defer to Russia when it comes to cementing bilateral commodity deals, especially if it means further distancing both sides from what has emerged as a natural foe to both aspirational nations: the United States.

“The new gas branch will significantly strengthen the economic cooperation with countries in the Asia-Pacific region and above all – our key partner China.”   Vladimir Putin

But, Obama keeps repeating Russia is isolated by the entire world… Is he once again simply, gasp, lying?

To summarize all of the above: while Europe will continue to depend on Russia for its gas imports indefinitely, Russia will no longer depend on Europe for its exports.

The Nail In The Petrodollar Coffin: Gazprom Begins Accepting Payment For Oil In Ruble, Yuan

Several months ago, when Russia announced the much anticipated “Holy Grail” energy deal with China, some were disappointed that despite this symbolic agreement meant to break the petrodollar’s stranglehold on the rest of the world, neither Russia nor China announced payment terms to be in anything but dollars. In doing so they admitted that while both nations are eager to move away from a US Dollar reserve currency, neither is yet able to provide an alternative.

This changed in late June when first Gazprom’s CFO announced the gas giant was ready to settle China contracts in Yuan or Rubles, and at the same time the People’s Bank of China announced that its Assistant Governor Jin Qi and Russian central bank Deputy Chairman Dmitry Skobelkin held a meeting in which they discussed cooperating on project and trade financing using local currencies. The meeting discussed cooperation in bank card, insurance and financial supervision sectors.

And yet, while both sides declared their operational readiness and eagerness to bypass the dollar entirely, such plans remained purely in the arena of monetary foreplay and the long awaited first shot across the Petrodollar bow was absent.

According to Russia’s RIA Novosti, citing business daily Kommersant, Gazprom Neft has agreed to export 80,000 tons of oil from Novoportovskoye field in the Arctic; it will accept payment in rubles, and will also deliver oil via the Eastern Siberia-Pacific Ocean pipeline (ESPO), accepting payment in Chinese yuan for the transfers. Meaning Russia will export energy to either Europe or China, and receive payment in either Rubles or Yuan, in effect making the two currencies equivalent as far as the Eurasian axis is conerned, but most importantly, transact completely away from the US dollar thus, finally putin'(sic) in action the move for a Petrodollar-free world.

In retrospect it will be very fitting that the crowning legacy of Obama’s disastrous reign, both domestically and certainly internationally, will be to force the world’s key ascendent superpowers (we certainly don’t envision broke, insolvent Europe among them) to drop the Petrodollar and end the reserve status of the US currency.

US Threatens Russia Over Petrodollar-Busting Deal

On the heels of Russia’s potential “holy grail” gas deal with China, the news of a Russia-Iran oil “barter” deal, it appears the US is starting to get very concerned about its almighty Petrodollar

And here is Voice of Russia, “Russia prepares to attack the Petrodollar“:

The US dollar’s position as the base currency for global energy trading gives the US a number of unfair advantages. It seems that Moscow is ready to take those advantages away.

The existence of “petrodollars” is one of the pillars of America’s economic might because it creates a significant external demand for American currency, allowing the US to accumulate enormous debts without defaulting.

These Clowns Are Dragging Us Into War

The US and EU have worked for years to see their desire to take over Ukraine come to fruition. They’ve come a long way, but they wanted Crimea and the Donbass region most of all, and those they still don’t have. Still, they’ve so far shown themselves more than willing to assist first in killing thousands of eastern Ukrainians to get what they want, and now they are prepared to start a war over it.

The well-prepared, built-up step by step, storyline in the western press is the threat of Russia’s expansionary drift.

When we look at what has actually happened over the past decade, and what we can prove when it comes to expansion drift, that is without a doubt a painfully hollow story. Since what we actually do know, what is not mere conjecture, is that it has instead been the west, through NATO, that has been in expansion mood.

Despite solid agreements not to move NATO’s borders eastward, the alliance has done nothing but move east, and is now planning to put even more troops and new army bases right on Russia’s doorstep. The narrative to justify this NATO expansion that breaches those former agreements, which we can see time and again, is that Russia is moving west, for which there is no proof, only accusations, and that NATO territory is inviolable, but Ukraine is not a NATO member.

While voices in Europe increasingly claim that the threat to Ukraine is a threat to Europe (i.e. the EU), Ukraine is no more an EU member than it is a NATO member. Brussels seems to want it to be, but that’s where the narrative ends. So it’s simply being changed on the fly and has now become: “Ukraine is fighting a war on behalf of all Europe”, according Lithuanian leader Dalia Grybauskaite.

Which is where I think: really, Ukraine has killed over 2000 of its own citizens ‘on behalf of Europe’?

The entire conflict could be solved in a heartbeat if Kiev would simply tell the Donbass leadership that they can be autonomous. But that’s not what Poroshenko wants, or Yatsenyuk, and certainly not Washington and Brussels. Because the Donbass is by far the richest region in Ukraine. Which however happens to be home to people who don’t want to be ruled by the present Kiev leadership.

Essentially, the western leadership is saying that if the ‘Donbass rebels’, and Russia, won’t let the Ukraine army do just what it wants in east Ukraine, there will be war. But it’s not our leaders who are going to be the boots on the ground. And because Obama has pledged no US military involvement in Ukraine – though CIA, Blackwater and who knows who else, are present anyway -, it will have to be European boots on the ground in Ukraine.

Perhaps prior to the official war declaration our politicians and media can tell us where the remains of the BUK rocket are that’s alleged to have downed MH17, where the contents are of the black boxes, and where the Air Traffic Control conversations with the pilots are which were allegedly confiscated by the Ukraine secret service on July 17.

It’s perhaps hard to remember due to the misinformation tsunami, but the MH17 has been a major driver of the western public’s anger vs Russia, and their acceptance of sanctions and other decisions, and now the threat of war. While it still may just as well not have been the Donbass rebels who shot that plane, but the Ukraine army, or Blackwater or the CIA. We simply don’t know…

…But these clowns are dragging us into war. And yes, maybe it would be a good idea for you to tell them that you don’t want them to. Before your kids, or their friends, their neighbors, start dying in some far away ugly theater they should never have been part of.

For more on Ukraine:

Why Did MH17 Disappear From Media Coverage..As Ukraine Crisis Continues

What The Press Isn’t Reporting About the MH17 Tragedy