Americans Not In The Labor Force Rise To Record 92.9 Million As Participation Rate Declines Again 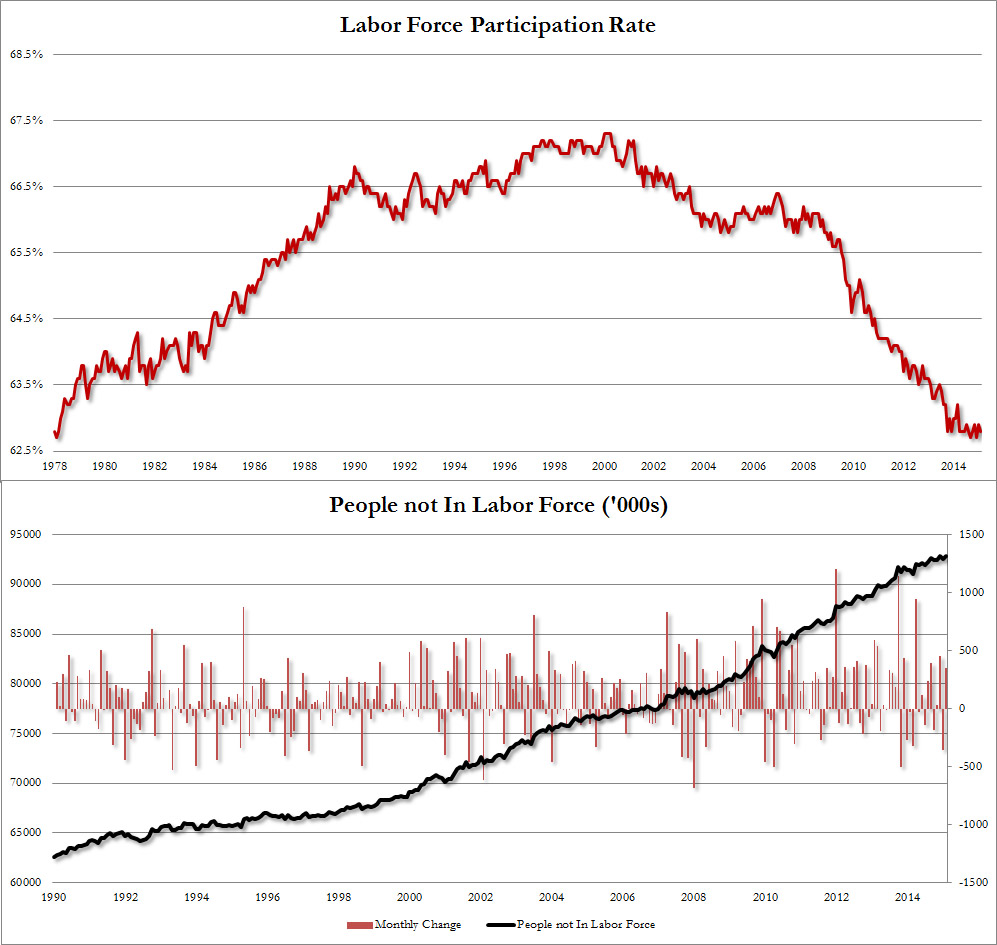 It has gotten so ridiculous watching the talking heads on a CNBC panel discuss the phony numbers releases, that my mind’s eye sees a bunch of clowns riding unicycles and juggling.

Mark Zandi is still actually explaining away the drop in the Labor Participation Rate as a result of all the baby-boomers retiring. While that may be part of it, He fails to mention that most of those dropping out are under retirement age and those 55 and older are still working and acquiring the part-time jobs that the BLS likes to count as job growth. How can one comfortably retire with suppressed interest rates obliterating the compounding growth myth?$%^&

Zandi actually said: (I’ll paraphrase) With all the boomers retiring, Soon our problem will be a lack of workers!

What about the 92.9 million?……I’m not so sure how that even jives with all the new ones being imported, given driver’s licenses, free healthcare, a cellphone and an IRS tax refund when they haven’t even paid a dime in so far……I wonder how they’ll vote?  …..save that for another post.

What’s even more ridiculous is to watch them discuss whether or not the Fed minutes will include the word “patient” and how many times…..it’s all complete nonsense.

Labor Participation Rate – 62.8% Ok, so that leaves 37.2% of working-age Americans not even counted in the work force…….

Your Bu!!$hit detector should be buzzing of the wall!

The fact that their story makes no sense is becoming more and more obvious. In the “old days” (as recently as early 90’s) with the old method of calculating the unemployment rate a 5.5% figure meant things were humming along. They know this is not the case so they are starting to squirm…..

The  Fed says a rate hike is data dependent. Then the phony numbers that are used to make everyone believe there’s a recovery look better so they start tap-dancing and playing with semantics. It is absolutely ridiculous.

“Will it be June, will it be September?”

So at one of those nonsensical Fed hearings where members of Congress pepper the Chairman with questions, why won’t anyone simply ask: “If the economy is doing so well why won’t you raise rates?”

They cannot raise rates. If they allow them to go up the illusion implodes.

For those (very few now, with even the Fed admitting the unemployment rate has become a meaningless, anachronistic relic) still wondering why the unemployment rate dropped once again, sliding from 5.7% to 5.5%, the reason is that while the number of unemployed Americans dropped by 274K thousand while those employed rose by 96K, the underlying math is that the civilian labor force dropped from 157,180 to 157,002 (following the major revisions posted last month), while the people not in the labor force rose by 354,000 in February, rising to a record 92,898,000 (people who currently want a job rose to 6,538K) matching the all time high number of Americans not in the labor force.

End result: the labor force participation rate dropped once more, declining to only 62.8%, which as the chart below shows is just off the lowest print recorded since 1978.

Did The BLS Once Again Forget To Count The Tens Of Thousands Of Energy Job Losses?

A month ago we asked if the “BLS Forget To Count Thousands Of Energy Job Losses” when as we showed, the BLS reported that only 1,900 jobs were lost in the entire oil and gas extraction space, which was a vast underestimation of what is taking place in reality, when compared to not only corporate layoff announcements, but what Challenger had reported was going on in the shale patch, when it calculated that some 21,300 jobs were lost in January in just the energy sector.

Today we ask again: did the BLS once more forget to add the now tens of thousands of jobs lost in the US energy sector? We ask because the divergence is getting, frankly,ridiculous.

In the February NFP report, the establishment survey reported that just 1.1K jobs were lost in the “Oil and Gas Extraction” industry: this is lower than the downward revised number of 1.8K in January, and adds up to only 2900 jobs lost in 2015.

As a reminder, this is what Challenger said just yesterday:

US-based employers announced workforce reductions totaling 50,579,…..
Employers announced 103,620 planned layoffs through the first two months of 2015, which is up 19 percent from the 86,942 job cuts recorded during the same period in 2014.
Once again, the energy sector saw the heaviest job cutting in February, with these firms announcing 16,339 job cuts, due primarily to oil prices.

Falling oil prices have been responsible for 39,621 job cuts, to date. That represents 38 percent of all recorded workforce reductions announced in the first two months of 2015. In February, 36 percent of all job cuts (18,299) were blamed on oil prices.

“Oil exploration and extraction companies, as well as the companies that supply them, are definitely feeling the impact of the lowest oil prices since 2009. These companies, while reluctant to completely shutter operations, are being forced to trim payrolls to contain costs,” said John A. Challenger, chief executive officer of Challenger, Gray & Christmas.

It even provided a handy chart to understand which is the weakest sector in the US economy right now, which as we said yesterday, “is the one chart that the BLS, if it ignored everything else, should look at.”

As a result, this is what the job losses in the energy sector look like based on the calculation of the BLS and of Challenger, which actively counts the layoffs, and has no White House-driven agenda to paint a rosier than reality picture.

One wonders: just what is the BLS waiting for to finally admit the real picture in the energy sector (and frankly, just what is the methodology used by the BLS to calculate “jobs” if it is failing so miserably to account for what is clearly happening) and will it serve the steaming surprise pile just after the Fed decides to hike rates some time in the coming months?

Initial Jobless Claims Surge To 10 Month Highs, Worst Start To A Year Since 2009

Following this morning’s dire Challenger Job Cuts data, it appears the hard reality that lower oil prices are not unambiguously good for America is setting in. Initial Jobless Claims surged last week (after a big jump the week before) to 320k (far worse than the 295k expectation) to the highest since May 2014. Non-seasonally-0adjusted claims surged 29,361 to 310,000 making 2015 the worst start to the year for claims since 2009. Continuing Claims also rose. Since the end of QE3 and the end of the government’s fiscal year, the trend of improvment has clearly ended and a new regime of weakening labor markets has begun.

The trend has changed…

• For more on the job market:

This Is Why Hewlett-Packard Is Firing 58,000

RBS could cut 14,000 staff in retreat from US and Asia

Target to cut jobs as part of $2B cost-savings plan

4 thoughts on “Americans Not In The Labor Force Rise To Record 92.9 Million As Participation Rate Declines Again”