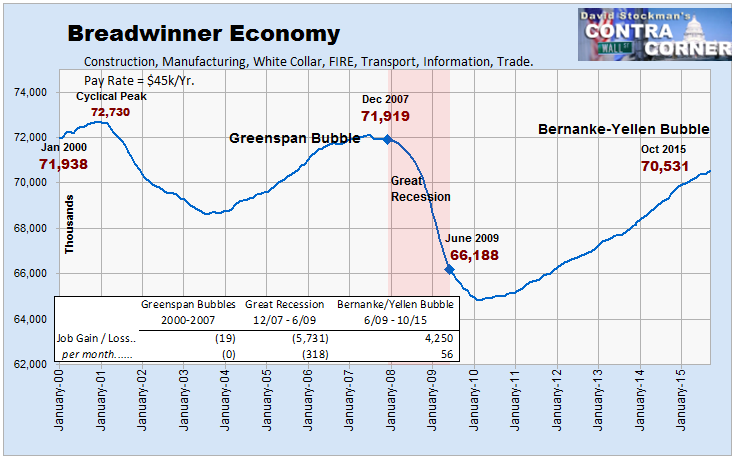 If the clowns paraded out on CNBC keep calling October’s Job Report a “strong one” will that make it so? Thanks to Dr. Paul Craig Roberts we’ll save some precious time and let him rip it to shreds……and then David Stockman & Peter Schiff…..

The Bureau of Labor Statistics announced Friday that the US economy created 271,000 jobs in October, a number substantially in excess of the expected 175,000 to 190,000 jobs. The unexpected job gain has dropped the unemployment rate to 5 percent. These two numbers will be the focus of the financial media presstitutes.

What is wrong with these numbers? Just about everything.

Next, consider who got the 271,000 reported jobs. According to the Bureau of Labor Statistics, all of the new jobs plus some—378,000—went to those 55 years of age and older. However, males in the prime working age, 25 to 54 years of age, lost 119,000 jobs. What seems to have happened is that full time jobs were replaced with part time jobs for retirees. Multiple job holders increased by 109,000 in October, an indication that people who lost full time jobs had to take two or more part time jobs in order to make ends meet.

Now assume the 271,000 reported jobs in October is the real number, and not 126,000 or less, where are those jobs? According to the BLS not a single one is in manufacturing(0). The jobs are in personal services, mainly lowly paid jobs such as retail clerks, ambulatory health care service jobs, temporary help, and waitresses and bartenders.

For example, the BLS reports 44,000 new retail trade jobs, a questionable number in light of sluggish real retail sales. Possibly what is happening is that stores are turning a smaller number of full time jobs into a larger number of part time jobs in order to avoid benefit costs associated with full time workers.

The new reported jobs are essentially Third World type of jobs that do not produce sufficient income to form a household and do not produce exportable goods and services to help to bring down the large US trade deficit resulting from jobs offshoring.

The bullion banks acting as agents of the Federal Reserve used the phony jobs number to launch another attack on gold and silver bullion, dumping uncovered shorts into the futures market. The strong jobs number provides cover for the naked shorts, because it implies an interest rate hike and movement out of bullion into interest bearing assets.

If the US economy were actually in economic recovery, would half of the 25-year-old population be living with parents? The real job situation is so poor that young people are unable to form households.

No, it wasn’t a “blow-out” jobs report. Inside the artificially bloated, trend-cycle adjusted headline number was the same old BLS con job and an economically devastating shortfall where it really counts. Namely, the US economy still has 2% fewer breadwinner jobs than it did 94 months ago at the pre-crisis peak in December 2007.

Actually, its worse. As is blindingly clear from the chart below, last month’s purportedly “awesome” jobs report contained 1.4 million fewer breadwinner jobs than existed way back in the very first month of this century!

So that’s not an awesome labor market; its the measure of a sick economy.

Indeed, the October pattern was even worse than normal. To wit, the reported number of high pay, high productivity jobs in mining, energy and manufacturing declined by 4,000, while the count of low-pay, part-time waiters and bartenders soared by 41,000.

Yes, the “Leisure and Hospitality” category of the BLS survey is somewhat broader——it also includes bellhops, hotel maids, parking attendants, hot dog vendors, stadium maintenance crews and the rest of the lodging and entertainment complex. These are all worthy and necessary endeavors, but they are mostly gigs, not jobs.

During October the average workweek in Leisure and Hospitality was just 26.3 hours. As a purely mathematical matter this means that a significant proportion of the job count in this category likely involved less than 20 hours per week of paid work.

Likewise, average gross earnings were just $380 per week compared to $1,035 in manufacturing, $1,385 in mining and energy and $1,604 in the utilities category. On an annualized basis, the latter category amounts to $83K, while the leisure and hospitality weekly rate annualizes to $19k or 77% less.

So there are jobs, there are gigs and there is a wide range of economic differentiation in between. But the notion that you can treat all jobs slots as economic equivalents, add them up and get anything more than statistical noise surely strains credulity.

Needless to say, this dubious metric has become the focal point of a monthly media feeding frenzy and the apparent #1 guidepost for central bank policy action. So with dumbing down like that it is virtually certain that the next economic and financial storm will come as a complete shock……

In any event, I seriously doubt that 41,000 Leisure and Hospitality Jobs were actually created last month——owing to the blatant statistical finagling by the BLS called trend cycle adjustment. Indeed, the smoking gun is right here in the waiters and bartenders count……

It is not surprising, therefore, that the so-called financial press actually treats these utterly fudged and manipulated monthly job change deltas seriously. That is apparently their job—–to applaud the Fed’s acumen in enabling the expansion and to underscore its essential role in preventing any downturn from plunging into a permanent depression……

In any event, last month also saw a gain of 44,000 retail clerks and 25,000 temps. So if you add these categories plus household and personal service workers to Leisure and Hospitality you get a broad grouping I’ve labeled as the “Part-Time Economy”.

In a word, last month’s results were essentially the story of the 21st century to date. The BLS survey posted 119,00 more of these jobs last month, and has gained 5 million of such jobs slots since January 2000.

Yet since these gigs annualize to less than $20,000 per year or just 40% of the median income what does a modest uptick here have to do with the real jobs story? That is, with the steady bleed-off of real full-time, full-pay jobs during that same 16-year period?

……..There is absolutely nothing awesome about that, nor about the Fed’s destructive attempts to make it better. In fact, when the current ZIRP/QE fueled financial bubble splatters it is virtually certain that the line on the chart below will plunge once again to its turn of the century level.

Stated differently, as the coming recession unfolds the Fed will have succeeded in crushing both savers and workers at the same time. Maybe then the torches and pitchforks will converge on the Eccles Building……..at last.

Fed Made Everything Worse and Rate Hike Will Prove It

2 thoughts on ““Another Phony Jobs Number””