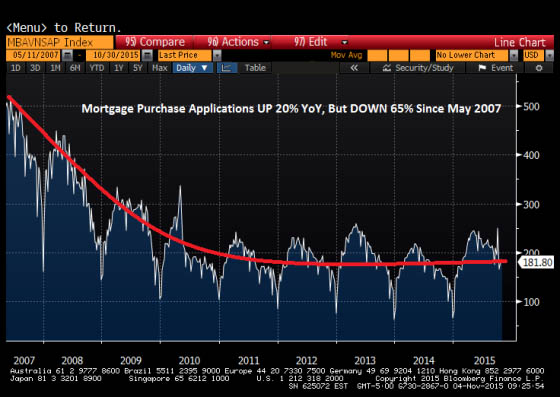 from Jim Quinn of The Burning Platform

The housing recovery without mortgage originations is coming to its inevitable conclusion. The Fed, Wall Street bankers and the US Treasury have been able to increase national home prices by 30%, with 50% to 100% in some bubble markets, using 0% interest rates, a massive buy and rent scheme, withholding foreclosures from the market, encouraging foreign cash buying, and allowing flippers back into the market. In a real free market would home prices go up by 30% while mortgage originations remained flat for the last four years?

Thirty year mortgage rates have been falling for the last 30 years. They bottomed at 3.35% in late 2012. Since then they rose as high as 4.4% in early 2014. They fell to 3.6% by early 2015 and are now hovering in the 3.8% range. Everyone who had a high interest mortgage loan, including those with underwater mortgages, have refinanced to a lower rate. The economic boost to the economy from the lower mortgage payments is over. The Obamacare costs have spent the mortgage payment savings. The combination of declining real household income, overpriced homes, millennials with massive levels of student loan debt, and now rising mortgage rates are putting a halt to this fake Fed recovery scheme.

The Fed believes they must increase rates by .25% in December to regain a semblance of credibility. Mortgage rates will immediately rise. The government is now desperately trying to keep the balls in the air by allowing low income buyers to purchase homes with only 3% down. Freddie, Fannie and the FHA are guaranteeing these loans with your tax dollars. All three agencies are already insolvent, so what’s another few hundred billion of losses hoisted on the backs of taxpayers? Anything to keep the farce of an economic recovery story line alive for a little while longer.

At this point there is no scenario that turns out positive for the housing market. If the Fed has the guts to raise rates, the housing market will tank because mortgage rates will rise. If the Fed chickens out again, it will be because the economy is clearly in recession and demand for overpriced homes will plummet as unemployment rises. Home prices have risen so far above fair value at this point, the market is already beginning to topple.

Flippers are getting stuck with houses they can’t flip for a profit. Hedge funds have stopped buying and have begun selling. Anyone dumb enough to have been lured into this market in the last few years will be underwater in no time. The foreclosure train will be leaving the station shortly. We’ve been here before. It was ten years ago. Some people never learn. I wonder what the oligarchs will pull out of their hats after housing bubble part deux pops.