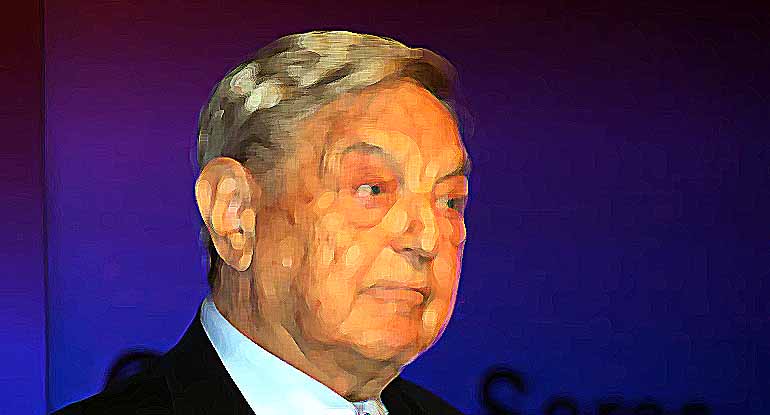 by Wayne Madsen via Strategic-Culture.org,

Defeated Democratic presidential candidate Hillary Rodham Clinton is not about to «go quietly into that good night». On the morning after her surprising and unanticipated defeat at the hands of Republican Party upstart Donald Trump, Mrs. Clinton and her husband, former President Bill Clinton, entered the ball room of the art-deco New Yorker hotel in midtown Manhattan and were both adorned in purple attire. The press immediately noticed the color and asked what it represented. Clinton spokespeople claimed it was to represent the coming together of Democratic «Blue America» and Republican «Red America» into a united purple blend. This statement was a complete ruse as is known by citizens of countries targeted in the past by the vile political operations of international hedge fund tycoon George Soros.

The Clintons, who both have received millions of dollars in campaign contributions and Clinton Foundation donations from Soros, were, in fact, helping to launch Soros’s «Purple Revolution» in America. The Purple Revolution will resist all efforts by the Trump administration to push back against the globalist policies of the Clintons and soon-to-be ex-President Barack Obama. The Purple Revolution will also seek to make the Trump administration a short one through Soros-style street protests and political disruption……

…..No sooner had Trump been declared the 45th president of the United States, Soros-funded political operations launched their activities to disrupt Trump during Obama’s lame-duck period and thereafter. The swiftness of the Purple Revolution is reminiscent of the speed at which protesters hit the streets of Kiev, the Ukrainian capital, in two Orange Revolutions sponsored by Soros, one in 2004 and the other, ten years later, in 2014.

The Soros-financed Russian singing group «Pussy Riot» released on YouTube an anti-Trump music video titled «Make America Great Again». The video went «viral» on the Internet. The video, which is profane and filled with violent acts, portrays a dystopian Trump presidency. Following the George Soros/Gene Sharp script to a tee, Pussy Riot member Nadya Tolokonnikova called for anti-Trump Americans to turn their anger into art, particularly music and visual art. The use of political graffiti is a popular Sharp tactic. The street protests and anti-Trump music and art were the first phase of Soros’s Purple Revolution in America.

President-elect Trump is facing a two-pronged attack by his opponents. One, led by entrenched neo-con bureaucrats, including former Central Intelligence Agency and National Security Agency director Michael Hayden, former Homeland Security Secretary Michael Chertoff, and Bush family loyalists are seeking to call the shots on who Trump appoints to senior national security, intelligence, foreign policy, and defense positions in his administration. These neo-Cold Warriors are trying to convince Trump that he must maintain the Obama aggressiveness and militancy toward Russia, China, Iran, Venezuela, Cuba, and other countries. The second front arrayed against Trump is from Soros-funded political groups and media. This second line of attack is a propaganda war, utilizing hundreds of anti-Trump newspapers, web sites, and broadcasters, that will seek to undermine public confidence in the Trump administration from its outset.

One of Trump’s political advertisements, released just prior to Election Day, stated that George Soros, Federal Reserve chair Janet Yellen, and Goldman Sachs chief executive officer Lloyd Blankfein, are all part of «a global power structure that is responsible for the economic decisions that have robbed our working class, stripped our country of its wealth and put that money into the pockets of a handful of large corporations and political entities. Soros and his minions immediately and ridiculously attacked the ad as anti-Semitic. President Trump should be on guard against those who his campaign called out in the ad and their colleagues. Soros’s son, Alexander Soros, called on Trump’s daughter, Ivanka, and her husband Jared Kushner, to publicly disavow Trump. Soros’s tactics not only seek to split apart nations but also families. Trump must be on guard against the current and future machinations of George Soros, including his Purple Revolution.

Seemingly unwilling to accept the results of the democratic selection of the nation’s leader for the next four years, hundreds of grieving Hillary Clinton supporters – egged on by George Soros’ MoveOn.org – are laying siege to Trump Tower in New York City. Screaming “Fuck Donald Trump”, yelling “Not My President”, chanting “Pussy Grabs Back”, and burning the American flag, it appears these young millennials are just the kind of deplorables this country should be proud of…

As NBC’s Katy Tur exclaimed “It’s surreal in NYC. People are walking around like zombies with thousand yard stares.”

Leaked funding documents reveal an effort by George Soros and his foundations to manipulate election laws and process rules ahead of the federal election far more expansively than has been previously reported.

The billionaire and convicted felon moved hundreds of millions of dollars into often-secret efforts to change election laws, fuel litigation to attack election integrity measures, push public narratives about voter fraud, and to integrate the political ground game of the left with efforts to scare racial minority groups about voting rights threats.

These Soros-funded efforts moved through dozens of 501(c)(3) and (c)(4) charities and involved the active compliance with civil rights groups, government officials, and purportedly non-partisan groups like the League of Women Voters.

The leaked documents also reveal deliberate and successful efforts to manipulate media coverage of election issues in mainstream media outlets like the The New York Times.

…..The documents reveal that the Soros campaign fueled litigation attacking election integrity measures, such as citizenship verification and voter ID. It funded long-term efforts to fundamentally transform election administration — including the creation of databases that were marketed to state governments for use in voter verification. It propped up left-leaning media to attack reports of voter fraud, and conducted racially and ideologically targeted voter registration drives.

Ever wonder who is behind all the lawsuits filed to overturn state voter ID laws?  Those lawsuits are very expensive, after all, racking up 1,000’s of billable hours from some very high-end law firms.  Well, courtesy of the 2,500 documents recently released by DC Leaks, we now know that George Soros is funding the legal fees as part of his stated goal to “enlarge [the U.S.] electorate by at least 10 million voters” by 2018.

According to J. Christian Adams, president of the Public Interest Legal Foundation, a nonprofit law firm that litigates to defend election integrity, Soros is doing everything possible to “fundamentally transform American elections.”  Per the Washington Free Beacon:

“George Soros is involved in every aspect of manipulating the rules of American elections,” Adams told the Washington Free Beacon. “From funding Pew’s efforts to centralize election administration, to fueling litigation that attacks election integrity laws, to fanning the flames of racial agitation and polarization, Soros dollars are doing all they can to fundamentally transform American elections.”

Who Is Behind The Riots? Charlotte Police Says 70% Of Arrested Protesters Had Out Of State IDs

As shocking as this statement is, it should not be a total surprise. 18 months ago, as the riots flared in Ferguson, there was one man pulling the strings of this ‘domestic false flag’… George Soros. In an apparent effort to  “keep the media’s attention on the city and to widen the scope of the incident to focus on interrelated causes — not just the overpolicing and racial discrimination narratives that were highlighted by the news media in August,”liberal billionaire George Soros donated $33million to social justice organizations which helped turn events in Ferguson from a local protest into a national flashpoint.

As The Washington Times explains,

There’s a solitary man at the financial center of the Ferguson protest movement. No, it’s not victim Michael Brown or Officer Darren Wilson. It’s not even the Rev. Al Sharpton, despite his ubiquitous campaign on TV and the streets.

Rather, it’s liberal billionaire George Soros, who has built a business empire that dominates across the ocean in Europe while forging a political machine powered by nonprofit foundations that impacts American politics and policy, not unlike what he did with MoveOn.org.

Mr. Soros spurred the Ferguson protest movement through years of funding and mobilizing groups across the U.S., according to interviews with key players and financial records reviewed by The Washington Times.

Still not buying it? As The New American recently reported, Ken Zimmerman, the director of U.S. programs at Soros’s Open Society Foundations (OSF), denied last year that Soros had funded BLM, saying it was just a rumor.

That was before hackers with DCLeaks.com published OSF documents showing that the Soros group had already given at least $650,000 directly to BLM.

Those same documents reveal the reason for OSF bankrolling BLM: the “dismantling” of America so that it can be recast according to the vision of Soros and his leftist cohorts.

The communist-on-its-face nature of these and other demands of the organizations under the BLM umbrella are a clear indicator of the real intent of BLM. The deep-pocketed funding by the likes of Soros, the Center for American Progress, the Ford Foundation, and Borealis Philanthropy show that BLM is the means, not the end.

BLM is little more than a tool of social revolutionaries hell-bent on destroying America so they can build their long awaited dystopia which they attempt to pass off as a utopia.

How George Soros Singlehandedly Created The European Refugee Crisis – And Why