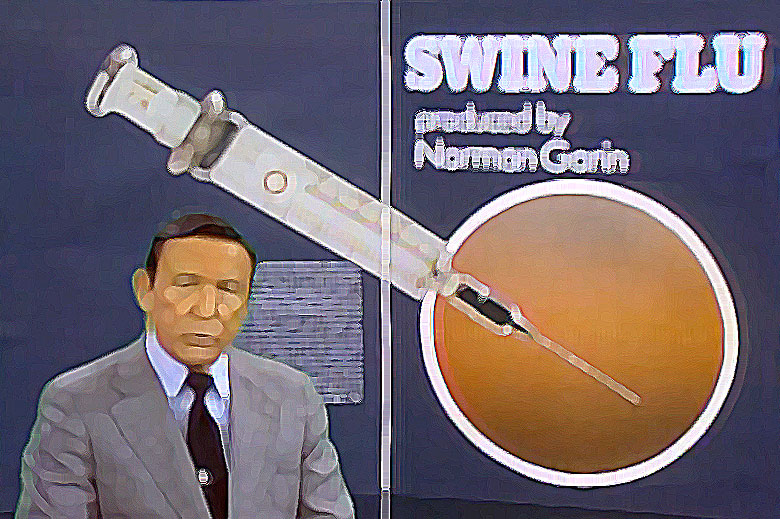 Let’s take pause and look back.  Back to a day when there was actual journalism being practiced – CBS investigative news program ’60 Minutes’ on  the 1976 swine flu scare.  Aired on Nov. 4, 1979

Mike Wallace exposes the Swine Flu Pandemic fraud of 1976. This fraud was committed by government, the CDC and drug companies in order to sell vaccines.

About 40 Million people in the USA were convinced to take the vaccine. Over 4,000 people experienced devastating side effects, including deaths.

Only one person was known to have died from the actual flu itself. While hundreds filed claims of death of their loved ones who died as a result of vaccine side effects.

One person was known (it was believed) to have died from the actual flu itself, a soldier at Fort Dix in New Jersey, where the outbreak occurred. Four other soldiers recovered completely without any shot.

Dr. David Sensor, then head of the CDC (now in private industry) devised the Swine Flu program and pushed it. He began to give flu shots to the American people October 1, 1976. By that time there had been several reported cases of swine flu around the world but none confirmed.

The actual vaccine given had never been tested…….(watch him squirm in the video above at 7:15)

Dr. Michael Hadwick had warned of neurological complications, disorders and illness associated with the injection of the influenza vaccine. His recommendations were ignored, concealed and withheld.

Before you run out to roll up your sleeve, take a deeper look at just how Pfizer, Moderna Astra Zeneca and the others have been able to claim such miraculous success in such a short amount of time.

Who monitored the their testing? Oh, they did their own, that makes it much tougher I’m sure. It sounds all too familiar.

Please check back soon for a deeper dive into the miraculous expose’ on our current batch vaccine heroes.

Below a look at more of the propaganda of the Swine Flu Fraud.