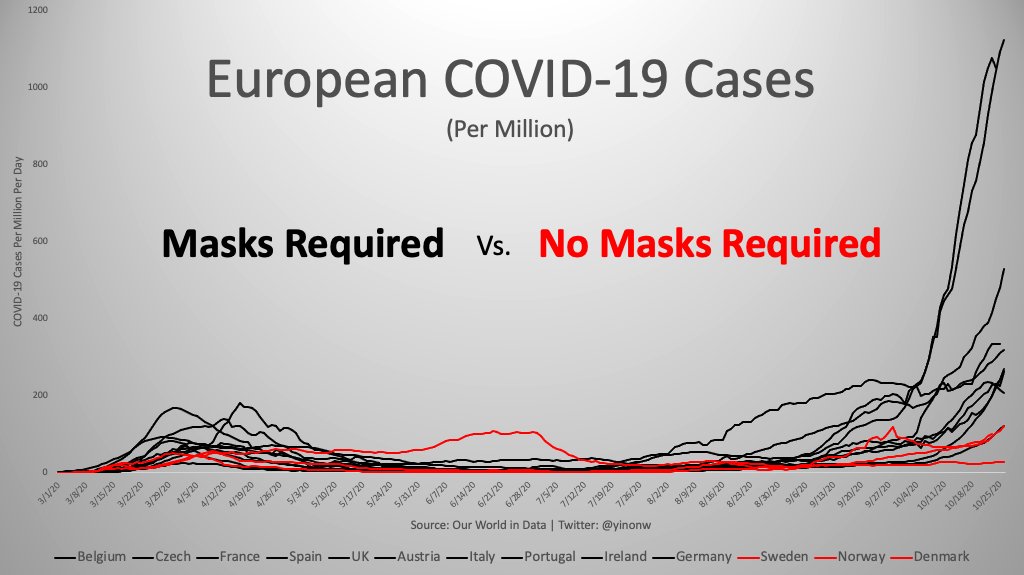 from mercola via the smokingman

The “fog of war” is a term used to describe the uncertainty, chaos and confusion that can occur during battle. What you thought was true entering into the battle may be turned upside down, clouding your judgment as you try to make decisions in a sort of suspended reality.

You’re living in a fog of war right now — a fog of COVID war — according to Jeffrey Tucker, editorial director of the American Institute for Economic Research (AIER): “It is often unclear who is making decisions and why, and what the relationships are between the strategies and the goals. Even the rationale can become elusive as frustration and disorientation displace clarity and rationality.”

This description is typically reserved for the disorientation of battle but now applies disturbingly well to the fog surrounding COVID-19 disease mitigation. If you’d like a concrete example, watch the video timeline above, which takes you from January 2020, when mask use was discouraged, to December 2020, when masks have become mandatory in many areas

In February 2020, Christine Francis, a consultant for infection prevention and control at the World Health Organization headquarters, was featured in a video, holding up a disposable face mask. She said, “Medical masks like this one cannot protect against the new coronavirus when used alone … WHO only recommends the use of masks in specific cases.”

Those specific cases include if you have a cough, fever or difficulty breathing. In other words, if you’re actively sick and showing symptoms. “If you do not have these symptoms, you do not have to wear masks because there is no evidence that they protect people who are not sick,” she continued.

In March 2020, the U.S. Surgeon General publicly agreed, tweeting a message stating, “Seriously people — STOP BUYING MASKS!” and going on to say that they are not effective in preventing the general public from catching coronavirus. As of March 31, 2020, WHO was still advising against the use of face masks for people without symptoms, stating that there is “no evidence” that such mask usage prevents COVID-19 transmission.

By June 6, 2020, the rhetoric had changed. Citing “evolving evidence,” WHO reversed their recommendation, with Tedros Adhanom Ghebreyesus, WHO’s director general, advising governments to encourage the general public to wear masks where there is widespread transmission and physical distancing is difficult.

This encouragement turned into mandates in many areas, with threats of fines for those who did not comply. In Humboldt County, California, for instance, anyone who violated the order to wear face coverings in public could be fined $50 to $1,000 and/or face 90 days in jail for each day the offense occurred.

In Salem, Massachusetts, you could also be fined for not wearing a mask in public, including the common areas inside an apartment building. What’s the evolving evidence WHO referred to that made them reverse their position on masks for the healthy general public over a period of just two months? This remains unclear, but an interesting development did occur.

During a June 8, 2020, press briefing — just two days after Ghebreyesus advised healthy people to start wearing masks — Maria Van Kerkhove, WHO’s technical lead for the COVID-19 pandemic, made it very clear that people who have COVID-19 without any symptoms “rarely” transmit the disease to others.

WHO’s interim guidance from June 5, 2020, supports Kerkhove’s statement, noting, “Comprehensive studies on transmission from asymptomatic individuals are difficult to conduct, but the available evidence from contact tracing reported by Member States suggests that asymptomatically-infected individuals are much less likely to transmit the virus than those who develop symptoms.”

If this is the case, though, the recommendation that healthy, asymptomatic people wear face masks or be locked down in their homes makes no sense, highlighting just one instance of the ongoing “COVID fog.”

Not to be called out on their blatant contradictions, on June 9, 2020, Dr. Mike Ryan, executive director of WHO’s emergencies program, quickly backpedaled Van Kerkhove’s statement, saying the remarks were “misinterpreted or maybe we didn’t use the most elegant words to explain that.” Van Kerkhove also stated that the data she mentioned only came from a “small subset of studies,” and added:

“I wasn’t stating a policy of WHO or anything like that. I was just trying to articulate what we know. And in that, I used the phrase ‘very rare,’ and I think that that’s misunderstanding to state that asymptomatic transmission globally is very rare.”

10 Million People, Not One Case of Asymptomatic Transmission

After WHO’s asymptomatic spread debacle, talk of this topic died down considerably. But, quietly, a landmark study involving 9,899,828 million residents of Wuhan, China, was published in Nature Communications. The participants were tested for COVID-19 between May 14, 2020, and June 1, 2020.

Additionally, of the 34,424 participants with a history of COVID-19, 107 individuals (0.31%) tested positive again, but, importantly, none were symptomatic. As noted by the authors, “Virus cultures were negative for all asymptomatic positive and repositive cases, indicating no ‘viable virus’ in positive cases detected in this study.” Tucker explained:

“The conclusion is not that asymptomatic spread is rare or that the science is uncertain. The study revealed something that hardly ever happens in these kinds of studies. There was not one documented case. Forget rare. Forget even Fauci’s previous suggestion that asymptomatic transmission exists but does not drive the spread. Replace all that with: never. At least not in this study for 10,000,000.”

In a preprint version of their study, the researchers noted, “Our estimates of the proportion of asymptomatic cases and their transmission rates suggest that asymptomatic spread is unlikely to be a major driver of clusters or community transmission of infection …” As Tucker noted:

“We keep hearing about how we should follow the science. The claim is tired by now. We know what’s really happening.

The lockdown lobby ignores whatever contradicts their narrative, preferring unverified anecdotes over an actual scientific study of 10 million residents in what was the world’s first major hotspot for the disease we are trying to manage. You would expect this study to be massive international news. So far as I can tell, it is being ignored.”

If Asymptomatic Spread Is Rare, Why Masks and Lockdowns?

Now, as people are increasingly eager to return to some sense of normalcy, a mutated SARS-CoV-2 strain, which is supposedly more virulent, is said to have emerged and resulted in new, more severe lockdown restrictions in the U.K.

This perpetuation of fear has extended far beyond the initial purpose of the lockdowns, which was to flatten the curve and avoid overstressing hospitals. As Tucker pointed out, however, this has gradually changed such that now we’re facing lockdowns indefinitely:

“The initial round of lockdowns was not about suppressing the virus but slowing it for one reason: to preserve hospital capacity. Whether and to what extent the ‘curve’ was actually flattened will probably be debated for years but back then there was no question of extinguishing the virus. The volume of the curves, tall and quick or short and long, was the same either way. People were going to get the bug until the bug burns out (herd immunity).

Gradually, and sometimes almost imperceptibly, the rationale for the lockdowns changed. Curve flattening became an end in itself, apart from hospital capacity. Perhaps this was because the hospital crowding issue was extremely localized in two New York boroughs while hospitals around the country emptied out for patients who didn’t show up: 350 hospitals furloughed workers.”

Science is what should be used to dictate policy, but this isn’t what’s occurring. Ongoing testing of asymptomatic people is adding to the problem, as positive reverse transcription polymerase chain reaction (RT-PCR) tests are also being used as justification for keeping large portions of the world locked down.

The problem is a positive PCR test does not mean that an active infection is present. The PCR swab collects RNA from your nasal cavity. This RNA is then reverse transcribed into DNA. However, the genetic snippets are so small they must be amplified in order to become discernible.

What this does is amplify any, even insignificant sequences of viral DNA that might be present to the point that the test reads “positive,” even if the viral load is extremely low or the virus is inactive. These “positive” cases are keeping the pandemic narrative going.

Case in point, between March 22 and April 4, 2020, 215 pregnant women admitted to a hospital in New York City were screened on admission for symptoms of COVID-19 and tested for the virus. Only 1.9% of the women had fever or other COVID-19 symptoms, and all of those women tested positive.

Of the remaining women who were tested even though they had no symptoms, 13.7% were positive. This means that, overall, 87.9% of the women who tested positive for SARS-CoV-2 had no symptoms, and the overwhelming research suggests they likely wouldn’t have transmitted the virus to others, either.

What does the science say about masks for preventing COVID-19 infection? The first randomized controlled trial of more than 6,000 individuals to assess the effectiveness of surgical face masks against SARS-CoV-2 infection found masks did not statistically significantly reduce the incidence of infection.

The “Danmask-19 Trial,” published November 18, 2020, in the Annals of Internal Medicine, found that among mask wearers 1.8% (42 participants) ended up testing positive for SARS-CoV-2, compared to 2.1% (53) among controls. When they removed the people who reported not adhering to the recommendations for use, the results remained the same — 1.8% (40 people), which suggests adherence makes no significant difference.

The findings further call into question the effectiveness of mandated masks for preventing COVID-19, as does a case-control investigation of people with COVID-19 who visited 11 U.S. health care facilities. The U.S. Centers for Disease Control and Prevention report revealed factors associated with getting the disease, including the use of cloth face coverings or masks in the 14 days before becoming ill.

Taken together, this shows that, of the symptomatic adults with COVID-19, 70.6% always wore a mask and still got sick, compared to 7.8% for those who rarely or never did.

Seeing Through the Fog

An abundance of evidence suggests that locking down the healthy and mandating mask usage for those without symptoms is irrational, at best, and dangerous, at worst, considering both masks and lockdowns are associated with ill effects of their own. According to Tucker:

“With solid evidence that asymptomatic spread is nonsense, we have to ask: who is making decisions and why? Again, this brings me back to the metaphor of fog. We are all experiencing confusion and uncertainty over the precise relationship between the strategies and the goals of panoply of regulations and stringencies all around us.

Even the rationale has become elusive – even refuted – as frustration and disorientation have displaced what we vaguely recall as clarity and rationality of daily life.”

Living in such a fog can be intimidating, but the purpose of this article is not to spread more fear but, rather, to empower you with information. The fog of war, after all, is not always an impediment. It can also be used to gain advantage, and seeing through the fog is the first step to winning the war.