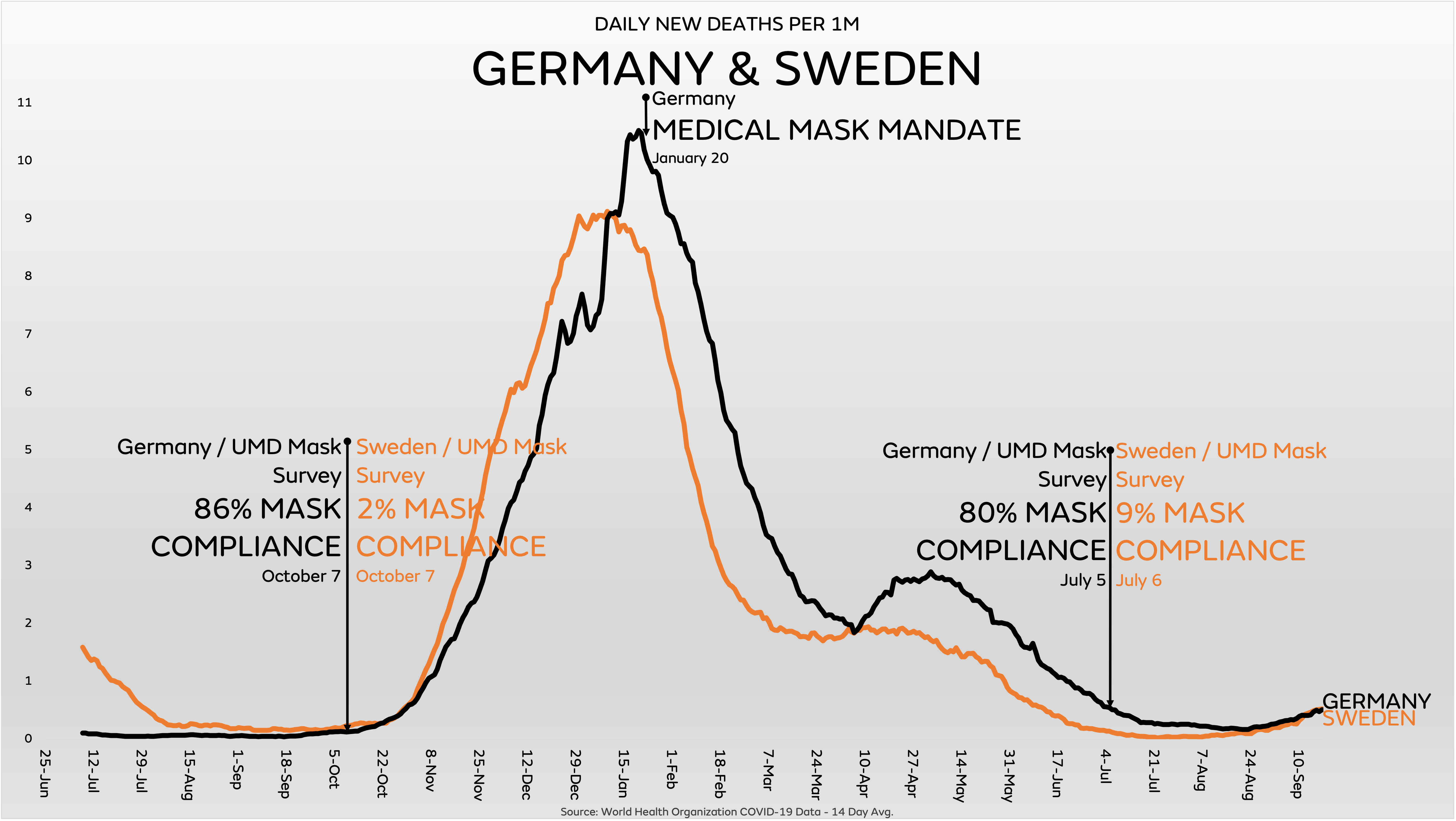 Every Comparison Shows Masks Are Meaningless

Does it matter to anyone in charge? Of course not!

Sanity, intellectual honesty, critical thinking and rationality are dead. The COVID response killed those qualities and purposefully discouraged and disparagingly labeled anyone who still engages with them.

For anyone who has paid even the slightest amount of attention to the world over the past eighteen and a half months, this is not news. But it’s still infuriating.

COVID response has eliminated the ability of countries to function as coherent, livable societies. It’s led to purposeful misinformation from media outlets, and immediately disproven expert claims mindlessly repeated by the press.

As we’ve seen throughout the United States (and the rest of the world), local health officials are some of the worst perpetrators of intellectual dishonesty and purposeful ignorance.

They exist in groupthink echo chambers and live in fear of attracting media attention for not doing exactly as activist reporters demand.

One of the most persistent media demands is mask mandates. So much so that Kentucky’s Governor Andy Beshear pointed out in an interview earlier this month that had he not been stripped of emergency powers, he’d have mandated masks again:

A few weeks ago, Kentucky Governor Andy Beshear said that requiring masks is “just basic science” and due to their “dire” situation, he would have reinstated a mask mandate already if he could

At least be honest, Andy…just admit you’re a coward and say what you actually mean: “I really wanted to avoid media criticism by following incompetent expert advice, but the meanies in the legislature wouldn’t let me.”

But perhaps the most infuriating aspect of the current dismissive attitude towards rationality, intelligence, critical thinking and intellectual honesty is that anyone willing to look at recently accumulated data would have to acknowledge the clear lack of impact from mask mandates.

Acknowledging that there’s been no impact would destroy any possible justification for the continuation of mask mandates, which is why they mustignore it and further end the Age of Enlightenment.

Let’s run through some examples.

A wonderfully clear example of the pointlessness of mask mandates comes from Beshear’s own Kentucky.

Neighboring Tennessee has had different mask rules at different times, with no statewide mandate and the removal of local mask mandates in late April. Yet for all of 2021, their trends have been nearly identical:

Not only did Tennessee not have a statewide mandate at any point during this time period, many counties did not have mandates and in late April, Governor Bill Lee removed the authority of local officials to implement their own mask rules. Kentucky, meanwhile, had a statewide mandate in effect until mid-June, and lifted it a month and a half after Tennessee.

None of it mattered. The trends are the same. The numbers are remarkably similar. Masks made no difference. They never do.

It’s the same story that’s played out in Louisiana, Arkansas and Mississippi.

Louisiana reinstated a mask mandate in early August, while Arkansas and Mississippi did not. The trends are nearly identical regardless — in fact, here are the three states, unlabeled. Good luck guessing which one brought the curve down with masks:

You just wonder what would happen if a single media member asked politicians about this. How amazing would that be?

Reporter: “You mandated masks, while your neighboring states did not. There has been no significant difference whatsoever in the trajectory or severity of the curves in the neighboring states. Why do you think that is?”

Reporter: “Ok, but do you have a reason that doesn’t involve mindless appeals to an authority that has been wrong about nearly everything since the pandemic started?”

Governor: “I, uh…I just…uh…masks work, so wear a mask”

Reporter: “That’s not an answer, it’s just deflecting. Was this the result you expected to see when you mandated masks?”

It’s not just states showing no difference in rates or trajectories, drilling down to the county level highlights the same trends.

Perhaps the clearest example of the delusional political obsession with pretending masks matter is found in Southern California.

We can likely thank the recall effort for the ability to make this comparison, as the state would have almost assuredly mandated masks as soon as cases rose in the summer. Instead, only some of the true believers in anti-science like Los Angeles mandated masks. So, thankfully, we can compare them to neighboring Orange County, where there’s no mask mandate and little to no mask wearing in most locations:

Unsurprisingly, Los Angeles has had higher case rates and failed to bring the curve down earlier — they peaked on essentially the same day. Masks made no difference.

It’s the same story for the true believers in Chicago, where the entire region highlights the uselessness of mask mandates:

Neighboring states Nevada and Arizona, unsurprisingly, have followed very similar hospitalization curves for the past year.

Nevada, due in part to their Governor’s unending commitment to pseudoscience, has had a mask mandate in place for most population centers for two months now, while Arizona has not. Theoretically, if masks worked, you’d expect to see a difference, given how similar the curves have been for literally an entire year.

Did masks have had a significant impact? I’ll give you three guesses.

Of course not! Why would they show an impact when they haven’t anywhere else?!

Not only has Arizona seen fewer population adjusted hospitalizations every single day since they removed local mask mandates in late March, there’s been no difference in trajectory either, with peaks falling within days of each other, just as they did over the winter.

We can also look at Colorado, where, unsurprisingly, the enclaves of anti-science from Aspen and Boulder have reinstated their mask mandates.

Before going into the data, it’s important to pause and highlight how the cycle of symbiotic misinformation works between local “health leaders” and the media.

A news story published in the Aspen Daily News covering the continuing mask mandate, despite how useless it’s proven to be, includes this outstanding logical fallacy from Aspen Valley Hospital CEO Dave Ressler:

Ressler also pushed back against any notion among community members that requiring face coverings indoors — which the county has done since Sept. 16 — had not been impactful or necessary.

“I think that would be a mistake. We don’t know what these numbers would have done had those additional precautions … not been taken,” Ressler said. “So, please take that into account.”

Unbelievable. It’s as if they’re regurgitating falsehoods from the dumbest common denominator on Twitter.

Well, you might be thinking, someone must have pushed back against this delusional nonsense by pointing out that Ressler doesn’t know if the numbers would have been better WITHOUT masks? Of course not! Here’s the next section:

Pitkin County has fielded criticism for reinstituting the indoor mask mandate after large-scale events like the Jazz Aspen Snowmass Labor Day Experience in Snowmass Village and the Food & Wine Classic in Aspen had already finished up earlier this month.

Nope. Pitkin predictably received criticism for not mandating masks SOONER. No questioning of the nonsensical logical fallacy from a literal hospital CEO. Just repetitive criticism by fanatical zealots obsessed with publicly signaling virtue while ignoring the evidence that masks have had no impact whatsoever on the spread of COVID.

That’s the symbiotic circle; health officials make delusional, inaccurate claims, reporters, desperate to push the groupthink agenda, uncritically repeat the insanity instead of asking tough questions, and the public is repeatedly feed misinformation from sources they believe they should trust.

So with all that said, let’s look at how Aspen has done compared to its neighboring counties:

Yup, no impact. As always. Pitkin is indistinguishable from its neighbors.²Masks didn’t matter. Again.

Now we can turn our attention to Boulder County and compare it to nearby Denver, where there is no mask mandate:

Can’t tell which one has a mask mandate and which one doesn’t? Neither can politicians and the media!

And of course, there’s old favorites Oregon and Washington state, some of the most zealous mask devotees on earth.

Does anyone care enough to ask Kate and Jay why none of their policies seem to matter? Of course not!

And just for fun, here’s a reminder of what’s happened in Germany and Sweden over the past fifteen months:

Masks are simply a political get out of jail free card; a chance for terrified Governors and local officials to avoid instigating the wrath of incompetent media figures incapable of forming an original or unique thought, or uttering a single word against the official groupthink line.

If there were intellectual honesty left in the world and if we had a competent group of reporters and journalists actually interested in uncovering the truth and informing the public, politicians and experts would be inundated with questions about this phenomenon.

“Why do masks never make a significant difference?” “If masks are important enough to be mandated, why are the numbers the same or better in nearby areas without mandates?” “Since there is no observable beneficial impact from mask mandates, what is the end game to permanently removing them?”

Instead the questions are: “why didn’t you mandate masks sooner?”

It’s a vicious, unending cycle of idiocy, cowardice and incompetent groupthink. The arbiters of acceptable cultural opinion promote mask mandates, therefore politicians desperate to fit in must mandate them, without question.

It’s hard to see how this ever ends in the true anti-science areas, given the months and months of data accumulated showing no impact from masks and the complete disinterest in calling attention to it.