Connecting the Dots to Syria 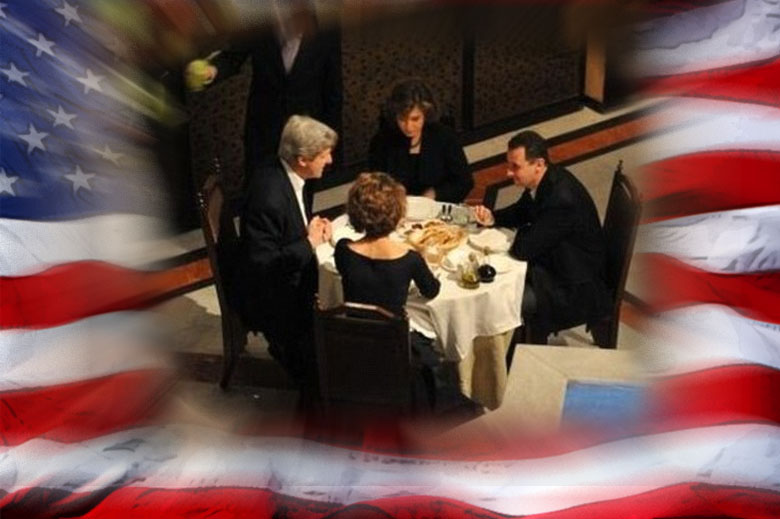 What You Are Seeing on TV

What You Are Not Seeing on TV

• Definitive and direct indisputable evidence that points to exactly who is responsible for such atrocities.

While we are being fed steady and regular servings of emotionally triggering and upsetting images to rally public support for humanitarian intervention intended to bring an end to such crimes against humanity, one thing remains uncertain, exactly who is in fact responsible?

Despite the abundance of photographic and video imagery that such heinous acts have been perpetrated, no definitive proof of culpability has been placed at the feet of Syrian President Bashar al-Assad and his regime.

I am in no way defending the Assad regime, but only urging you not to be so easily led down a particular path.

A lot is being left out of the MSM coverage especially now regarding the debates of whether or not to intervene. With international support all but evaporating the president has stepped back from his line-in-the-sand ultimatum to punt the discussion to Congress (which by adherence to the Constitution should have been step one in the first place).

I am offering the following series of points in very simple terms that may help to connect the dots to create a clearer picture of where we now find ourselves. Please dig down further for more detailed information. In brief:

The following  from an article on zerohedge.com

In 2009 – the same year former French foreign minister Dumas alleges the British began planning operations in Syria – Assad refused to sign a proposed agreement with Qatar that would run a pipeline from the latter’s North field, contiguous with Iran’s South Pars field, through Saudi Arabia, Jordan, Syria and on to Turkey, with a view to supply European markets – albeit crucially bypassing Russia. Assad’s rationale was “to protect the interests of [his] Russian ally, which is Europe’s top supplier of natural gas.”

Instead, the following year, Assad pursued negotiations for an alternative $10 billion pipeline plan with Iran, across Iraq to Syria, that would also potentially allow Iran to supply gas to Europe from its South Pars field shared with Qatar. The Memorandum of Understanding (MoU) for the project was signed in July 2012 – just as Syria’s civil war was spreading to Damascus and Aleppo – and earlier this year Iraq signed a framework agreement for construction of the gas pipelines.

The Iran-Iraq-Syria pipeline plan was a “direct slap in the face” to Qatar’s plans. No wonder Saudi Prince Bandar bin Sultan, in a failed attempt to bribe Russia to switch sides, told President Vladmir Putin that “whatever regime comes after” Assad, it will be “completely” in Saudi Arabia’s hands and will “not sign any agreement allowing any Gulf country to transport its gas across Syria to Europe and compete with Russian gas exports”, according to diplomatic sources. When Putin refused, the Prince vowed military action.

So at this point finding himself with the upper hand, It would appear quite illogical for Assad to do something so reckless that would cause International intervention, would it not?

“I’ve already said I find it absolutely ridiculous that [Syrian] government’s armed forces, which today are actually on an offense mission and in some regions have already encircled the so-called rebels and are finishing them off, that the Syrian army has used prohibited chemical weapons,” Putin said.

“They know all too well that this could become a cause for sanctions and even for a military operation against them. That’s stupid and illogical.”

“We proceed from the assumption that if anyone has information that chemical weapons were used by the Syrian regular army, then such proof must be presented to the UN Security Council and the UN inspectors,” Putin said, stressing that the proof must be “convincing” and not based on“rumors” or any sort of “eavesdropped intelligence data,” conversations etc.

“Even in the US there are experts who question the reliability of the facts presented by the administration. These experts do not exclude the possibility that the Syrian opposition has conducted a pre-planned provocation in order to give their sponsors a reason for military intervention,” he acknowledged.

If the US is successful in getting rid of the Assad regime, it will be good for either the Saudis or Qatar (and possibly for both) and the Dollar, and not so good for Russia.  This is a strategic geopolitical conflict about natural resources, religion, power and money, more-so than it is about chemical weapons. But chemical weapons and humanitarian intervention, once again is how a military strike by the US is being sold to the public.

During a passionate speech in Washington last Friday, US Secretary of State, John Kerry called Assad a ‘thug and murderer,’ and urged the world to act. ‘History would judge us all extraordinarily harshly if we turned a blind eye to a dictator,’ Kerry insisted.

In a call to 120 Democratic congressmen Kerry called Assad a ‘two-bit dictator’.

He said that Assad ‘has now joined the list of Adolf Hitler and Saddam Hussein’ in deploying chemical weapons against his own people.

Here is a photo of US Secretary of State, John Kerry and his wife dining with Syrian Dictator Bashar al-Assad and his wife in 2009. source: dailymail.co.uk

Kerry portrait of Syria rebels at odds with intelligence reports

Secretary of State John Kerry’s public assertions that moderate Syrian opposition groups are growing in influence appear to be at odds with estimates by U.S. and European intelligence sources and nongovernmental experts, who say Islamic extremists remain by far the fiercest and best-organized rebel elements. source: reuters.com

Things aren’t exactly warming up between the Obama administration and Vladimir Putin, even as President Obama arrived in St. Petersburg for the G-20 summit.

The question may be al-Qaeda’s influence on the Syrian rebels, an issue Kerry has downplayed. source: usatoday.com

Russia says it has compiled a 100-page report detailing what it says is evidence that Syrian rebels, not forces loyal to President Bashar Assad, were behind a deadly sarin gas attack in an Aleppo suburb earlier this year. source: mcclatchydc.com

Where do we go from here?

The Obama administration is promising a limited military strike with no “boots on the ground” Although a large gathering a various military assets is taking place in the region.

The Telegraph reports that “the first cell of Syrian rebels trained and armed by the CIA is making its way to the battlefield, President Barack Obama has reportedly told senators. During a meeting at the White House, the president assured Senator John McCain that after months of delay the US was meeting its commitment to back moderate elements of the opposition. Mr Obama said that a 50-man cell, believed to have been trained by US special forces in Jordan.” source: telegraph.co.uk

The deployment of the rebel unit seems to be the first tangible measure of support since Mr Obama announced in June that the US would begin providing the opposition with small arms.

Congressional opposition delayed the plan for several weeks and rebel commanders publicly complained the US was still doing nothing to match the Russian-made firepower of the Assad regime.

Mr McCain has been a chief critic of the White House’s reluctance to become involved in Syria and has long demanded that Mr Obama provide the rebels with arms needed to overthrow the regime.

So is a military strike on Syria a response to the use of chemical weapons or has Assad and his regime been a target for some time now?

During an interview with Newsmax, three-time presidential adviser Pat Buchanan joined the growing number of mainstream voices now specifically labeling the recent chemical attacks in Syria as a false flag.
“…First, this thing reeks of a false flag operation,” said Buchanan. “I would not understand or comprehend that Bashar al-Assad, no matter how bad a man he may be, would be so stupid as to order a chemical weapons attack on civilians in his own country when the immediate consequence of which might be that he would be at war with the United States. So this reeks of a false flag operation.
source: storyleak.com

There is so much information on this issue to be dug up. Stay tuned for developments and continue to ask more questions.

The New York Times: “American officials said Wednesday there was no ‘smoking gun’ that directly links President Bashar al-Assad to the attack, and they tried to lower expectations about the public intelligence presentation.”

U.S. Representative Kurt Schrader: “I see no convincing evidence that this is an imminent threat to the United States of America.”

U.S. Representative Ted Poe: “Mr. President, you must call Congress back from recess immediately to take a vote on a military strike on Syria. Assad may have crossed a red line but that does not give you the authority to redline the Constitution.”

Joe Biden, during a television interview in 2007: “The president has no constitutional authority … to take this nation to war … unless we’re attacked or unless there is proof we are about to be attacked.  And if he does, if he does, I would move to impeach him.”

6 thoughts on “Connecting the Dots to Syria”