The man who released the Zapruder Film and proved a conspiracy……. more Dots to Connect 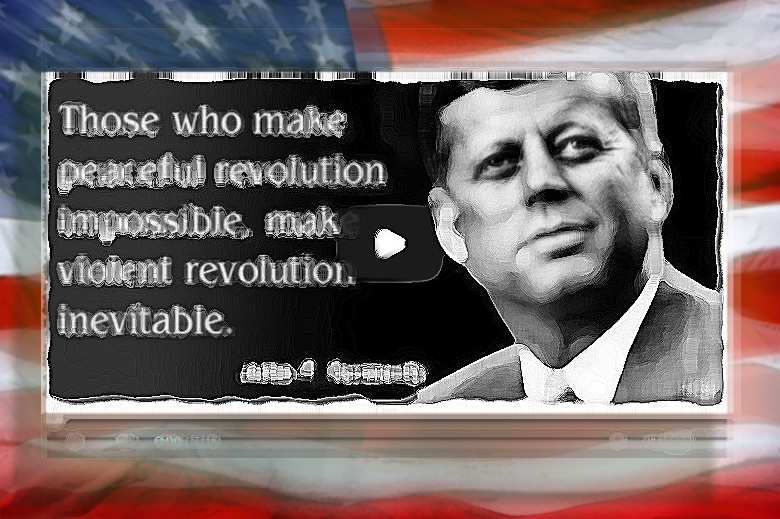 In step with the 50th Anniversary of John F. Kennedy’s assassination We Are Change releases this eye-opening short interview with  Robert Groden, the man who released the infamous Zapruder Film.

The government wanted it suppressed. The Zapruder Film more than any other piece of evidence shows that the fatal shot came from the front and blew the president to the rear………Of course the official version at the time was that all the shots were fired from behind. This proves that that wasn’t true.

And as always, some of the most eyebrow-raising thought provocation comes from the comments after such articles, such as the following form the YouTube post:

What do JFK, Lincoln and Andrew Jackson’s assassination attempts all have in common?  They all messed with the Central Bank.
It doesn’t matter whether you are a Middle-Eastern country who stops trading oil in dollars or the American President who dared to introduce silver certificates to rival Fed fiat notes, you paint a target on your head for a wealthy elite who truly control the corrupt political classes of the world

James Corbett of CorbettReport.com lends some insight into the JFK Assassination.

Nothing from Kennedy’s background prior to his assuming office in 1961 would have given one any reason to believe that he would pose any serious threat to the establishment. After all, the famed Kennedy fortune had been accumulated entirely within the framework of that establishment.

But the image that might once have been painted of Kennedy as just another toady of the establishment has since been obliterated. In every respect, the documentary record shows that behind the scenes, Kennedy’s experiences were transforming him into a significant roadblock to that establishment which had placed him into power.

In this 48 minute documentary, James Corbett of CorbettReport.com digs deep into who Lee Harvey Oswald really was. Was he a poor, disgruntled loner or an overachieving marine? A presidential assassin or a sheep-dipped patsy?

It depends who you want to believe. You can take him at face value or you can listen to the same people who sold you the Gulf of Tonkin, incubator babies and WMDs in Iraq, Jessica Lynch, and a million other lies.

Yes, that’s Dan Rather. Yes, the same Dan Rather who rose to prominence for his reporting on the ground in Dallas during those hectic few days surrounding the assassination of Kennedy, the capture of Oswald, Oswald’s own death. The same Dan Rather who, as one of the first and only people in the world to see the now-infamous Zapruder film before it was locked up by Skull & Bones / CIA asset Henry Luce’s Time/Life for 12 years and hidden away from the public, used that occasion to rush back to the studio so he could lie about it on air.

And that was the American public’s perception of the murder of their president for over a decade, until they actually had the chance to see it with their own eyes, presented courtesy of none other than Geraldo Rivera.

There, on live TV, the public witnessed not just the grisly death of the president, but with their own eyes they saw how an entire web of lies had been spun around JFK’s death

But why? Why the lie? Why the rush to capture, kill and posthumously indict this man: Lee Harvey Oswald? And if he wasn’t who they said he was, then who was he really?

Also James Corbett interviews Lisa Pease a long-time researcher on Cold-War History and Assassinations to discuss the curious official story of Lee Harvey Oswald, alleged assassin of JFK. We dissect the myths that the Warren Commission spun about his life and background and examine the truth of his defection to the Soviet Union and his connections to the CIA in greater detail.

• Hear the interview at CorbettReport.com