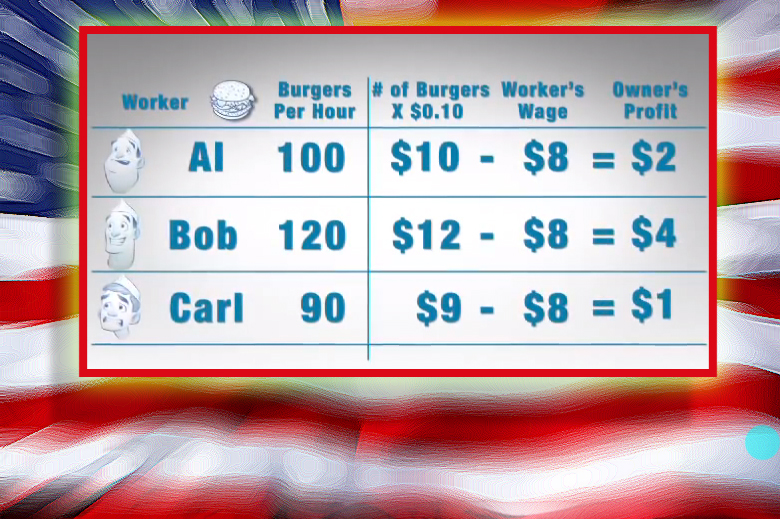 Halfway through his second term as President, Barack Obama in his latest State of the Union Address announced his solution to the economic woes that have been plaguing the nation since the crisis started in 2008. His plan: Raise the Minimum Wage.

This is more political ploy than the least bit economically sound in any sense. It is nothing more than a politician pandering to his electorate to keep them pacified. At a time when more Americans than ever are looking to the government for their means of survival it is no surprise that there are many clamoring for a governmental mandate to increase their wages.

Lets drop any heir of political correctness here and analyze this with cutting candor.

Some workers in entry-level minimum wage jobs are demanding and in some cases striking for an increase to a “living wage” claiming that they cannot support a family on $7.50 per hour. There are two questions among many others that immediately surface.

To the first point, if all your labor is worth to the market is the minimum wage perhaps you should not be starting a family until you have transitioned from your entry-level job into a better position. And why is it that after 12 years of education that is all the average high school graduate’s labor is worth in the marketplace? Why are not more economically productive and valuable skills taught throughout early education?

These  minimum wage entry-level positions are often jobs that were at one time filled by teens or students working through their education or another transitional phase. These jobs gave young people real-world skills and experience that could be valuable stepping stones into their futures.

More and more people who once could have been employed in living-wage middle class jobs are forced to take these jobs that happen to be the only ones available to them at the minimum wage.

Part of the blame here certainly lies with our own government who through trade agreements such as NAFTA has shipped millions of jobs overseas. These jobs will not be coming back.

While the president is out campaigning with his superficial pacifications to his electorate he has been secretly negotiating the Trans Pacific Partnership. This new  international pact is part of the new Asian Pivot occasionally touted by the administration. The TPP is getting absolutely no coverage whatsoever in the mainstream media. This new arrangement is focused more on international legal protections for corporations and will be even more devastating to the American middle class.

• see links below for further information on TPP

Back to the minimum wage. Let’s look at this now from another angle and uncover the real culprit.

In simplest terms, since the creation of the unFederal Reserve in 1913 the US Dollar has lost 95% of its purchasing power. After fighting a revolution to free themselves from control of private central banks, and several successive attempts to stave them off, Congress acquiesced the power to coin the nation’s money explicitly granted to them in the Constitution and handed it back to a cartel of private central banks. (a whole can of worms for another collection of posts & pages)

Since that time, endless money-printing (creation of money out of thin air and lent to the government at interest) has created an ever increasing debt burden as well as a gradual debasement of the currency.

Before I digress again, let’s simplify and shorten the timeline to our present generation.

Let me be clear: if the minimum wage had stayed at a mere $1.25 an hour and the central bank had not debased the money supply forcing the reduction or removal of the silver content, minimum wage workers would have been roughly two or three times better off  today in terms of real purchasing power than they currently are with a nominal minimum wage nearly six times the nominal amount prior to 1966.

Because of money supply inflation, the minimum wage is nearly six times as high…but buys roughly half as much…or less.

Put another way, a pre-debasement quarter can still buy you a gallon of gas…with change left over.

A real gauge of the value of money can be simplified in terms of units of one’s own labor.

Where the Real Blame Lies

So, it would appear to anyone in the pot of water being slowly brought up to a boil, that the real culprit is  inflation and currency debasement slowly but surely robbing and destroying the purchasing power of the people. That along with an ever-increasingly onerous tax burden on the fruits of one’s labor makes it more and more difficult to stay one step ahead.

And now with savings’ rates being suppressed, savers are actually loosing even more purchasing power.

The more you start poking around for answers, the deeper and deeper down the rabbit hole you’ll find yourself.

So while politicians like to sound as though they are looking out for everyone towards the bottom of the economic food chain, are they actually doing anyone any good by arbitrarily mandating an increase to wages? If raising the minimum raise will fix the economy, why stop at $10? Make it $20 or even $50?

To that point if more money slushing around in the pockets of the consumer is the answer, why has the unFederal Reserve been handing 85 billion per month to the banks and not the people? Hmmm..another rabbit hole…

Ultimately it comes down to the value of that labor that the worker offers a business. If a particular job does not create value at the higher rate, the job will simply disappear or be priced out of existence.

The following video from LearnLiberty.org offers an interesting perspective and explains how the minimum wage actually hurts workers.

And for an edgier point of view served with a sprinkle of cutting humor:

More on The unFederal Reserve

On the eve of the 100th anniversary of the passage of the Federal Reserve Act we talk to G. Edward Griffin, author of The Creature from Jekyll Island, about America’s central bank. We discuss the origins and functions of this monstrosity, as well as its role in maintaining and expanding the wealth and power base of the banking cartel that own and operate it. We also discuss the growing public awareness of the Fed and the rising movement of those seeking to abolish it.

• link to interview on the Corbett Report

Everything you need to know about the Trans Pacific Partnership

STUDY: Media Leave Viewers In The Dark About Trans-Pacific Partnership

Rather Than Jobs Creator, TPP is the Biggest Corporate Power Grab