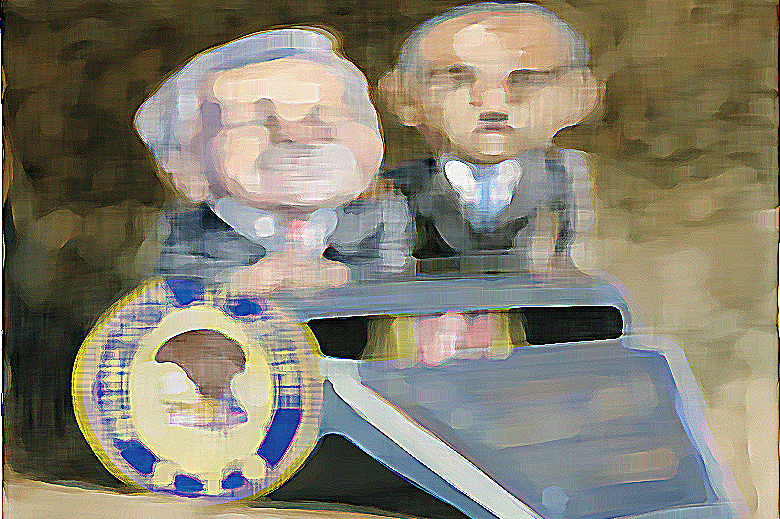 Just like in the days leading up to the financial crisis of 2008, the big banks (who merely received a slight tap on the wrist for fraud and criminality) are at it again issuing sub-prime loans. This time they are pushing auto-loans to anyone who shows up with a pulse and able to hold a pen to sign on the dotted line. And hold tight as they are finally loosening standards yet again getting ready to make a 3% down-payment acceptable for a mortgage.

The reality of our present situation is that nothing since then has really been fixed. The symptoms have been papered over and made to look all better. Banks that were insolvent in 2007-2008 are in worse shape now and even more levered-up. The talking heads and the Mainstream Media have done a fine job of distracting and soothing the people into thinking all is well. Before getting too involved in our present dilemma, let’s focus on some of the fraud and corruption that has gotten us to this point.

Alayne Fleischmann, a former lawyer at JPMorgan Chase, whose testimony helped secure a $13 billion fine for the bank, says that most big-time fraudsters have got away scot-free, and claims that only continued public interest can ensure they are punished.

In 2006, Fleischmann worked in a team that repackaged individual home loans as securities. She witnessed a host of violations, including never-to-be-repaid subprime loans being mis-sold as reliable investments, helping to heat the market that sparked the worldwide financial crisis in 2008.

For years, she has been communicating her testimony to investigators, only to see the authorities and other companies strike deals with the rule-breaking giants, meaning that the public never got to hear about the specifics of the rampant infringements at JPMorgan Chase. She did, however, help the RMBS Working Group, a mortgage fraud task force set up in 2012, to extract the biggest fine in banking history – $13 billion (it has since been surpassed by Bank of America’s $17 billion fine for similar offenses). But JPMorgan’s chief executive since 2004, Jamie Dimon, has not resigned, and the company itself is in rude health, registering profits of nearly $18 billion last year.

Fleischmann outed herself to Matt Taibbi, a campaigning journalist at Rolling Stone. The currently unemployed lawyer believes that Dimon and others in the industry can still be made to pay for their evident crimes….

After graduating from Cornell Law School and working for top-tier legal firms, the Canadian-born Fleischmann was hired as a transaction manager by the biggest US bank in 2006. Her job was to supervise the quality of the mortgages the bank bought and bundled into securities, which were to be sold to other financial institutions, such as pension funds.

Almost straight away, she noticed things amiss. Her new superior, a diligence specialist, was meant to shine a light on any suspicious mortgage packages – instead he was more focused on leaving no paper trail for a potential prosecution….

She also became dubious about the quality of the products JPMorgan Chase was selling. A particular issue was with $900 million worth of loans that came in a package from the mortgage company GreenPoint.

Forty percent of the loans appeared to have been made on overstated incomes, including Fleischmann’s most memorable example of a manicurist who claimed to have an income of $117,000 a year – more than five times the national average…

As a result of JP Morgan’s decision to sell these loans despite knowing they were defective, Taibbi said Americans suffered dramatically.

“Everyone who bought them experienced massive losses,” he told Thom Hartmann.“What a lot of people don’t understand in the financial crisis is that if you have a pension, or you were involved in a mutual fund or your state’s retirement fund was invested in mortgage backed securities, you probably woke up at some point in late 2008 and noticed that 30 to 40 percent of that fund had disappeared. In large part, this was because banks like Chase and other companies were selling these defective products to investors, and they were experiencing massive defaults and massive losses.”

She tried to stay quiet, she really did. But after eight years of keeping a heavy secret, the day came when Alayne Fleischmann couldn’t take it anymore.

“It was like watching an old lady get mugged on the street,” she says. “I thought, ‘I can’t sit by any longer.'”

Fleischmann is a tall, thin, quick-witted securities lawyer in her late thirties, with long blond hair, pale-blue eyes and an infectious sense of humor that has survived some very tough times. She’s had to struggle to find work despite some striking skills and qualifications, a common symptom of a not-so-common condition called being a whistle-blower….

Fleischmann is the central witness in one of the biggest cases of white-collar crime in American history, possessing secrets that JPMorgan Chase CEO Jamie Dimon late last year paid $9 billion (not $13 billion as regularly reported – more on that later) to keep the public from hearing.

Back in 2006, as a deal manager at the gigantic bank, Fleischmann first witnessed, then tried to stop, what she describes as “massive criminal securities fraud” in the bank’s mortgage operations….

Six years after the crisis that cratered the global economy, it’s not exactly news that the country’s biggest banks stole on a grand scale. That’s why the more important part of Fleischmann’s story is in the pains Chase and the Justice Department took to silence her.

This past year she watched as Holder’s Justice Department struck a series of historic settlement deals with Chase, Citigroup and Bank of America. The root bargain in these deals was cash for secrecy. The banks paid big fines, without trials or even judges – only secret negotiations that typically ended with the public shown nothing but vague, quasi-official papers called “statements of facts,” which were conveniently devoid of anything like actual facts.

And now, with Holder about to leave office and his Justice Department reportedly wrapping up its final settlements, the state is effectively putting the finishing touches on what will amount to a sweeping, industrywide effort to bury the facts of a whole generation of Wall Street corruption. “I could be sued into bankruptcy,” she says. “I could lose my license to practice law. I could lose everything. But if we don’t start speaking up, then this really is all we’re going to get: the biggest financial cover-up in history.”

…..In other words, this was the very bottom of the mortgage barrel. They were like used cars that had been towed back to the lot after throwing a rod. The industry had its own term for this sort of loan product: scratch and dent. As Chase later admitted, it not only ended up reselling hundreds of millions of dollars worth of those crappy loans to investors, it also sold them in a mortgage pool marketed as being above subprime, a type of loan called “Alt-A.” Putting scratch-and-dent loans in an Alt-A security is a little like putting a fresh coat of paint on a bunch of junkyard wrecks and selling them as new cars. “Everything that I thought was bad at the time,” Fleischmann says, “turned out to be a million times worse.” (Chase declined to comment for this article.)

…..This moment illustrates the most basic element of the case against Chase: The bank knowingly peddled products stuffed with scratch-and-dent loans to investors without disclosing the obvious defects with the underlying loans.

…..As it turned out, of course, Chase was selling those rotten dog-meat loans all over the place. How bad were they? A single lawsuit by a single angry litigant gives some insight. In 2011, Chase was sued over massive losses suffered by a group of credit unions. One of them had invested $135 million in one of the bank’s mortgage–backed securities. About 40 percent of the loans in that deal came from the GreenPoint pool.

The lawsuit alleged that in just the first year, the security suffered $51 million in losses, nearly 50 times what had been projected. It’s hard to say how much of that was due to the GreenPoint loans. But this was just one security, one year, and the losses were in the tens of millions. And Chase did deal after deal with the same methodology. So did most of the other banks. It’s theft on a scale that blows the mind.

…..Instead, the government decided to help Chase bury the evidence. It began when Holder’s office scheduled a press conference for the morning of September 24th, 2013, to announce sweeping civil-fraud charges against the bank, all laid out in a detailed complaint drafted by the U.S. attorney’s Sacramento office. But that morning the presser was suddenly canceled, and no complaint was filed. According to later news reports, Dimon had personally called Associate Attorney General Tony West, the third-ranking official in the Justice Department, and asked to reopen negotiations to settle the case out of court.

It goes without saying that the ordinary citizen who is the target of a government investigation cannot simply pick up the phone, call up the prosecutor in charge of his case and have a legal proceeding canceled. But Dimon did just that.

…..But the idea that Holder had cracked down on Chase was a carefully contrived fiction, one that has survived to this day. For starters, $4 billion of the settlement was largely an accounting falsehood, a chunk of bogus “consumer relief” added to make the payoff look bigger. What the public never grasped about these consumer–relief deals is that the “relief” is often not paid by the bank, which mostly just services the loans, but by the bank’s other victims, i.e., the investors in their bad mortgage securities.

…..The average person had no way of knowing what a terrible deal the Chase settlement was for the country. The terms were even lighter than the slap-on-the-wrist formula that allowed Wall Street banks to “neither admit nor deny” wrongdoing – the deals that had helped spark the Occupy protests. Yet those notorious deals were like the Nuremberg hangings compared to the regulatory innovation that Holder’s Justice Department cooked up for Dimon and Co.

…..Because after all this activity, all these court actions, all these penalties (both real and abortive), even after a fair amount of noise in the press, the target companies remain more ascendant than ever. The people who stole all those billions are still in place. And the bank is more untouchable than ever – former Debevoise & Plimpton hotshots Mary Jo White and Andrew Ceresny, who represented Chase for some of this case, have since been named to the two top jobs at the SEC. As for the bank itself, its stock price has gone up since the settlement and flirts weekly with five-year highs. They may lose the odd battle, but the markets clearly believe the banks won the war. Truth is one thing, and if the right people fight hard enough, you might get to hear it from time to time. But justice is different, and still far enough away.

You really owe it to yourself and your children to read the entire story to grasp the depth of fraud, corruption and criminality present in the ranks of those pulling the strings.

Matt Taibbi on why bankers will always stay out of jail