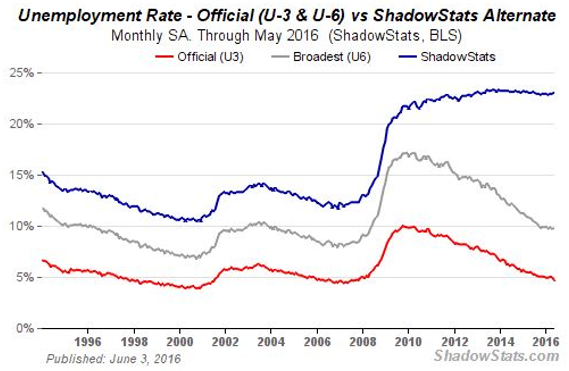 by James Dale Davidson via TheSovereignInvestor.com,

“When it becomes serious, you have to lie.”
— Jean-Claude Junker, President of the European Commission.

Normally, I would not bring a European politician into a discussion about the U.S. economy. But in this case, European Commission President Jean-Claude Junker has “let the cat out of the bag.” In an unguarded moment, Junker let slip the working principle that guides politicians everywhere.

Is there any more serious issue for U.S. politicians than convincing you to give them your vote? You know that most voters in our intervention-addicted world credit politicians for prosperity they enjoy during their time in power. Just as primitive tribes credit the local chief or high priest for prosperity — or blame his sins when bad weather or pestilence make living conditions difficult.

Is there any more serious issue for you than understanding how you can preserve and build your capital in an uncertain world? Without capital, you are in danger of sinking to the level of the billions of Indians and Chinese whose livelihoods depend on their ability to rent their time. Not a happy prospect.

A crucial characteristic of the world that could make both the politicians’ dreams of power and your dreams of secure retirement come true would be the resumption of rapid economic growth — as reflected in both GDP accounting and employment reports.

Unhappily, the news on that score is far from encouraging…

In fact, a close reading of the data suggests that economic growth is negligible, and the real unemployment rate is about 23%.

But upon inspection, you can see that the alarming 23% ShadowStats unemployment rate is merely unemployment calculated as it was until the Kennedy administration, when out-of-work Americans who had suspended an active search for jobs — primarily because none could be found — were relabeled “discouraged workers” and dropped from the tally of the unemployed.

In 1994, the Bureau of Labor Statistics (BLS) redefined the workforce to exclude all but the small percentage of the discouraged who had been seeking work for less than a year. The longer-term discouraged — some 4 million U.S. adults — disappeared into a statistical black hole.

Clinton also reduced the sample-sized employed in the household survey that determines the unemployment rate — excluding a disproportionate share of inner-city households who were less likely to have jobs.

Over the years, American politicians have used statistical sleight of hand to protect themselves from the angry mobs of voters in a way that the witch doctors and high priests of the past could only envy.

In the old days, when the rains didn’t come and the crops failed, the high priests could not fool anyone by merely issuing a proclamation thanking the gods for bumper crops.

Today, Obama proclaims a “vigorous recovery” and The New York Times pretends to believe it.

If you are a connoisseur of government press releases — and you actually believe them — you may imagine that the U.S. has been enjoying a “vigorous recovery,” as Barack Obama never tires of pretending.

That is what the government reported.

But a closer look at the data reveals something else.

458,000 People Disappeared From the Labor Force

This highlighted a record monthly surge of 664,000 persons of working age dropping out of the workforce. As of May, workforce dropouts hit a record high of 94.7 million.

In other words, the reason that the unemployment rate fell was that lots of people were either defined into a “black hole” or voluntarily left the workforce.

To the contrary, the headline gain of 38,000 net jobs reported in the Labor Department’s payroll survey was comprised entirely of fake jobs.

John Williams of Shadow Government Statistics has parsed the BLS numbers carefully. He reports that the BLS inflates its monthly account of new hires with approximately 200,000 fake jobs, including jobs conjured up by its so-called “Birth/Death Model” that are meant to account for new employment in startup companies that are too new to count.

Notwithstanding the fact that the BLS has been adding an average of 200,000 fake jobs to the monthly payroll report in recent years (as confirmed by the March 2015 benchmark downside revisions that subtracted 206,000 jobs), the actual employment picture has become so weak that they have brazenly added additional monthly upside biases.

Donald Trump has tried to advance the national conversation by underscoring a point that should be evident to any thinking person. Namely, that the “recovery” the establishment is so keen to have you embrace is a fraud.

If elected president, Trump promises to draw back the veil of statistical flummery that disguises reality for credulous people. Trump is the first candidate in my memory to say he “will investigate the veracity of U.S. economic statistics produced by Washington — including ‘the way they are reported.’”

No wonder the establishment hates him.

As George Orwell, the author of 1984, put it: “The further a society drifts from truth, the more it will hate those that speak it.”

Let’s look more closely to see why my comments and those of Donald Trump on the employment situation are not merely impudent name-calling, but sober conclusions informed by the facts.

Start with the issue of business dynamism that lies at the heart of a lot of statistical mischief in government pronouncements on the job market.

As economists Ian Hathaway and Robert E. Litan pointed out in research conducted for the Brookings Institution: “Historically one new business is born about every minute, while another one fails every 80 seconds.”

Since the Great Recession, not so much. Now there are more failures than startups.

Business dynamism in the U.S. has been in long-term decline, so not all of the recent problems of entrepreneurial stagnation could be fairly attributed to Barack Obama. Nonetheless, extensive research shows that the old ratio of business births to deaths no longer holds.

The rate of business dynamism collapsed when the subprime bubble popped. Obama’s presidency is the first to see more firms go out of business than created. As you will readily understand, it makes a difference in a supposed “economic recovery” if business deaths run considerably ahead of new firm formations.

You might think that if the Brookings Institution can figure out that more firms are going out of business than are being created, then that insight should not elude the BLS. But it has, primarily because it gives the lie to the fake job strength the BLS ballyhoos every month.

Obama’s bean counters add about 200,000 (now 224,000) imaginary jobs each month through the “Birth/Death” model that continues to suppose — contrary to the evidence — that more jobs were created in new firms (births) than lost in firms going out of business (deaths). These fake jobs account for a big percentage of the growth in employment announced by the BLS.

The bottom line is that at least 4.5 million jobs announced during the Obama presidency never existed. They were statistical adjustments inserted in the data reflecting outdated historical ratios that no longer hold true.

But this is only part of the story.

The Brookings data, along with surveys conducted by Gallup, show that far from adding 200,000 jobs through the “Birth/Death” model, a more accurate report would have subtracted 70,000 jobs a month to account for the jobs that disappeared when firms died.

I should point out that might actually be a low estimate, as the BLS inflates jobs estimates with seasonal-adjustment shenanigans that result in double counting of the same fake jobs, and other frauds that are too complicated to get into here.

Fake Employees Are Not Paid

You don’t need to be a Nobel Prize-winning economist to realize that fake employees cannot form the basis of a strong economy. Employers are not writing checks to employees that don’t exist outside of statistical models. The income those imaginary employees would be earning if they were real is not being spent at the businesses that are going out of business by the hundreds of thousands each year.

And, inevitably, if business deaths continue to outstrip business formations in an environment of slack consumer demand, the result to be expected is economic collapse.

That could be why financial stocks have been underperforming.

Yet another telltale hint of the large number of fake jobs is the declining productivity that seems to puzzle so many mainstream economists.

Duh. Of course productivity is disappointing.

The millions of fake employees aren’t actually doing much heavy lifting, are they? The fake jobs obviously skew the denominator for calculating productivity growth. All the actual work is done by real employees who show up, not by statistical hypotheses.

A Turn for the Worse?

Be smart about it. You owe it to yourself to think about what it means when the government announces an increase of just 38,000 payroll jobs in a month when they ramped up the total of fake jobs to 224,000.

The mainstream economists took a variety of tacks to explain and rationalize this. Some blamed the Verizon strike for the weak payroll number. Others took the ridiculous view that an increase of only 38,000 payroll jobs in the month meant the U.S. economy was approaching “full employment,” meaning that wages would soon rise rapidly. What piffle!

You can do the arithmetic. And even if you can’t, John Williams has done it for you.

Far from getting stronger, the economy is lurching to the downside. The politicians can disguise some of the weakness with dishonest statistics. Even so, reality inevitably begins to shine through.

Adjust your portfolio to reflect the rising prospect of acute weakness in an already bankrupt economy.

The long-term decline in median income, amplified in 2016 by the biggest drop in weekly earnings in history, puts the lie to the pretense of self-sustaining recovery. Average people don’t have enough discretionary income to sustain expanded economic activity.

If you have your wits about you, you will take the hint.

One thought on “Fake Jobs Plague The U.S. Economy”