Why Do So Many Still Buy Into the Narrative? Mass Formation-Mattias Desmet 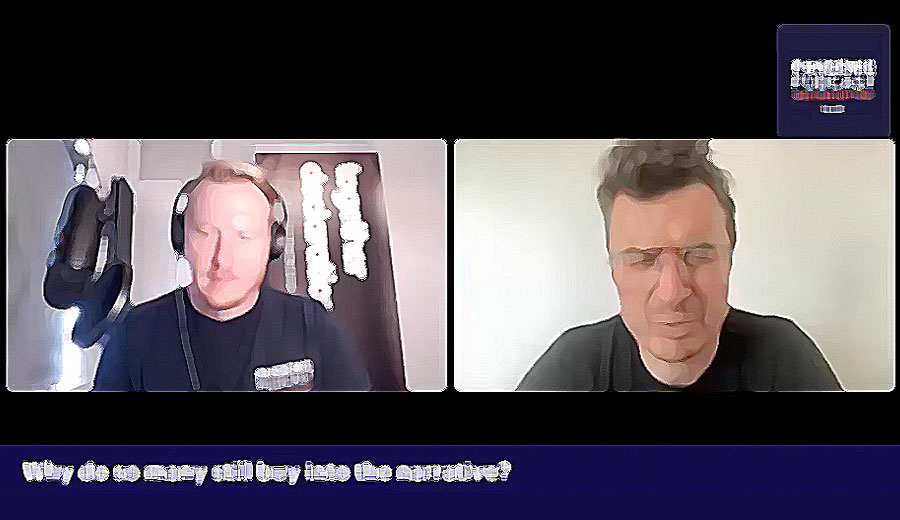 Does it sometimes feel like you’re surrounded by people who’ve been hypnotised in some way? Well, maybe you are.

My guest tonight is Mattias Desmet, Professor of Clinical Psychology at Ghent University in Belgium, and his observations over the past 18 months have led him to conclude that the overwhelming majority have indeed fallen under a kind of spell.

Except it’s not actually a spell, of course: the term for it is ‘mass formation’ and right now it’s manifesting as a psychological response — not unlike hypnosis — to the unrelenting, single-focus campaign of fear to which we have all been subjected.

I will explore with Mattias what triggers and sustains this mass response, where it could ultimately lead us, why a minority somehow manages to remain unaffected, and whether there’s anything we can collectively do to break the spell before it’s too late.

Please also make sure you have signed and shared the Together Declaration http://www.togetherdeclaration.org

Understanding the Psychology Behind the Covid Pandemic

In the video above, Dr. Robert Malone, inventor of the mRNA and DNA vaccine core platform technology,1 reviews a theory professor Mattias Desmet, a Belgian psychologist and statistician, believes explains the absurd and irrational behavior we’re now seeing worldwide with regard to the COVID pandemic and its countermeasures.

He calls this phenomenon “mass formation psychosis,” a type of crowd hypnosis that results in literally converting a large segment of the population into psychosis. Mass formation psychosis is the explanation for how the Germans accepted the atrocities by the Nazi party in the 1930s, and it’s the explanation for why so many around the world support medical apartheid and the destruction of the unvaccinated now.

It’s so irrational and inhumane, many have wondered how we got here. As it turns out, the psychology of totalitarianism has been studied for decades, and the whole thing is in fact explainable as a psychiatric phenomenon that arises when certain conditions exist in a society.

The Four Base Conditions for ‘Mass Formation’

The four central conditions that need to exist in order for mass formation psychosis to take root are:

1.Lack of social bonding — Social isolation was a widespread problem long before the pandemic. In one survey, 25% of respondents said they didn’t have a single close friend. The COVID lockdowns also contributed and worsened already existing isolation. We were all told that any contact with others, including members of our own family, could be a death sentence.

2.Seeing life as meaningless, purposelessness and senseless, and/or being faced with persistent circumstances that don’t make rational sense — Desmet cites research showing that half of all adults feel their jobs are completely meaningless, providing no value to either themselves or others.

In another poll, done in 2012, 63% of respondents said they were “sleepwalking” through their workdays, putting no passion into their work whatsoever. So, condition No. 2 for mass formation hypnosis was also fulfilled, even before the pandemic hit.

Events that occurred in late 2019 and early 2020, such as the many questions surrounding the presidential election and the initial COVID lockdowns, added fuel to the widespread confusion and uncertainty, resulting in the next condition: free-floating anxiety.

Many felt, and still feel, that “things just aren’t right.” Through 2020, it became increasingly apparent to many that most if not all of the systems we depend on are broken, and likely broken beyond repair, including our medical system, our voting system and our judicial system.

When these four conditions are fulfilled by a large enough portion of society, they are ripe for the picking to convert to a psychosis, being totally out of touch with reality, which in turn leads to the rise of totalitarianism. As explained by Malone, when the pandemic broke out, people around the world became obsessed with one thing: the virus.

People everywhere thought about, read about and talked about the virus almost exclusively to everything else. This singular focus, this obsession, having the base conditions for mass formation already firmly in place, allowed for large portions of the population to enter into a hypnotic-like state.

In that hypnotic-like state (it’s very similar to conventional hypnotism but with minor differences), people lose their ability to have rational thought and judgment.

As noted by Malone, there is evidence that suggests at least parts of this psychological operation were done intentionally, by “some entity that has financial benefit or power to gain from doing this, which gets to the point of global totalitarianism.” Now, once a large portion of a society is hyper-focused on and fused in their joint discontent and anxiety, all a leader or leaders need to do to convince many that totalitarian control and loss of their freedom is best for them is to:

a)Present a story in which the cause of the anxiety is identified, and then

b)Offer a strategy for neutralizing that cause

By accepting and participating in whatever that strategy is, people with free-floating anxiety feel equipped with the means to control their anxiety and avoid panic. They also feel a strong bond with others, because they’ve all identified the same nemesis. As explained by Desmet in the Peak Prosperity interview below:

“Because many people participate in the same strategy to deal with the object of anxiety, a new kind of social bond emerges a new kind of solidarity. So, people feel connected again in a new way. And that’s actually the most crucial thing.

If you look at the corona crisis and listen to the mainstream narrative, you will hear that everything is about solidarity. You have to participate, you have to accept the vaccine. You have to respect social distancing, because if you don’t, you lack citizenship, you show no solidarity. That’s the most crucial thing, always, in mass formation.

There’s [also another] advantage. All the frustration and aggression can be directed at an object. And that object is the people who, for one reason or another, do not want to participate in the mass formation …

So, you have this very strange situation where people start from a very negative and divisive mental state; [they have a] lack of social bond, lack of meaning-making, free floating anxiety and a lot of frustration and aggression.

They switch from this very highly aversive mental state to a symptomatic positive state where they feel connected. Their life makes sense again through this heroic struggle with the object of anxiety … That’s why people continue to believe in the narrative, even if it is utterly absurd.”

The crazy thing is that the story can be an obvious lie, yet those under this hypnotic spell will believe it. The remedy can be utterly absurd, yet they’ll obey. This is how totalitarianism is allowed to rise.

Of course, there must always be a common enemy that must be obliterated — the “cause” for the peoples’ fear and anxiety — and under totalitarian rule, that enemy is anyone who is not spellbound. The dissenters are the enemy. In 2021, the unmasked and unvaccinated are the enemy.

Mass formation psychosis is a very dangerous condition, both for those under its spell and those who aren’t, because the ‘mental intoxication’ that results makes people willing to do things that are clearly wrong and utterly immoral, up to and including voluntarily killing their own families and themselves, if told it’s for the greater good.

If everyone would just get the experimental jab, COVID would vanish and everyone could go back to feeling safe again. That’s the narrative. It makes no sense, it’s irrational, inhumane and unscientific, but those who are in mass formation psychosis believe it’s just that simple, and that’s why some are able to wish death on the unmasked and/or unvaccinated.

So, as noted by Malone, “If it seems to you that the rest of the world has gone mad, the truth is, they have.” A problem far greater than any virus now is mass formation itself.

It’s a very dangerous condition, both for those under its spell and those who aren’t, because the “mental intoxication” that results makes people willing to do things that are clearly wrong and utterly immoral, up to and including voluntarily killing their own families and themselves, if told it’s for the greater good. In short, masses of people become profoundly gullible and self-destructive, which is a frightening combination.

As noted by Desmet, in a dictatorship, people comply because they fear the dictator. In a totalitarian regime, however, mass formation psychosis is at work, and this gives the regime extreme power over the individual, as the people, when in this hypnotic trance, voluntarily destroy their own families, their lives and themselves, along with the stated enemy.

Malone says that in his conversations with Desmet, Desmet has said he believes the mass formation psychosis is so widespread at this point that global totalitarianism may be unavoidable. He believes it’ll take over, as we’re seeing in a number of countries already. So, what, if anything, can we do? A summary of suggestions are as follows:

•Continue providing true and accurate information to counter the false narrative. Some who aren’t yet fully hypnotized may still be routed back to sanity. Speaking out can also help to limit the atrocities the totalitarian regime is emboldened to implement, because in totalitarianism, atrocities and crimes against humanity increase as dissent decreases.

•Substitute fear of the virus narratives with narratives that highlight an even greater fear — fear of totalitarianism. “Totalitarianism is a bigger boogeyman than the virus is,” Malone says. “Losing control to Bill Gates, the World Economic Forum, BlackRock and Vanguard is a bigger threat than SARS-CoV-2 is for you and your children, by far.”

Desmet has tested this theory, and found you CAN break the hypnotic focus on COVID if you’re able to refocus their attention on something that’s of even greater concern to them.

•Join with other dissenters into larger groups. This gives the larger majority who aren’t fully hypnotized but too fearful to go against the grain an alternative to going along with the totalitarians.

The Gravity of Our Situation

To hear from Desmet himself, listen to his hour-long interview with Dr. Chris Martenson. As noted by Desmet, since self-destructiveness is built into the totalitarian system from the ground up, totalitarian regimes cannot be sustained forever. They fall apart as they’re destroyed from within. That’s the good news.

The bad news is it can be hell while it lasts, as totalitarianism built on mass formation almost always leads to heinous atrocities being committed in the name of doing good. There are usually few survivors at the end.

That said, Desmet believes this new global totalitarianism is more unstable than regional dictator-led totalitarian systems, so it may self-destruct faster. He has just finished writing a book, “The Psychology of Totalitarianism,” which is expected to be published in January 2022.